HANIF ABDURRAQIB IS an enthusiast. He writes essays and cultural commentary with as much fluidity and excitement for Carly Rae Jepsen as he does for Allen Iverson as he does for Ric Flair. He is a connoisseur of both sneakers (GQ interviewed him about it) and emo (see his essay on Fall Out Boy in his first essay collection, They Can’t Kill Us Until They Kill Us [2017]). And while the breadth and variety of his knowledge is as admirable as it is eclectic, he’s no fair-weather fan: his third book, Go Ahead in the Rain: Notes to A Tribe Called Quest (2019; New York Times best seller and National Book Award long lister), is a deep dive into the history of the peerless hip-hop trio, and their impact on him.

It’s perhaps not much of a surprise, then, that his poetry tends toward the rhapsodic and ecstatic. The subjects are as multifarious as those in his essays, but the emotional pitch is half an octave higher, and the forward motion of the poems is propelled by attention to the metaphoric possibilities of language. The sensation, in both of his collections of poems, is of a strong current muscling its way through a landscape. His right-branching sentences celebrate and/or lament, sprawling fluidly over multiple lines. His second collection of poems, A Fortune for Your Disaster, bears many of the hallmarks of his first: a tight focus on the people in his immediate vicinity, a tendency to let the lines spool out in search of epiphany or closure, a nascent tendency toward more explicit form; but in this new one, we see a poet more strongly in control of his gifts, and scrutinizing some of the skills and proclivities that got him to where he is. Though Abdurraqib is a romantic (he admits that sometimes “all it takes is one kiss & before morning, / you could scatter his whole mind across a field”), this collection is ultimately skeptical, wondering what kind of trouble — as well as what kind of ecstasy — romance and intimacy, writ large, can get one into.

There are many ways in which Abdurraqib contemplates this. Most of them come in the form of recurrent characters (Nikola Tesla, Marvin Gaye) or poems under the same title, for instance, “How Can Black People Write About Flowers at a Time Like This,” a series of interspersed poems that demonstrates the book’s — and Abdurraqib’s — dilemma: how to risk delight and appreciation amid such myriad dangers and losses? It’s an important question in general (and takes Jack Gilbert’s advice that “we must risk delight”), but especially for a black poet with a Qur’anic name living in the 21st century under systems that perpetuate physical and structural violence against black people.

One of the delights that guide this collection is, literally, magic. Christopher Nolan’s 2006 movie about British magicians, The Prestige, offers a good amount of architecture and iconography to the book (whose three-part structure is derived from the sequence of a good magic trick: the pledge, the turn, the prestige). For those who haven’t seen the movie, then, fair warning: spoilers ahead. For those who have, though, you know that the magic we encounter isn’t exactly harmless. For instance, Abdurraqib titles several poems “It’s Not Like Nikola Tesla Knew All Those People Were Going to Die.” This is because the machine that Tesla builds to assist a magician in performing a trick called “The Transported Man,” instead of teleporting the magician from one armoire to another, actually creates an exact replica of the magician inside the second armoire, before drowning the magician in the first. For each performance of the trick, the magician (or a clone of him) has to die. It’s pretty grisly. But it offers another way of thinking about what the transporting, transformative powers of poetry here, and memory elsewhere, are truly capable of. Rhapsody is great, but at what cost, and to whom?

This said, his poems don’t avoid using his powers for magic. In the first “How Can Black People Write About Flowers at a Time Like This,” the speaker is a “boy [who] look like a hollowed-out grandfather / clock” and “a million-dollar god with a two-cent / heaven.” Amid a run of surreal insults Abdurraqib conjures multiple meanings. This conjuring feels particularly important in a book that is mostly about loss and what can be found within it. The book orbits two losses in particular — a marriage and a mother — and though it extracts some of the strange delight that lives inside them, it also acknowledges the more sinister possibilities. For instance, in the poem “With Boxes Piled at the Foot of the Stairs, I Go to See Logan,” the speaker admits:

palm. It was sometime after
that, when I told his old girlfriend

I have maybe been in love
with you the whole time.

After all, as he says elsewhere, “Few things are more dangerous than a man / who is capable of dividing himself into several men, / each of them with a unique river of desire / on their tongue.” In The Prestige, desire divides the magician into selves that drown over and over again; here, it divides the speaker into someone who loved and respected his friend and someone who betrays him.

Marvin Gaye, in whose voice Abdurraqib writes several spectacular dramatic monologues, helps us contemplate this duality as well. When we first encounter him — “Play[ing] the Dozens with the Pop Charts” — he ridicules his peers (who “take the last chicken leg / & leave meat on the bone”), but then makes even more precise their differences: “everybody wanna make soul but don’t nobody wanna hemorrhage a whole family into sweat & white powder & so much sex that they will never speak of what killed you.” Like Tesla, Gaye is both an exemplary and cautionary tale, a man who knows that “once you make people believe that you got something they need, you can make them believe anything,” and that the unseen price for this easily exploited skill is a “grave, […] seduced […] out of thin air.” They both show us that love — for magic or greatness or music or people — is expensive. They both seem to ask: What are you willing to sacrifice for it?

A positive portrayal of love is still apparent, though. And not just the kind of romantic love the speaker is — rightfully — suspicious of throughout. Abdurraqib’s enthusiasm shines through, especially when talking about friends (the above betrayal notwithstanding). They’re the ones who, if no one else, will refract and remember the speaker and his many contradictory selves, this guy who when it rains “make[s] mirrors out of every surface / so that [he is] both [himself and all his friends].” And these friends help Abdurraqib contextualize his love for other things (like New Haven pizza, Radiohead, Blackstreet, and Journey’s “Don’t Stop Believin’” [1981]). It’s worth looking quickly at “None of My Black Friends Want to Listen to Don’t Stop Believin’,” a title as delightful and expansive as any in the book, allowing Abdurraqib to quickly enter the ecstatic territory he is most comfortable in. The final sentence sprawls over eight lines and finishes with:

& maybe all the songs we don’t want to sing out loud anymore
are about someone on a porch, wringing their hands together
& hoping a person who shares their blood cuts
through the night & walks into their arms.

The poem is a meditation on, among other things, how white performances of enjoyment are treated differently than black people’s. What’s most notable is how Abdurraqib adroitly channels the jittery energy of a late night out into such an affecting ending. The enjambment on “cuts” in the penultimate line is particularly dexterous. For a moment, it transforms the night into a body, and the blood of the loved one into a weapon, in a way that points out the violent dynamic black bodies are forced into, while also subverting it, empowering this person to defy the fate that being black unfairly but historically invites.

Another development worth noting is Abdurraqib’s subtle but noticeable expansion of his tonal range. Raised in the sincere climes of Ohio and emo, Abdurraqib doesn’t use explicit irony or humor in his writing very much (though his Twitter account is relentlessly and effortlessly entertaining). However, in “What a Miracle that Our Parents Had Us when They Could Have Gotten a Puppy Instead,” the speaker says offhandedly “every four years in america it becomes fashionable to make promises you can’t keep and so here i am again.” There’s no doubt that Abdurraqib has a lot to be serious about, but it’s also refreshing to see the majestic illusionist draw the audience in with a little bit of close-up magic. He reminds us, with self-deprecating irony, that trust is important to both poetry and magic, and that if this trust is broken, it should be to dazzle, not to harm.

A Fortune for Your Disaster 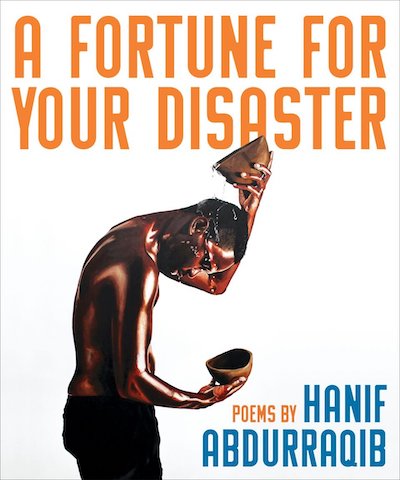