IN FEBRUARY 2019, tensions between Russia and Ukraine hit the headlines once more. This time the subject was Ukraine’s decision to withdraw from the Eurovision Song Contest amid controversy that arose during their process of choosing a national entry for the television competition. During a live transmission on UA:PBC (Ukrainian Public Broadcaster), guised as preparation for press conferences, Ukrainian artists were asked a series of questions, including whether Crimea was a part of Russia or of Ukraine. Unsurprisingly, they all replied that it was the latter.

The winning artist, Maruv, was then asked to sign a participation agreement with a number of clauses, including a ban on her performing in Russia, which the Ukrainian government considers to be an aggressor state. Maruv refused to sign the agreement, which she considered to be tantamount to censorship, and chose to withdraw from the competition. UA:PBC then approached the artists who came in second and third, but both declined the opportunity to perform, in solidarity with Maruv. With time running out ahead of the Eurovision deadline, Ukraine was forced to withdraw.

This debacle makes the important new study A War of Songs: Popular Music and Recent Russia-Ukraine Relations very timely indeed. The volume uses the political protests that began in Kyiv in 2013, and became known internationally as Euromaidan, as its point of departure. Usefully, it offers a general history of these initial protests, interspersed with analyses of both the music that accompanied them and interviews with people on the ground. The opening sections also contextualize both Euromaidan and the music associated with it with reference to the so-called Orange Revolution of 2004–2005 and earlier protests against the then-president of Ukraine, Leonid Kuchma.

Euromaidan initially started in response to President Viktor Yanukovych’s decision not to sign an association agreement with the EU, and eventually led to a revolution that saw the overthrow of the Ukrainian government. It also saw the annexation of Crimea by the Russian government, and a full-scale war in the east of Ukraine. The authors chart this trajectory by dividing Euromaidan into different phases, which are mirrored, in their view, by the musicality emanating from the sites of protest.

The Russian section of the book deals with a number of complex issues, including the Kremlin’s restorative geopolitics under Putin. The early parts deal with the topic of the Russian national anthem, the final version of which was ratified in 2000. One of the great pleasures of the book lies in the authors’ masterful use of anecdotal details, which include the fact that Russian diva Alla Pugacheva, who began her career in 1965 and remains enormously popular, submitted lyrics to a national competition for a freshly written anthem. Her version was not chosen.

In telling the tale of the search for a new national anthem, the authors also touch on other nation-building programs undertaken by the Kremlin in order to engender feelings of belonging among a disenchanted population. The Putin regime’s tools of choice were national symbolism and cultural history — and they still are, though the repertoire of symbols has grown and shifted. The book highlights the problematic nature of this enterprise, particularly in a country like Russia, which has struggled to reconcile its Soviet past with its present.

But for this critic, the most interesting chapter is the one dedicated to an analysis of Russia-Ukraine tensions through the Eurovision Song Contest. The analysis of the winning act from Ukraine in 2004, Ruslana, as well as the Ukrainian entry following the Orange Revolution, GreenJolly, may not tell us anything new musically, but it places the performances in clear political context. Similarly, the analysis of the performance of drag queen Verka Serduchka is an important inclusion, since it highlights the link between parody and protest in the recent conflicts — a link particularly salient in light of the recent election of TV comedian Volodymyr Zelensky to the presidency of Ukraine. The intonation in Serduchka’s song, “Dancing Lasha Tumbai,” was largely received by audiences as “Russia Goodbye,” and therefore seen as a snub to the other nation. While in Ukraine, the character of Verka was seen as parodying Ukrainian women and was therefore deemed not only subversive for its queer undertones, but also downright offensive.

As the analysis here makes clear, the Eurovision Song Contest, which the organizers always strive to present as apolitical, has tended to highlight the various political tensions on the continent. In 2009, for instance, the contest was hosted in Moscow, and the contemporary conflict between Georgia and Russia spilled out onto the stage. Ukraine’s victory in the 2016 Eurovision Song Contest, with a song performed in English and Crimean Tatar, is richly explored in these pages. The juxtaposition between this song, largely seen as a not-so-veiled reference to historical events (it was titled “1944”) and the current annexation of Crimea, and Russia’s flashy dance number performed by superstar Sergey Lazarev, is both original and entertaining, and sets the scene nicely for the discussion of the 2017 contest, which was held in Kyiv.

The 2017 contest was one of the more controversial competitions of recent times, thanks to the decision to ban Russian artist Yulia Samoylova from entering Ukraine after it emerged that she had performed in Crimea after the annexation (illegally, according to Ukrainian law). As someone who worked as a communications manager on the 2017 contest, I can say that the authors’ treatment of the situation is accurate and balanced. It encapsulates some of the complexities that the events threw up, particularly in light of the theme for that year, “Celebrate Diversity.”

Where I believe the Eurovision analysis does fall short is in its scanty commentary on the 2014 competition, which took place just months after Crimea was annexed. Russia’s entry that year, performed by the identical twins the Tolmachevy Sisters, was titled “Shine.” The lyrics of the song are as follows:

Given that the twins were child stars in Russia, having won the Junior Eurovision Song Contest in 2006, and performed at Russian military parades, the song emerges not just as a vague reference to the annexation, but as a blatant flaunting of it on the world stage.

In a game for media attention between Russia and Ukraine, it was Ukraine that came out on top in the PR game though. The Tolmachevy Sisters refused to give interviews at Eurovision that year, perhaps due to poor English language proficiency, while the Ukrainian act Mariya Yaremchuk was only too happy to talk about the annexation to the world’s assembled press. Interestingly, her entry, “Tick Tock,” can essentially be seen as a metaphor for the internal troubles in Ukraine.

The analysis of popular music allows the reader to tap into much deeper issues. One of the important points made in A War of Songs is that, despite political tensions, Russians and Ukrainians continue to listen to each other’s music and, indeed, vote for each other in the Eurovision Song Contest. You cannot identify people with the actions of their governments. As a British citizen, this is something I feel very acutely in 2019.

For those who are knowledgeable about the recent histories of Russia and Ukraine, the narrative surrounding the political climate in both countries in this volume will not present much that is new. However, the musical analysis that accompanies this history is both original and timely. For readers who know next to nothing about these countries and their respective histories, this volume will be a revelation. It represents a unique contribution to the fields of pop culture criticism and political science — and it does so in an era when entertainment and politics are intertwined as never before.

Paul Jordan, otherwise known as “Dr. Eurovision,” has been the BBC’s Eurovision correspondent since 2012. His other areas of academic interest include nation and state building, post-Soviet identity politics and nationalism.

A War of Songs 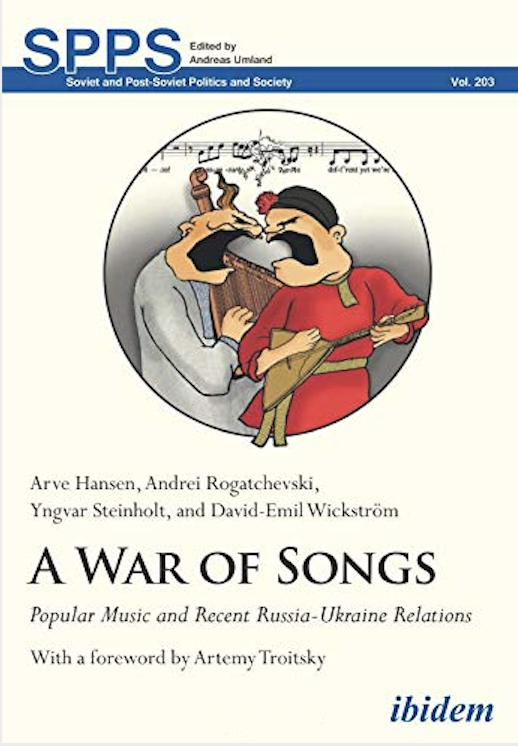