WHEN I THINK of this planet, I think, inevitably, of water: how it makes up most of our planet’s surface. I think of the purity we may associate with water, but also the many ways that water can be transformed, polluted, muddied, made undrinkable by human intervention. Poet Kayleb Rae Candrilli is painfully and tenderly aware of this reality in their latest collection, Water I Won’t Touch, published by Copper Canyon Press. Candrilli’s poems skillfully delve into — amid much else — what it means to be alive on this damaged earth. They precisely interrogate what happens when human interactions poison — or “touch” — something formerly unadulterated.

Reading Candrilli’s collection, I thought about how so many myths — particularly those evoking origination, creation, and transformation — justify humanity’s toll on nature. The collection’s opening phrase, “In the beginning,” from the poem “Sand & Silt,” evokes Genesis, but puts a fresh and tortuous spin on that archaic sentence: “In the beginning, there was a boy / who touched me as he shouldn’t have,” and then:

We all have a story like this,
innocent in its setting, nefarious

how it stays spurred into our bones
as we grow.

This is the moment in Candrilli’s collection that bespeaks destruction; the moment that impurifies the water: the “boy” who “touche[s]” the speaker “as he shouldn’t have”; the first “sin.”

This is not the only formative act of violence in the collection. The father figure in Water I Won’t Touch is an abusive addict: “There is a moment in most people’s days when we remember // both the vastness of the universe and our father’s opioid addiction,” they write in the poem titled “My Partner Wants Me to Write Them a Poem About Drew Barrymore,” and in “On the Abuse of Sleep Aids”:

back when my mother shared

a bed with my father, she took

three Benadryl every night. she said:

i thought he was going to kill me

Elsewhere, in “Some Thoughts on Luck”: “my father has always hated / women, though // he has always needed them.” Yet these critical lines are juxtaposed against, “I have so few fond memories of my father, / but what I have, I hold” in “I Challenge My Father to an Arm-Wrestling Competition and Finally Win.” The poem goes on to name these “few fond memories”: “He read me the entire Kamandi comic series”; “When I was seven years old, // my father and I play-fought with inflatable / circus swords in the sunroom.” The willingness Candrilli has to hold on to these memories, and then to name them, feels akin to something like forgiveness, or at minimum a form of acceptance. Candrilli’s speaker recognizes that their father will never amount to an ideal paternal figure, and yet, despite his evident shortcomings, has provided them with a foundation.

Yet, even in light of this acceptance, Candrilli’s speaker is tempted to “exorcise [their] roots,” as in, “Sestina Written as Though Genesis”: “Yes, I’ve tried to exorcise my roots from the Pennsylvania thicket.” The poem is placed directly in the middle of the collection (and is the only poem in the collection printed horizontally rather than vertically), complicating the notion of “genesis.” “Sestina Written as Though Genesis,” though it does follow the quintessential sestina pattern of taking the words that end each line of the first stanza and incorporating those words into the stanzas that follow, is enumerated into seven sections, one for each stanza and the envoi.

As with much of the collection, “Sestina Written as Though Genesis” calls attention to its division into multiple sections, bringing to mind the spirit of cantos in an epic poem, such as “Transgender Heroic: All This Ridiculous Flesh” (the last poem). Alluding to epics like the Odyssey and Paradise Lost, Candrilli takes us on a new odyssey whose hero is dual and complicated, holding, as does any strong poet, the ability to observe critically and empathetically, to express joy and sorrow. While some lines in Water I Won’t Touch feel timeless, almost biblical, they collide with contemporary references to pop figures and film stars, as in “My Partner Wants Me to Write Them a Poem About Drew Barrymore.” The collection opens with a quote from electronic musicians ODESZA and Zyra: “It’s only water, it’s only fire, it’s only love.” Taken together, these references underscore Candrilli’s acute awareness that life on earth is inherently complicated and transitory. Candrilli writes, “I spend so much time / worrying for the earth and its hurricane / complexion.” Water I Won’t Touch is a portrait of a planet and a family in peril, but also a hero whose journey is redemptive.

Catherine Pond’s new collection, Fieldglass, winner of the Crab Orchard Series in Poetry First Book Award, published by Southern Illinois University Press, opens with the last two lines of Nobel Prize–winning Louise Glück’s poem “Nostos”: “We look at the world once, in childhood. / The rest is memory.” The lines feels like an accurate overarching theme in Pond’s collection, as her poems, like Candrilli’s, provide a nuanced, complicated, and bifurcated view of childhood and its aftermath. That is, Fieldglass, as with Water I Won’t Touch, speaks to moments that are “[l]edged in a memory / of being moored” (“Monhegan”). Here, the memory is not only of being moored but an insistence that memory is a kind of mooring. Both Pond and Candrilli accomplish the crucial poetic task of spinning memory into particular and concise language.

Take, for example, one of the most poignant poems in Fieldglass, “At the Sunoco in West Virginia,” which provides us with a narrative that revolves around the speaker’s feeling “left behind” by her father: “My father is dreamy, forgetful, aloof. But I’ve never actually been left / behind before,” it begins. Toward the close, Pond writes,

It will be months before anyone dies. God forgive me, he whispers
into my child’s ear, and I realize in this scenario, I am the God

to whom he speaks. I could wield my power, but won’t. Mom is across
the country. Dad wears a gold chain around his neck. I reach for it.

What renders the conclusion here so deeply touching is its acute combination of intimacy and withholding: the idea that the speaker “could wield […] power, but won’t,” but as an alternative, reaches for the father’s gold chain. Throughout the collection, the speaker does not shy away from forgiveness, which, in tandem with her critical eye, imbues the poems with a sense of ambition.

Formally, Pond’s poems are varied and diverse, ranging from poems in couplets, tercets, stichics, and sections. “At the Sunoco in West Virginia” in particular successfully uses the couplet to further complicate the relationship between father and daughter. Many poems in the collection hue to this form, as the entire collection explores not only the relationship between father and daughter, but between speaker and lover, and speaker and friend. Fieldglass’s focus is primarily trained on what it means to relate to another person and to deeply love or desire another person. In Fieldglass, we are introduced to a father, a mother, a brother, and to friends and lovers alike. The poem “New York,” another poem in couplets (until the ultimate single line), refers to New York as an “old city” that serves as a locus of desire, a desire that is often dark and melancholic, and too often unfilled. In the poem, Pond writes,

Long ago the doctor promised me a better life.
When I fell in love, she said, Don’t undo the work we’ve done

In “Tatiana,” a persona poem that takes on the voice of Tsar Nicholas II’s youngest daughter, Anastasia, and doomed member of Russia’s last royal family, we are presented with a speaker for whom desire is complicated: “I didn’t know about / sex. I was in love // with my sister.” Often the love and lust written about in Pond’s poetry is complicated — harbored toward friends and, in the case of “Tatiana,” sisters. This occurs in “Riding the Bus Back to Oxford,” which opens: “I wish I was a lesbian, she said. I tried, you know,” and then, “Later, she woke from a nap // to the sound of rain and touched her head gently / to my shoulder. Don’t get sick of me, she said.” The poem’s opening and closing lines reflect the inherent sexual tension and distance between deeply close friendships and the boundary between platonic and romantic attachment.

Both Candrilli and Pond have the capacity to relay and resolve the inherent duality of the critical and empathetic stance. Read in juxtaposition, both Water I Won’t Touch and Fieldglass contain ambitious, heartfelt, lyrical poems that address, in the fullest breadth, the human condition. 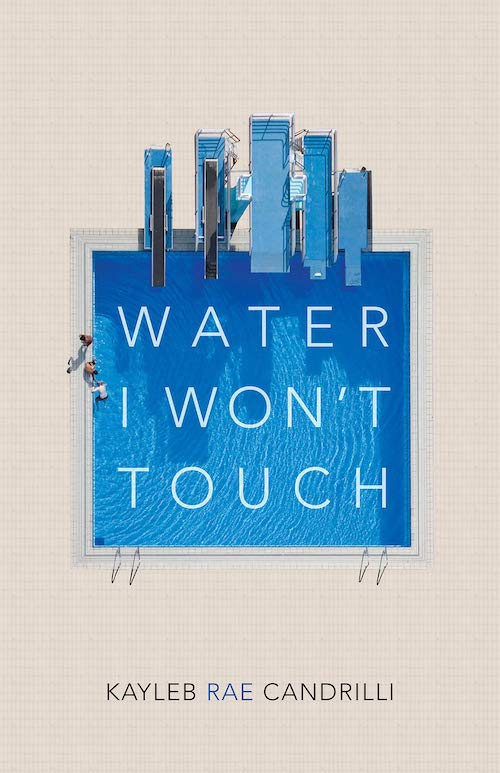 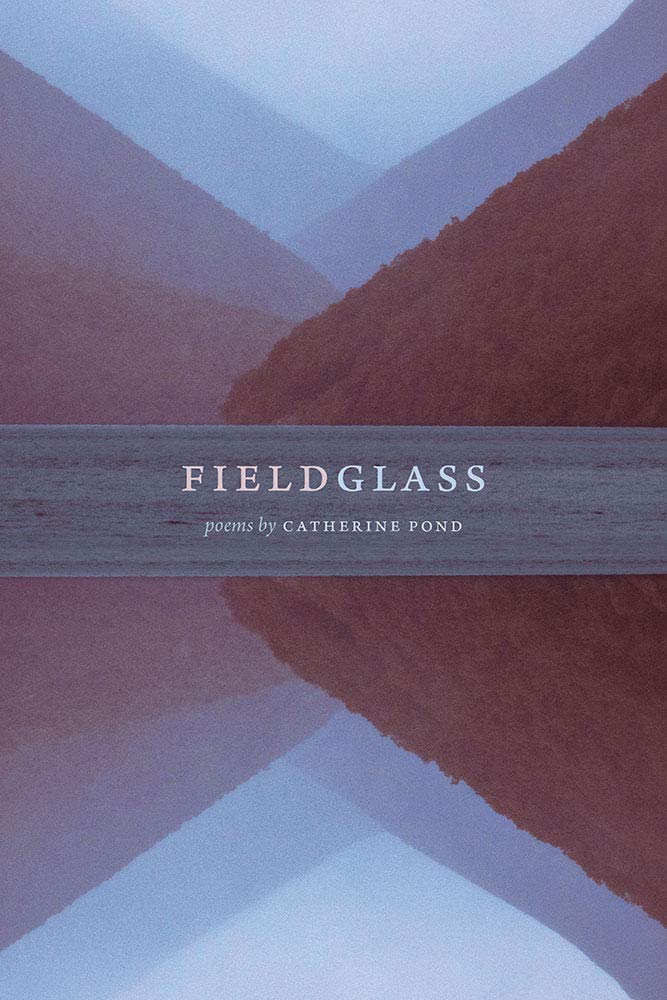