MATTHEW ZAPRUDER WILL SPEAK TO YOU. This isn’t a metaphor, or a mere recommendation: it’s a description of method. In “Come On All You Ghosts,” the title poem of his third and latest volume, Zapruder calls directly to whomever might be taking in his lines at that particular moment: “Reader,” he writes,

thinking of you
and how we will someday
(right now!) be together.

The tone here is characteristic, a blend of matter-of-fact candor and theoretical curiosity.

Zapruder knows all about linguistic mediacy, having earlier described how:

right now thinking
along by means
of an ancient mechanistic

system no one invented
involved super-microscopic
particles that somehow

(weird!) enter through
your eyes or ears…

But Zapruder’s awareness isn’t some all-too-knowing acceptance of textual remove: that “weird!” is both gently ironic and genuinely wonder-struck. This poet wants to communicate rather than presume, as the crucial word “together” in both passages emphasizes. He wants to figure out how writers can still reach readers. And he wants to show why it matters that they do.

The questions are particularly pressing, perhaps, for those writing and reading poetry today. When John Stuart Mill famously defined poetry as overheard rather than heard, he summarized an influential set of romantic assumptions that link lyric imagination and lonely interiority. But more recent critics have questioned those assumptions — in part by pointing out that poets have never been satisfied, in practice, with talking to themselves. In Come On All You Ghosts, Zapruder invokes a variety of second persons: sometimes it’s a particular intimate, as in the winning “Letter to a Lover” or the limpid “Poem for Hannah,” sometimes a recognizable public figure, as in the quietly beautiful “Poem for Ferlinghetti.” Often, as in “Come On All You Ghosts,” it’s a shadowy future reader who is made particular by Zapruder’s friendly “Hello.” Greeting and address help the poet to escape the solitary confinement of consciousness: “I hate the phrase ‘inner life,’” begins the poem “Schwinn,” which later regrets how one can “never know a single thing anyone feels, / just how they say it.” Zapruder’s own “saying,” then, seems as much social as self-reflexive — he even writes a memo to some sociologists, in the poem “You Have Astounding Cosmic News,” that begins, “I have been asked to explain poetry to you.” And when he offers a declaration of intent, it is earnest and humble. “All I know is I have tried / for a long time to be useful,” he writes in “Poem for Ferlinghetti”; “like everyone I am also / always balancing / on the small blade of not / letting other people down.”

But what is the use, exactly, of talking to people through poems? What would it mean not to let them down? An answer lurks, perhaps, in the “dark / before daylight” that comes at the close of “Poem for Ferlinghetti” and that looks ahead to the dim opening of “Come On All You Ghosts.” Here, Zapruder hearkens to a “little cough” and discovers a

on top of its skull
and the ghost
I shyly name Aglow.

Zapruder’s shy call to that spirit echoes both his first address to the reader and the reader’s own mental evocation of the same words: “Are you there Aglow / I said in my mind / reader, exactly the way // you just heard it / in yours about four / poem time units ago.” The “together” of writer and reader in “poem time” hopes for a “together” across other timely divisions — language overcoming the mortal divide between the living and the dead as well as the mental alienation of the poet and his audience.

There are many ghosts, plainly, whom Zapruder would reach, since the poems of Come On are full of loss and shadows; their evocation builds a poem-to-poem rhythm that culminates in the volume’s final lines. That first named ghost in the title poem sends readers back to the second poem in the book, which is titled “Aglow” and begins with another instance of direct, if modest, address: “Hello everyone, hello you. Here we are under this sky. / Where were you Tuesday?” As this poem moves from a random ambulance call to a remembrance of historical atrocity and personal loss, the poet is constantly “talking to you with a voice that pretends to be shy and actually is,” and he concludes with the grieving admission that he is “always in search of the question / that might make you ask me one in return.” Imagined reciprocity mitigates absence without denying its pain. Throughout, Zapruder’s work would build communities of the admittedly mortal as comfort for their inevitable mortality.

The tone of socially-minded elegy links Zapruder to the New York School poet James Schuyler — another writer of pastoral serenity who makes his home in urban confusion. Like Schuyler before him, Zapruder is an everyday poet whose steady attention to the moment feeds on his constant awareness of loss, and whose work has therefore grown richer over the course of his career thus far. And both are social poets whose writing speaks to friends as readers and readers as friends. In “This Handwriting,” for example, Zapruder ends “in California, / happy to be though always / part of me is thinking of my friends / and their shadows, patiently / waiting for my shadow to join them.” With its ordinary, mournful affability, such thinking can even build a kind of polity, though Zapruder (like Schuyler again) is not a poet given to political statement: in the book’s final poem, the poet’s ever-more-insistent “come on” widens and strengthens its reach as he grows more confident about calling on the dead and alive. “Come on all you ghosts,” he writes in a penultimate section,

all you young holding hands
or alone, all you older

people and people of middle
indeterminate age,
we need you, winter is not

This energetic gathering mitigates the chill of death with the warmth of companionship. “I know you can hear me,” the poet insists in his final stanzas, “I know you are here, / I have heard you cough // and sigh when I pretend / I do not believe / I have to say something important.” Zapruder is certainly under no illusions about that importance, and is quick to state that “no one will die / of anything I say,” just as “no one will live // even a second longer.” But if this poem demurs from the ambition of life-and-death consequence, it accepts the responsibility of high-stakes comfort.

This, perhaps, is how poetry can be “useful”; it offers us loss-haunted loners the chance to communicate with those who are gone. The pressed button of Zapruder’s key chain, then, which lights up a skull, seems an apt figure for the poem itself, which he calls — alluding to William Carlos Williams and Paul Valéry — a “machine made of words,” and which he finally cites as his contribution and memorial: he will be content one day to join the ghosts because he has “done my best to leave // behind this machine / anyone with a mind / who cares can enter.” In the words of “Water Street,” perhaps the best poem of Zapruder’s previous book The Pajamaist, these “machines” would each provide a “connector determination system / to keep everyone from hurting”; they would shield human pain with human communion. The basic ambition is as potentially sentimental as it is perennially serious, and Zapruder’s weaker lines can lose their balance on the small blade between the two. But the best poems in his book will not let you down. Their call and questions are worthy of attention and response.

Come on All You Ghosts 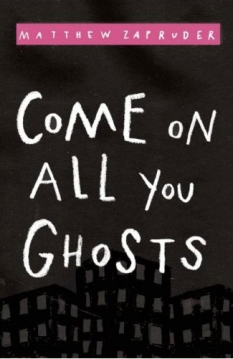