Maxim Shrayer’s collection of poems, Of Politics and Pandemics: Songs of a Russian Immigrant, begins with three epigraphs — by Fernando Pessoa, Ilya Selvinsky, and Carl Sandburg, respectively. Each of them is deeply suggestive. Pessoa, the great Portuguese modernist, developed the idea of heteronyms, fully-fledged literary personae responsible for shares of his work. Actual masks appear in a number of Shrayer’s poems about the pandemic, and the heteronymous “Russian Immigrant” he creates is ideally suited for our bizarre times. The persona parallels his actual self — Shrayer immigrated to the United States with his parents 34 years ago — but also introduces an element of playfulness and ironic distance he requires to comment on the absurdities of our politics and culture. Indeed, Shrayer’s method mirrors Pessoa’s: “I took off the mask and put it back on./ This way is better./ This way I’m the mask.”

The epigraph from Ilya Selvinsky, a classic of the Soviet avantgarde and the subject of Shrayer’s excellent book, I Saw It: Ilya Selvinsky and the Legacy of Bearing Witness to the Shoah, comes from the poet’s cycle Anecdotes about the Karaite Philosopher Babakay-Sudduk and reads, in Shrayer’s inventive translation, “Better to under-, then to over-.” This Chekhovian ideal of saying more through less, as poetry should, is the defining mark of Shrayer’s verse, which packs a whole lot of cultural information and personal reflection into a few succinct lines.

The final epigraph from Sandburg is taken from his “The Long Shadow of Lincoln: A Litany.” Like Sandburg’s, Shrayer’s poems are immersed in the immediate politics of his day, which, however, cast a long historical shadow, revealing unexpected parallels between the Soviet and American experiences. Yet it isn’t just historical experience to which Shrayer hearkens back, it’s also the prosody of an earlier era. His adherence to traditional versification offers a challenge to contemporary American poetic trends and fashions. In this he echoes his beloved Nabokov, but also Joseph Brodsky and Brodsky’s beloved Robert Frost. By and large, Shrayer’s iambs do not detract from, but rather add to his poetic insights.

This dedication to form is part of Shrayer’s poetic map, and the first landmark is again Nabokov. In the opening poem, “Prologue: A Russian Immigrant Meets His Double,” the double wonders if what the speaker is doing is “Another instance/ of trying to outdo Nabokov at his game?” The structure of Of Politics and Pandemics, where the poems are followed by “Notes on the Text,” both tongue-in-cheek and informative, exhibits shades of Nabokov’s Pale Fire, where John Shade’s poem is followed by Kinbote’s extensive commentary. Then there are the Russian poets: “I read my favorite poets: Zabolotsky,/ Akhmatova, Selvinsky, Pasternak …” One could add here the satirist Sasha Cherny and the absurdist Daniil Kharms, as well as the Soviet poet Eduard Bagritsky, the subject of another of Shrayer’s excellent studies, and major figures of the postwar Soviet avantgarde, Genrikh Sapgir and Shrayer’s own father, David Shrayer-Petrov. Shrayer pays homage to and engages in dialogue with them all. “A Russian Immigrant” writing in English because it is “a survival instinct,” since his “audience is here,” both offers his American readers a rich lesson in Russian poetry and reminds them that traditional form does not preclude inventiveness and boldness of opinions.

The poems in the collection range from reflections on the eruption of COVID to “the Trump” and the Democrats’ attempts to unseat him. Shrayer is at his best when finding parallels between Soviet and American realities. A Russian Immigrant’s defense mechanism against excesses on both the right and the left is to “resort to Jewish jesting/ bittersweet”:

But we don’t forget the jokes
of our Soviet childhood:
when political climate chokes
it is better not to brood …

As we chime in the year
of the clever Metal Rat
we refuse to live in fear,
doctor’s order: laughter, stat!

Shrayer’s memories of the Soviet past, and of the Soviet Jewish past in particular, permeate the collection. My favorite poem is “Sentimental Education,” which concerns the Jewish women schoolteachers of literature who taught the speaker — and I should say us — to be who we are:

“Dear children, you must love the classics,”
they preached in voices laced with pain …

We read “Lady with Lapdog” we memorized Shakespeare’s sonnets,
we learned to love and betray one another.
A whole lifetime wouldn’t be enough
to shake the memories of this rancorous theater.

A love for literature is instilled as drab Soviet life passes by the window, while a classmate calls the teacher “the sniveling Jewbitch.” In an admirable response to this antisemitic outburst, the speaker smashes the window. For me, the poem is especially touching since my own grandmother, Maya Anisimovna Moshchinskaya, a teacher of Russian literature for almost 40 years, was one of the purveyors of this “sentimental education.” Roland Barthes talked famously about the effect of photography on the viewer as punctum, “that accident which pricks,” an experience both painful and consoling. Barthes called the photograph “the living image of a dead thing.” Shrayer’s poems, like the one above, have a similar effect. Their “prick” is long lasting and deeply rewarding.

In the final poem, “About the Author,” the mask comes undone and the poet’s credo is revealed:

A Russian Immigrant entertains
with Jewish humor in his veins,
Russian soul-searching in his rimes,
American optimism in bad times.

We can only celebrate the fact that this Russian-Jewish-American triangle, which has long defined Maxim Shrayer as both a scholar and prose writer, is now coming to the reader in verse, making “the world” that “makes no sense” and that has “lost its innocence” a bit more bearable.

Marat Grinberg is professor of Russian and comparative literature at Reed College. 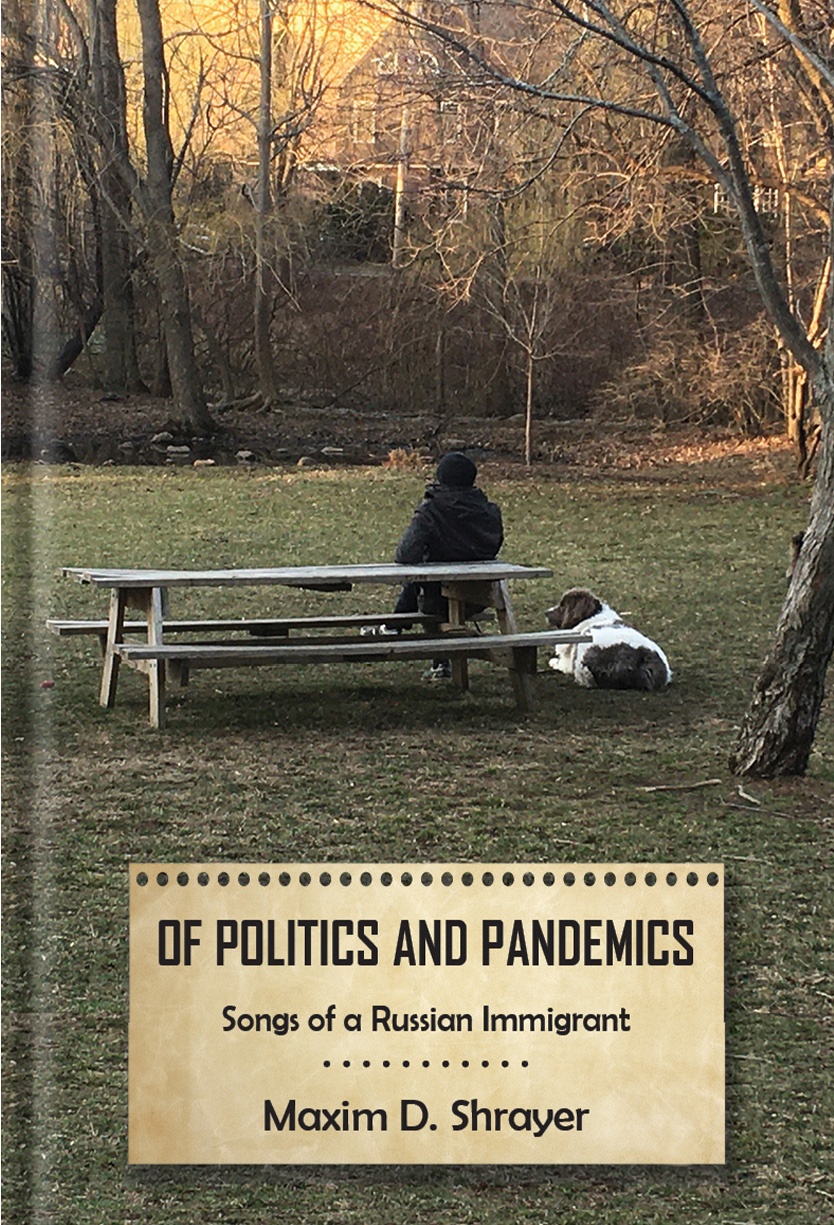