The Afterlife of Christopher Hitchens

On December 15, 2011, Comet Lovejoy plunged through the sun’s corona “coming within only 87,000 miles of the star’s surface.” Everyone had expected it to perish. Scientists who had been following the comet believed it would burn up. Meanwhile, at the same time, in a hospital in Texas, Christopher Hitchens was dying. For months, Hitchens had been public about his stage IV cancer diagnosis, preparing us and himself for this moment, as he liked to remark, “The thing about Stage Four is that there is no such thing as Stage Five.” It didn’t mean we wanted to believe it. But as Hitchens would have been the first to point out, belief and reality don’t always coincide. Still, we hoped for a miracle, of the scientific kind anyway. After all, Hitch had very publicly talked about the experimental cancer treatments he’d been given, which united many of his fans, most of us atheists, by a sort of reality-based faith, or was it just secular denial?

That night, after a friend texted me the news that he died, I bought a pack of cigarettes. I hadn’t smoked in a year. I noted the dark irony of it since this is what had probably contributed to Hitchens’s cancer. I smoked and drank whiskey in his honor. I figured he’d approve even though it wasn’t his brand. I didn’t have Johnnie Walker Black Label, or “Mr. Walker’s amber restorative” as he called it, just a regular bottle of Jameson’s and a pack of American Spirits.  It didn’t matter. I felt like I’d lost a relative, or even more so, a close friend. How was it possible to feel so much affection for a stranger?

Only a few months before, I’d written him a letter, since I’d read somewhere that he liked receiving them:

There are many things I admire about you, Mr. Hitchens: your wit, your belief in human dignity, your willingness to stand apart, your indignation at injustice, your love for both whiskey and irony, not to mention all that atheist stuff (so much so, in fact, that a good night for me is spent at home watching you crush newscasters, religious zealots, and other hypocrites in debates on YouTube). All that said, what I admire most about you is your dedication and love for the written word. I believe, as I suspect you do, that love and dedication to the written word is synonymous with love and dedication to the human being. And by reading you, Mr. Hitchens, I’ve not only been able to learn how to be a better writer, but also how to be a better member of my species. I thank you for this.

That February, I’d gotten to meet Mr. Hitchens, if only briefly. He was in Los Angeles to debate the question “Is there an afterlife?” along with Sam Harris, and two rabbis, David Wolpe and Bradley Shavit Artson. I paid $100 for the VIP tickets to attend a reception with the authors afterwards. With our VIP passes in tow, my ex and I walked over to the reception, held at a place fittingly called The Encore Room. We found ourselves walking right behind the frail Hitchens and his wife, Carol Blue. Along with Hitchens, we were awkwardly the first ones in the place. I had him all to myself for a moment. I could have asked him anything. I could have told him anything. Instead, I froze up and did an embarrassing thing. I asked him for a picture. “If you must,” he said, smiling, but with a hoarse voice. “I don’t know where all these pictures go.” I stood next to Hitchens and my ex went to take a photo with her cell phone, but before she could, a mob of other VIP ticketholders entered the room  and surrounded Hitchens, asking him questions and holding up books for him to sign. He got distracted and turned to these people and the picture was never taken. Probably for the better. Meanwhile I retreated to the back of the room, ate some chocolate covered strawberries from the spread of refreshments they had for the guests, and observed.

Across the room, I saw Sam Harris, talking to one or two people, as Hitchens held mass for a congregation of worshipping fans. I noted the irony. I could have gone over to talk with Harris, but I knew there would be another time for that, I wanted to observe Hitchens, who I knew had only months to live, that this would be the only time I’d ever be so close to the 21st-century’s Oscar Wilde. Imagine, if you could observe Wilde holding court in a small room with his fans?

After about an hour, Hitchens looked tired, though he remained committed to talking to all his fans, when his wife came to rescue him. As he was literally being pulled from the room, he continued to talk and sign people’s books. I managed to slip my worn paperback copy of Letters to a Young Contrarian under his pen and it was the last book he scribbled in before he exited.

The next day, I wrote a poem about it, called “The Famous Atheist” where I satirized myself and other atheists worshipping this man like a god with lines such as,  “I watched a mob of disciples/ rush up to him…” and “the Famous Atheist/ growing tired of their worshiping/ his every gesture/ unintentionally/ threw up his hands/ and they all bowed.”

That being said, I didn’t “worship” Hitchens for his thoughts on atheism. Though I appreciated his willingness and courage to criticize organized religion at a time when liberals were mind-bogglingly opposed to doing so, despite it still being a powerful and often tyrannical institution. I’d been an atheist since I was ten years old. As far as I know, that wasn’t going to change. No, I “worshipped” him for his writing.

Like Wilde, Hitchens was a singular voice. Ten years later, the loss of that voice is even more apparent. A million podcasts, Substacks, daily tweets cannot replace it. There is another irony that one of the last things that happened to Hitchens is that he lost his (literal) voice, which he documents in his Vanity Fair article “Unspoken Truths,” where he reflects on the connection between speech and prose: “The most satisfying compliment a reader can pay is to tell me that he or she feels personally addressed.”

So many times over the last ten years, I have missed that feeling of being personally addressed. So many times I have wondered, what would Hitchens make of these times? What would he say about the pandemic? Or Donald Trump’s presidency? The January 6th attack on the Capitol? The liberal challenges to free speech? It’s not so much his opinions about these things, which in most cases, I feel I can project, but the voice in which he’d say them that I miss most.

On the night of December 15, 2011, the comet Lovejoy did something miraculous. It plunged straight into the sun and despite the scientists’ predictions, reemerged an hour later, almost bright as before, and in a matter of days, its tail had grown back again. And though reality would determine a different fate for Christopher Hitchens, I cannot help but think of him like that comet, defying them all by plunging straight into the hottest surface, and living on.

Clint Margrave is the author of the novel Lying Bastard and the poetry collections, Salute the Wreckage, The Early Death of Men, and Visitor. His work has appeared in The Threepenny Review, Rattle, and The Moth, among others. He lives in Los Angeles, CA. 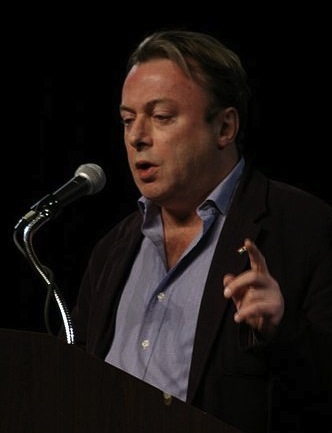 The Afterlife of Christopher Hitchens