News of the Heart: On Natalka Bilotserkivets’s “Eccentric Days of Hope and Sorrow”

On February 17, 2022, I received my English language copy of Eccentric Days of Hope and Sorrow by Ukrainian poet Natalka Bilotserkivets, translated into English by Ali Kinsella and Dzvinia Orlowsky. I had heard and read a handful of the poems and looked forward to sitting down with the book in quiet time. Five days later, the notion of quiet time seemed like an undreamt dream as television screens around the world were filled with scenes of Putin’s attack on Ukraine. I had only just broken open the book’s packaging, and, there on the news, the streets of Kyiv, Kharkiv, and other cities were either jammed with cars of soon-to-be refugees or eerily empty. Now, I have come to this blank screen, where only words will mount, one after the other, as I contemplate the poems in Eccentric Days of Hope and Sorrow, a title more unnervingly apt than any for these days.

Natalka Bilotserkivets published her first poem, “A Word on Your Native Tongue,” in News from Ukraine in 1967, when she was 13, and her first full-length collection only nine years later. Co-translator Ali Kinsella offers an introduction to this volume that helps the reader recognize how the selection reflects the cultural terrain of Ukrainian literature as it moved from fierce Soviet control over artists’ voices, through Perestroika, to independence in 1991. Here we see a voice moderated by a state eventually freed, like the poet’s country. This is not to say that Bilotserkivets’s early work was not authentic; as Kinsella explains, it worked in subterranean ways, sometimes adopting the images and narratives of Ukrainian folk tales to depict a creative life constrained by the Soviet system. She stayed far away from overtly polemical themes.

I do not speak Ukrainian and will not address the accuracy of this translation. That being said, I have fallen hard for these poems — their images, rhythms, leaps. What the English language reader receives is due to the amazing collaboration of a native speaker of English fluent in modern Ukrainian and the sensibilities of an extraordinary Ukrainian-American poet, whose own work is imbued with the colors and voices of her Ukrainian immigrant parents’ lives and memories.

The poems in Eccentric Days move from themes of childhood and maternity set amid rain, forests, fields, mud, sunlight, and shadow. A nursing infant’s eyes resemble storm-clouded skies, while a gangly adolescent’s soul is compared by his mother to “a foal, / ungainly and fearlessly clean” (“A Forgotten Corner”). In “Herbarium” the speaker avers, “There’s nothing better than the scent / of a child’s hair — only a dried violet / smells like that.” The first three sections of Eccentric Days burst with memories of a kind of wilderness within domesticity, the immersive experience of mothering minus the societal framework. In “Herbarium” we discover inscapes that combine the quotidian with the cosmic, hear the wind drill “a whistle tunnel / in the cosmic blue” and travel on to God, who exists

where the thin paper
exposes other paper,
dried cereals, leaves, and flowers,
beauty as memory, as secret doors
a game in smells and lost thoughts.

We learn from Kinsella’s introduction that in Ukraine, in the wake of the Chornobyl disaster, many artists became “oriented toward truth above all” in their approach to their work. However, others, including Bilotserkivets, “retained a sense of ‘art for art’s sake’ prizing aesthetics and perhaps seeking truth in beauty.”

Though the political circumstances were certainly different, I have been reminded, reading these poems, of Anne Sexton’s way of working through folk tales and what was close at hand to express her sense of being suppressed and restrained by social strictures. In particular, I was reminded of her poem “Little Girl, My String Bean, My Lovely Woman,” which was her contribution to a poetry reading protesting the war in Vietnam. While the male voices thundered or blustered, Sexton offered her heart’s invocations. Although Bilotserkivets resists the label of “woman poet,” there is a feminine angle to her vision; as Kinsella points out, “no less than death, the facts of children and childhood are taken as givens” in her work.

There is also a constellatory connection in these poems to the Irish poet Eavan Boland, who raised her voice in praise of the feminine realm in Irish poetry, which until then had been dominated by male perspectives. Like Boland, Bilotserkivets carries an additional fruit of history in her avoska or “just in case bag.” She was born into the Soviet system and witnessed the catastrophe of Chornobyl as a young woman, which was as much a moral catastrophe as a physical one. Dropped into the fledgling democracy of a country whose citizens struggled, in the early years, to find their footing, she cannot help but strike the tense chords of a history of suppression: a long and bloody history of executions, exile, and the ruination of creative lives. She also recognizes the complex emotions of self-exile. “Not Everyone Has Returned” is perhaps her most prescient poem for this moment and what will follow. As we watch Ukrainians crowd railroad stations and clog highways attempting to flee ahead of further violence from the Russian Army, surely they are wondering how long they will be gone. “Not everyone has returned. But not everyone is gone,” Bilotserkivets writes. “Our song is not the same, and all our rebukes have rusted.”

The voice in these poems is distinct, changing as the life of the poet lengthens and deepens. Thanks to the careful attentions of Ali Kinsella and Dzvinia Orlowsky, we get to savor and grow familiar with its resonant, shifting notes. With news of Putin’s invasion of Ukraine ringing in our ears day and night, Natalka Bilotserkivets’ Eccentric Days of Hope and Sorrow brings us closer to what lay before and what lies ahead. 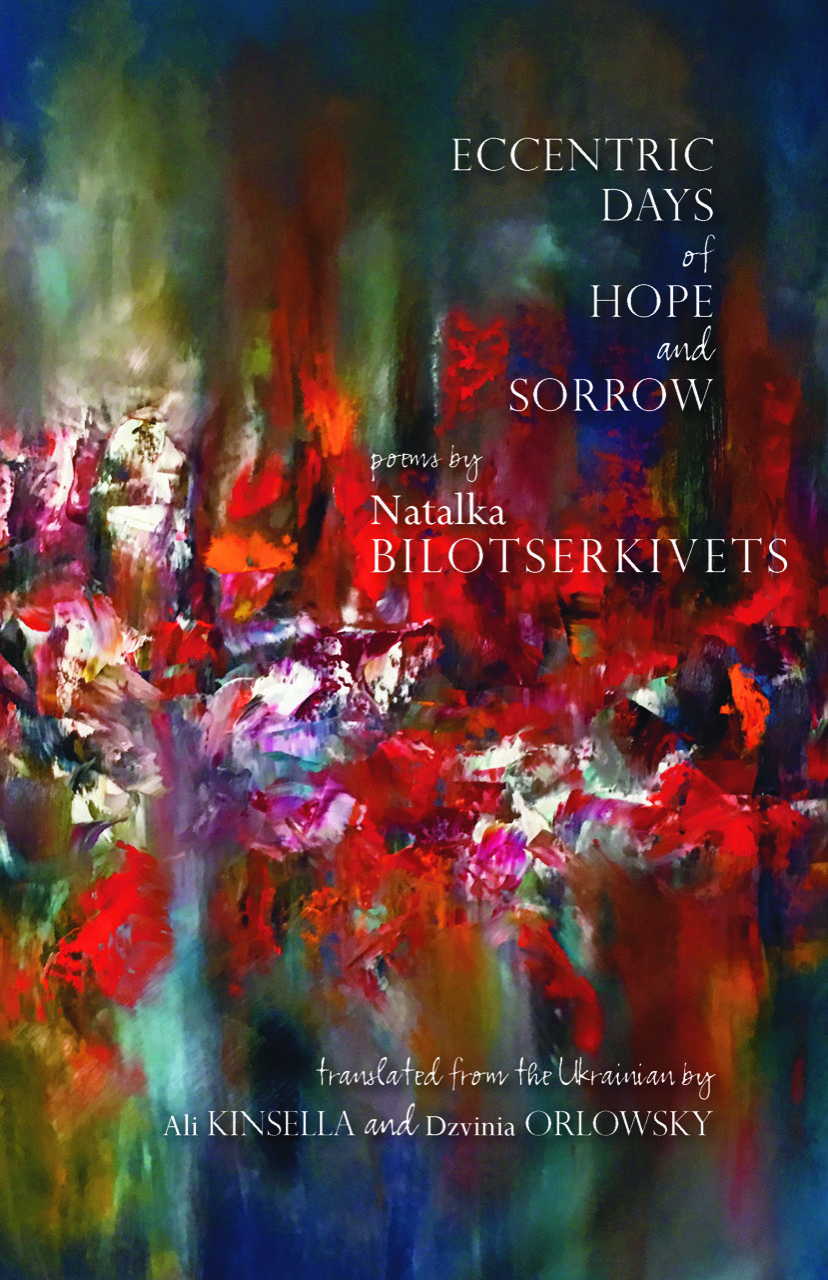 News of the Heart: On Natalka Bilotserkivets’s “Eccentric Days of Hope and Sorrow”