WAR IN UKRAINE » AROUND THE WORLD

“Impossible to Imagine Just a Few Days Ago”: The War from Kharkiv and Uzhhorod

Within a couple of days of Russia’s invasion of Ukraine, I was sent two texts by writers about their experience of those strange, terrifying initial days. I have translated these texts, which speak for themselves, expressing shock, fear, rage, hatred, and love. These are raw responses, some of the first of what will no doubt be many texts about this new, extreme stage of Putin’s eight-year-long war against Ukraine.

Kharkiv: Bombed but Not Defeated

My name is Yulia Ilyukha, I’m a children’s writer from Kharkiv. People who still remember the USSR like to call Kharkiv the “first capital,” because in 1919 the Bolsheviks really did proclaim it the capital of the Ukrainian Soviet Socialist Republic. Only 40 kilometres separate Kharkiv from the Russian border, so it is only natural that the city had close ties — economic links, family links — with the country next door. I say “had,” because it no longer does.

Since February 24, 2022, my city has been under attack from Russian artillery fire. Russian planes are dropping bombs onto the streets of my city. My neighborhood in Kharkiv is called North Saltivka. It is constantly being bombed with Russian missiles: Grad, Uragan, Smerch. A shell landed in the yard next to my building and my son’s nine-year-old classmates have been sitting in a basement for six days. I saw Russian tanks with my own eyes on the ring road around the city. The world should know that the Russians are cynically lying when they say that they are not targeting residential areas — they are firing directly on high-rise apartment blocks and many people have been killed. Parts of the city are in ruins. A Russian plane dropped a bomb directly on to Freedom Square, which they say is the biggest city square in Europe. They were trying to destroy the Kharkiv regional state administration, where Kharkiv’s defence HQ is situated.

This is Putin’s revenge on Kharkiv for failing to capitulate. Kharkiv, which has traditionally been seen as loyal and friendly towards Russia, showed its teeth and raised its hackles: the only flowers these occupiers will be met with are the ones on their coffins. Men stand in line to join the Territorial Defense battalions that protect the city; they are deeply disappointed when they are turned away because of the sheer number of volunteers.

Russian saboteurs enter the city every day; Ukrainian soldiers eliminate them. A curfew is in place. The supermarkets are open for only a few hours every day. There are kilometer-long queues; people can’t get basic food supplies. On February 28, people who came out of their apartments and basements to get some water and food were killed in a Russian artillery strike. A woman with torn-off legs lying next to a store — an image like this was impossible to imagine just a few days ago in peaceful, independent, European Ukraine.

The Russians continue to lie blatantly to their citizens and to the whole world that they are pursuing some sort of mythical liberation mission in Ukraine. The only thing Russia is capable of liberating my Ukraine from is Ukrainians themselves. The Russians are killing my compatriots, but the only thing they’ve achieved is to win the hatred of the population of once-friendly Kharkiv. Kharkiv won’t give up. Kharkiv will survive. Kharkiv is united as never before: it was and will be Ukraine. We will overcome this! Glory to Ukraine! Glory to the Heroes!

I’m in Uzhhorod, the safest city in Ukraine, which is turning into Babylon in front of my eyes. Today is the fourth day of the Russian-Ukrainian war. 40,000 people have poured into a city of 112,000. The weather is beautiful today, sunny, the city is full of new people walking around with their children and their dogs. From the embankment, I go down to the river to take a walk along the bank. I used to do this often before the war. I would admire the flowing water, photograph a sleeping swan or a group of ducks, or examine a heron up close. This is the first time I’ve done it since the war began. On the second day of the war, I realized that I couldn’t remember life before the war, or, rather, I remembered life before the war, but I couldn’t remember what it felt like.

A gorgeous white retriever runs up to me: I immediately spot that this is a new dog. As I stop to stroke him, his owners worry that he might dirty my coat, but I tell them it’s nothing and that I really need the pleasure of stroking him right now. The owners are a man, a woman, a grandmother and three small children. The children scramble down the bank of the river Uzh and are probably surprised that rivers can be so small; it’s very possible they have never seen a river other than the Dnipro. Well, here’s their chance.

These are beautiful people. We get to know each other. They tell me their story, so similar to a million other stories that have taken place in these four days, when Ukrainians have been abandoning their homes so as to avoid death under a Russian air strike. They managed to get out of Kyiv on the second day of the attack.

“It’s like heaven here,” says the woman, “after what we’ve seen.”

I want to bring them a little bit closer to that heaven. I offer them help, but they refuse, they’re living with friends and have everything they need.

For four days now, I’ve been going out of my mind with worry in this heaven for those who are still in hell. My best friend, with her child, husband, and dog, spent two nights in a bomb shelter. Only on the final night did they manage to escape to a safer place outside Kyiv; they stayed with a friend whose husband was at that time in an unsafe place on the other side of Kyiv with his aging parents. Their building had been under intense shelling for several hours. Thirteen-year-old Varvara, my friend’s daughter, is in constant touch with her friends, Kyiv schoolkids, who only recently were discussing anime and falling in love, but now discuss their new normal: during the daytime curfew, while your dad is defending Kyiv in the Territorial Defense, your classmate’s mum sees a suspicious man enter their building. She takes a pistol, leaves her children at home, and goes to check who he is.

The most striking horror of war is the reaction of children. When the war started, eight-year-old Tymko, my friend’s son, said: “This is the worst day of my life.” He, his mum and dad, and their dog managed to get out of their building near Kyiv barely half an hour before the shelling started. When they got to their first destination, he started to cry, because he hadn’t brought the plants he’d been looking after. When they were still at home and heard shots and explosions, his mum comforted him: “Don’t be scared, they’re not interested in us, they’re interested in strategic targets: airports, military bases.” And when they were driving out of the city and heard more shots, Tymko said: “Let’s hope they’re not interested in us.”

Ten-year-old Marfa, my friend’s daughter, cried bitterly for the first hour of the war because she was worried that she wouldn’t be able to defend her rabbit. Then she took a pencil and a piece of paper and wrote on it in big letters “WE DON’T WANT WAR.” She stuck it to the window. Her mother photographed this for me. The photo is really striking — the letters, running back to front, are lit up in the window. A message for the world. A message for a Russian destroyer.

Five-year-old Charlotta is now safe. Her parents took to her to her grandad and grandma in their mountain village. Charlotta has two pigtails, huge blue eyes, and an enchanting smile. Charlotte says that she’s a tiger. That she’ll growl at the Russians, and they’ll run away.

That’s just how it will be.

And you know why? 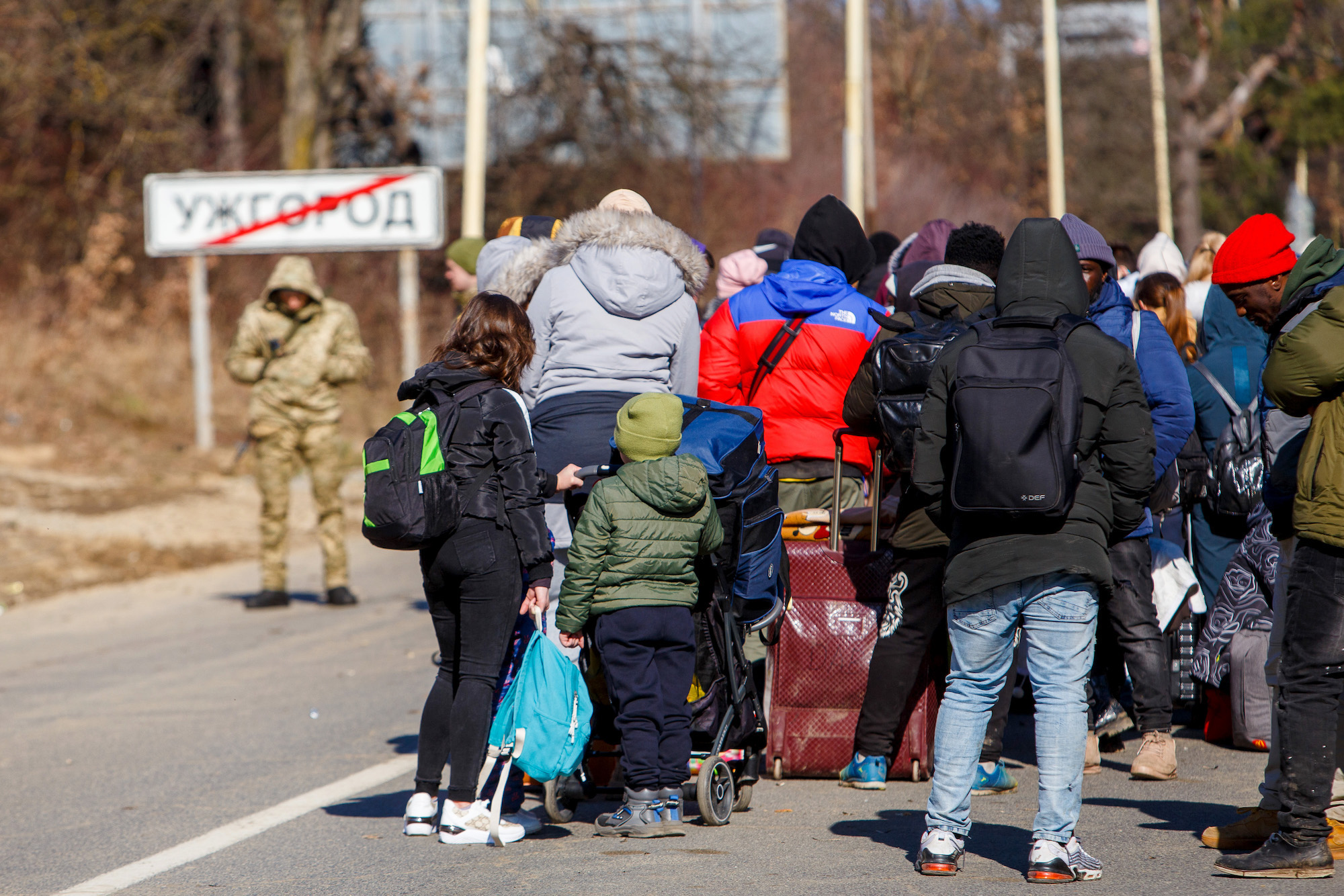 “Impossible to Imagine Just a Few Days Ago”: The War from Kharkiv and Uzhhorod