WAR IN UKRAINE » AROUND THE WORLD

In the early days the thought of taking notes never crossed my mind. Life was still inert, the Internet worked, my son ran around laughing (well, he still does, and it’s only during the explosions that he screams “boo!” and runs to hide to the bathroom). First the explosions came from other cities, but they eventually reached all the way to our building: the enemy is advancing, sausage is left half-cut on the kitchen table while you jump out into the yard with the whole family carrying your “almost emergency” backpacks. Neighbors stand on the porch and watch the airport burn. Capturing the airport is strategically important for the Muscovites. Someone is hastily packing things into the car.

We run to the bomb shelter, picking up friends with their kids along the way. The shelter is an ordinary basement in a Soviet-era five-story apartment building. One of the spaces is taken up by a fabric store. Nothing here is built to accommodate sleeping families. The building next door is equipped with a much better shelter; it’s newer.

Nobody fully understands what is happening. It looks surreal: the suburbs of the capital are under attack? But smoke is billowing from the airport; planes and helicopters are circling the roofs. More explosions, more gunfire follow. People who have somewhere to go, get into their cars with bags and children or walk on foot towards the highway. Soon that will be impossible, unless you are ready to risk your life and break through the combat zone and Russian military columns. Everyone is either running — out of buildings, into buildings — or is standing still in shock. And on the top floor of our five-story apartment building, one man stands alone on his balcony, leaning on the railing, apathetically smoking and watching the fire.

Aside from the airport destroyed all the way on the horizon, the war hasn’t arrived yet in our town. But the atmosphere of war is in the air. In the evening, I go to the supermarket and walk by half-empty shelves. There is no bread: a sullen man walks with a lonely pita in hand to the cash register. A cheerful drunk hoodlum is there, with five gin-and-tonics and a packet of sunflower seeds, speaking to a cashier with excitement: “That’s some fucking something! Fucking something, I tell you. Who expected this? I didn’t expect any of it!”

Our soldiers are already in the streets. At 6 PM, I walk across the park, usually crowded at this time, and not a soul is out. I pass by a kiosk where I always buy cigarettes. Tomorrow a Russian military column will be shelled down here. One of the shells will fall by the kiosk, smashing the metal fence.

We end up spending the night with friends on the other side of town. With our own lives, we test the law that isn’t taught in school: that a person can get used to anything. On the second and third days of the war, we are already used to the explosions and to the sounds of artillery. In an empty courtyard, my son climbs a slide and stomps on the metal with his boots. My immediate thought: gunfire.

War gives a lesson in simple living: listen to the radio (the TV doesn’t work), bake your own bread, curse the looters. On the sixth day of the war, an old man approaches a group of people on the street: “I have wine and champagne here. Anybody want to trade for a pack of sugar?”

A bus passes between the buildings giving out baby food, some other necessities. Some people still have fear in their eyes, that first-day fear. Others have gotten used to it all; they walk their dogs on a newly established schedule. At night, the sky is crimson with flames: Russian military columns are burning. Every single window in every single apartment block is dark. Artillery shells explode around the clock, here and then elsewhere.

Translated from the Belarusian by Valzhyna Mort

The original appeared on Belarusian Radio Liberty in Prague (svaboda.org). 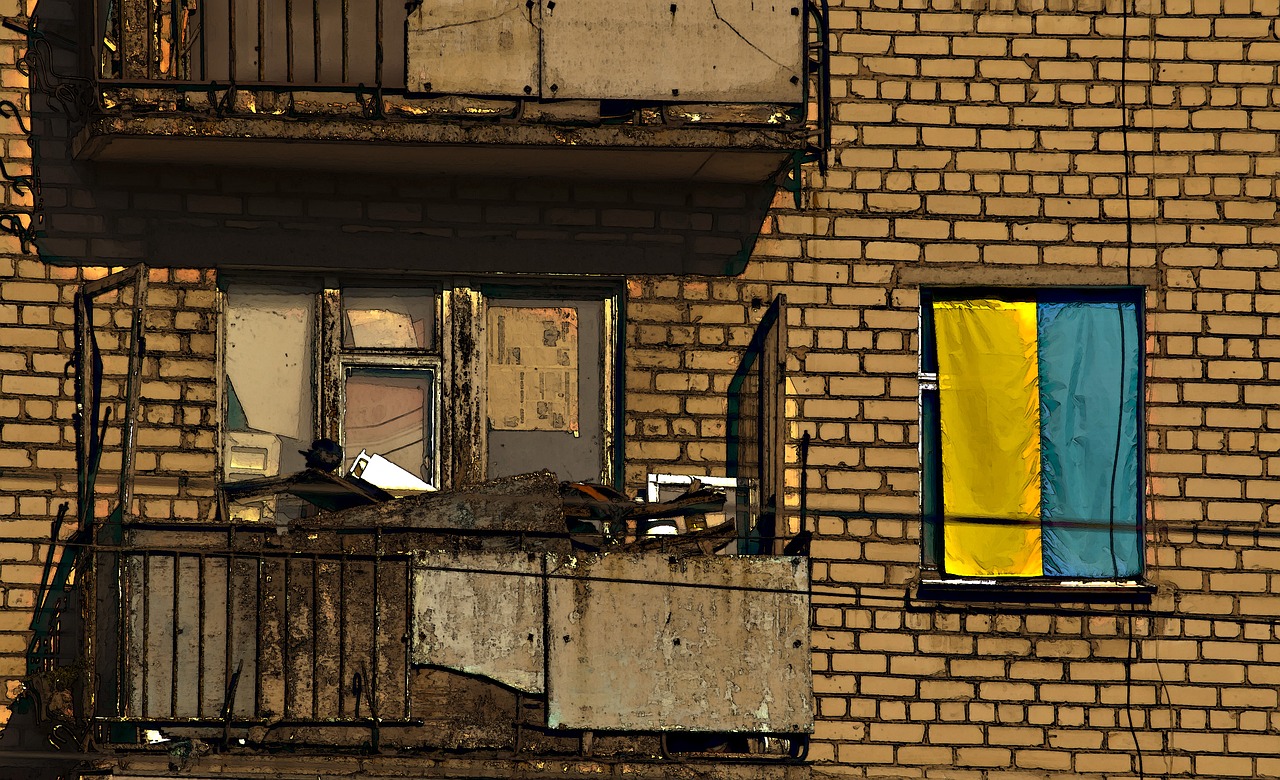