THE FIRST LINES of Peter Gizzi’s newest collection begin with a bird and a window, images so rooted in lyric tradition we can imagine them as two aspects of an eternal poetic source:

A field sparrow
is at my window,
tapping at its reflection,
a tired
antique god
trying to communicate

it’s getting to me

Literary echo abounds, resounds. There is Lesbia’s sparrow, Catullus sings; there is Keats’s open casement. And yet, the window is closed; the sparrow not a pet, but a creature from the field. Even the smallest fact, that the first two lines rhyme and act as a couplet that opens vision rather than bringing it to a close, demonstrates the undergirding crisis that the collection as a whole — with wonder and honesty and difficulty — undertakes. These are poems that ask, What is a poem? They have behind them millennia of lyric history, and still they don’t know. I don’t know either. Origin is an ongoing mystery. That sparrow is a mystery, pecking at its own reflection, “a tired / antique god,” tapping out some code the poet might, or might not, understand. What is deeply felt is what is immediately given: that the daily and the cosmic are interlaced, the moment is a vestige of eternity, and the anonymous sparrow is also the superlative symbol, an old god. Some ancient thing still tries to spell out in us its ancient green vitality, and “it’s getting to me.” I love the twofold speaking in that small phrase — poet both getting the message, and annoyed by the messenger. Maybe that god is reminding the poet that “the medium I work in / is deathless”; maybe the god is reminding the poet that he, the poet, is not.

Among living poets, Peter Gizzi is one of our country’s primary practitioners and theorists of the lyric poem. He is not here to adore or to celebrate; though he can, and does, manage such singing joys. He is not here to dismiss, to mock, to ironize; though he can, and does, counter his innate awe at the fact of the world with an eye that pierces praise through with the plastic arrows of late capital and its consequences. Call this virtue poetic ambivalence. A teetering between ideal beauty and dismal days, knowing that to embrace one without the other is to do work easier than lyric work: “when I said work / and meant lyric.”

It is just that mistake that has been my good guide through these poems, not what is said but what is meant, not work but lyric, the work that lyric is. But what is such “lyric work”? Gizzi writes:

So I thought I would write a poem.
I thought I would try and make art.
But the chemicals seep into everything.
Reader, if I could I would bring back for you
a sun made in crayon.
A sun unformed in the paper sky.
I wonder the paper that made me.
Being human I know that paper makes my mind.

Maybe we learn many things: that the poem isn’t separate from the reality of the world — if the chemicals seep into everything, they seep too into the poem. That lyric work reaches back to our deepest childhood instinct to draw the world in which we live — a yellow sun in the corner of the page, a square house with square windows, triangles for trees — and to offer it to another. Here’s the world, a kind of proof that it exists, and that I exist in it, too; and Reader, so do you. But “a sun made in crayon” isn’t the sun. The gift points at the thing it’s not, and the child grown up into a poet becomes student to the baffling hierarchies of what is made and what is given. The tool seems to make the life that uses the tool: “the paper that made me”; “I know that paper makes my mind.”

The sun appears again and again in Now It’s Dark, just like it does in life. A new day every day, the same hydrogen bomb feeding us light:

I hate hubble photos of the sun,
it looks so fucked up.
I mean, look out man,
the world isn’t stable.

Gizzi is painfully aware that the patterns by which we live our days are anything but stable — “I live in / late light / going darker.” This shaking and trembling is personal,

When my brother could no longer speak
I said Tommy I got this
even if I don’t want this, I’ll sing for you.
When my brother had no voice there was only the couch
and a wooden floor
the ceiling and the TV with nothing blaring.

And this shaking is cosmic,

The dove cries
alpha through
her scales, throws
an indignant vowel,
one might find
hair falling, pitiless
verse, a mind
at rest, flawed
in falling dust

refusing to let self and world, death’s omega and dove’s alpha, day to night and night to day, fall one from the other. Or as Gizzi puts it: “The robin that lives in my yard / also lives in me.” Lyric work lets us know that none of the boundaries hold.

Not the boundaries, no; but lyric work is the work of holding in other ways: holding-on, holding-in, holding-out (offering), holding-with. The mother of the lyric art itself, Sappho, writes again and again of a certain kind of holding as a primary labor and fundamental joy, the making of a garland:

If not, then you I want
to remind …
… what beauty we bore.

Many wreathes of violets,
of roses threaded with crocus,
you made with me and wore,

and many garlands, coiled
around tender necks,
you made, of woven flowers …

Gizzi turns himself to this same work in Now It’s Dark’s second section, “Garland,” made up of one long sequential poem, “Marigold & Cable.” Such garlands are made to adorn what is most loved, the lyric work of delicacy and care. One poem,

is threaded to the next,

Euclid sings to the arc,
black lines blooming,
Saturn, the sudden
evening, nothing to do
with stars, it had no aversion
to the quill-like air
in this whirring vista

Such formal work returns us not only to lyric poetry’s earliest loves and labors, it also creates a pattern entwined with this poetry’s most fervent hopes. Here, in pages where the self is made of the paper on which he writes, in which the sparrow is an “antique god,” and the robin in the yard “also lives in me,” we cannot help but understand the poem is a form of participation in the world far more than it is any record of it. Euclid sings his geometry inside the heart, reminding us of what it’s easy to forget: that the laws by which the sun burns preside over our own fervors, that cosmic geometries govern our motions, that the world we are in is in us. The garland offers a pattern that can compensate for death even if it cannot repair it. It doesn’t, as elegy would do, call from absence the loved one into presence. It isn’t ghost-work or spirit-conjuring. It doesn’t, as apostrophe does, say “O” and wait for invocation to work. No — in material ways, in the handling of the words themselves, it finds a way, over and again, to make an end a beginning; an omega, an alpha; an arrow, a sparrow. The pattern holds and redeems, even if we who make it die away.

Lyric work is weird work, and it must be. We are “made by paper” and on paper we build for ourselves our own corpses. In “Ship of State,” Gizzi writes:

It is a strange thing to know, that what we make will outlive us — will speak for us, will speak as us — long after we’re gone. It is a rare poetry that reminds us of our mortality without sentencing us to death as our inevitable fate. Peter Gizzi’s poems, in their deep human love, do so. The book itself is a mortal thing. I mean this book, Now It’s Dark. It is built of four sections: “Lyric,” “Garland,” “Nocturne,” and “Coda,” each half the length of the previous. The book diminishes as it goes along, and enacts in uncanny ways a silence coming. Sort of like life, I guess. Or maybe not. Maybe it is like a star, gathering in its force to burn again, turning lead to light.

Dan Beachy-Quick is the author of six books of poetry, six chapbooks (two in collaboration with Srikanth Reddy), and two prose collections, as well as criticism and fiction. 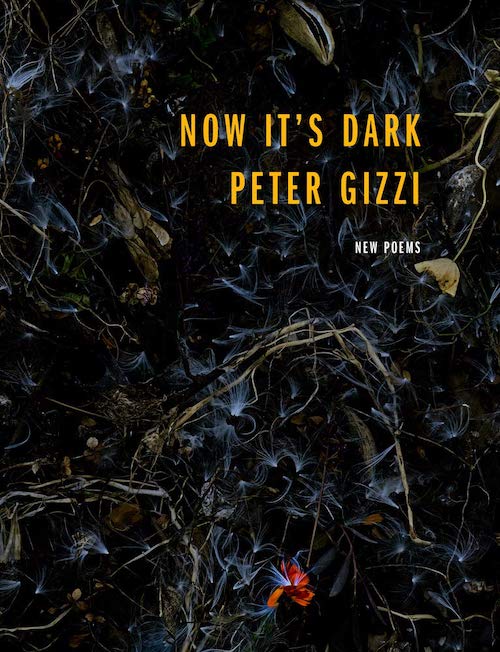