BY NOW, the shortage of medical supplies in the United States is a notorious fact. The nation has between 160,000 and 200,000 ventilators; it may need a million. Masks, gowns, face shields, gloves, bottles of hand sanitizer, and tests for the virus are all in short supply.

The shortage has come as a great surprise, because the government has been contracting with private firms to make these supplies for years, and private firms, as everybody knows, will provide more of any product at a lower price than any central planner ever could. Responding to market signals like greyhounds leaping out of the gates, they race after efficiencies, pushing down costs and boosting productivity.

Yet every day brings fresh evidence of market-based inefficiency. To pick only one example, The New York Times reported on March 29 that a medical supplies company in Costa Mesa, California, which had won a competitive multimillion-dollar contract to make ventilators in 2008, had yet to deliver a single unit. How could a private firm fail so spectacularly to meet the public demand?

A hundred years ago, the economist and satirist Thorstein Veblen was pondering a similar question. In his 1921 book The Engineers and the Price System, he noted that the recent war had demonstrated the tremendous industrial capacity of the advanced nations, yet after the war, unemployment rose and production fell, pushing the industrial world into recession. Machines and men stood idle everywhere, to the great detriment of the public. “[P]eoples are in great need of all sorts of goods and services which these idle plants and idle workmen are fit to produce,” he wrote. “But for reasons of business expediency it is impossible to let these idle plants and idle workmen go to work.”

“Business expediency” meant nothing more than profitability, which Veblen thought was not at all the same thing as productive capacity. In fact, the executive’s job was to reduce the latter in order to ensure the former. “[I]t has become the ordinary duty of the corporate management,” Veblen wrote, “to adjust production to the requirements of the market by restricting the output to what the traffic will bear; that is to say, what will yield the largest net earnings.” Contrary to popular belief, corporate management doesn’t spring forth like a greyhound; it dawdles like a Great Dane.

Veblen had a name for this kind of foot-dragging: sabotage. He pointed out that the word itself derives from the French for “wooden shoe” (sabot), and so it denotes “going slow, with a dragging, clumsy movement, such as that manner of footgear may be expected to bring on.” Because profitability required scaling back production to maximally profitable levels, it followed that economic sabotage “is the beginning of wisdom in all sound workday business enterprise.”

Even if the industrial supply chain is more complicated in our day than it was in Veblen’s, it is still possible to catch the economic saboteurs at work. Returning to the Times story, the original bid-winning company was bought up by another, larger company called Covidien, which begged the federal government for more money, shuffled key employees around the firm (effectively gumming up the gears), and then demanded to be released from the contract. As a result, they received millions of public dollars but provided not a single unit. Veblen would insist that this was not a failure of the free market “price system.” On the contrary, the price system had worked according to its basic laws. As industry observers and government officials explained to the Times, “building a cheaper product […] would undermine Covidiens’ profits from its existing ventilator business.”

Who will save our economy (not to mention countless lives) from these vandals? In order to frighten financiers, “absentee owners” of capital, and other guardians of the status quo, Veblen suggested that they should all be replaced by a “Soviet of technicians.” It was the engineers, he argued, who actually knew how to run the factories.

Without their continued and unremitting supervision and direction the industrial system would cease to be a working system at all; whereas it is not easy to see how the elimination of the existing businesslike control could bring anything but relief and heightened efficiency.

Given the manifest failure of privatizing pandemic preparedness, Veblen’s proposal looks pretty good. Perhaps it is still true, 100 years later, “that there is no single spot or corner in civilized Europe or America where the underlying population would have anything to lose by such an overturn of the established order as would cancel the vested rights of privilege and property.” If so, then it is time for the state to start buying up industries rather than bailing them out and then staffing them with technicians who will run them with an eye to the common good, rather than the interests of shareholders.

But what is the common good, exactly? Veblen’s proposal looks suspiciously like a technocracy, in which a credentialed panel of engineers decides what the public needs. In a pandemic, the public’s needs may be clear enough, but that is seldom the case. The crucial questions — What do we need? Who gets what? Who decides? — have no technical answers. They are open-ended political questions, but Veblen’s proposal lacks a place for deliberative democracy.

This is probably because he put little stock in the wisdom of crowds. Americans believed in the price system too strongly. “This commercialized frame of mind,” Veblen regretted to say, “is a sturdy outgrowth of many generations of consistent training in the pursuit of the main chance; it is second nature, and there need be no fear that it will allow the Americans to see workday facts in any other than its own perspective, just yet.” It would take something really incredible, “harsh and protracted experience to remove it.”

Veblen died in 1929, just a few months before the stock market crashed and the Great Depression began. The Depression was eventually harsh and protracted enough to inspire mass movements in favor of federal involvement in the economy and a new social safety net. In our own day, the government’s response to the pandemic has so far favored capital holders and other members of the “kept classes,” as Veblen liked to call them. It seems safe to conclude, as he did, that “[t]here is nothing in the situation that should reasonably flutter the sensibilities of the Guardians or of that massive body of well-to-do citizens who make up the rank and file of absentee owners, just yet.”

Paul W. Gleason teaches in the religion departments of California Lutheran and Loyola Marymount University. A winner of the National Book Critics “emerging critic” award, he has published reviews and essays in the Washington Post, the Los Angeles Times, The Point, the Guardian, and elsewhere.

Banner image: “g782 sanitizer” by FolstomNatural is licensed under CC BY 2.0. 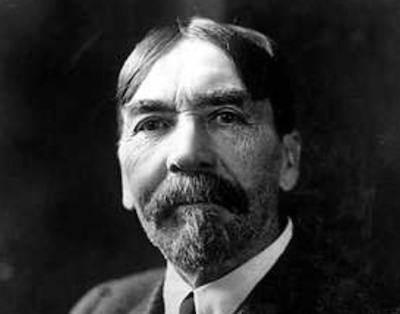