“YOU ARE A SUNFLOWER,” I recently said to my daughter after a trip to a home and garden store where, in our search for flowers to spruce up our small garden, she wanted sunflowers. She smiled at the thought of being compared to the plant. The comment was inspired by a book, The Garden of Happiness, that we had read during our homeschooling adventure, wherein a little girl plants sunflower seeds in her community garden and wills them to life. The community becomes so invested in her project they cheer when the flowers bloom, lament when they die, and paint a mural honoring her efforts. The girl’s flowers were planted in good soil, in a loving community where people wanted to see her thrive. This kind of supportive narrative shouldn’t feel exceptional to me. This should be the standard for all children coming of age in this world. However, Black children aren’t often granted the luxury of good soil. While I have deeply appreciated the meditations on the brutal realities of growing up as a Black boy in the world — something that has informed how I care for and talk to my son about growing up in America — there is an imbalance of public discourse that raises up the precariousness of coming of age as a Black girl. This disparity makes returning to Toni Morrison’s The Bluest Eye, which turns 50 this year, more critical right now than ever.

We are living in a time of tremendous social upheaval and unrest. The onslaught of Black death at the hands of police continues unabated. People are rightly enraged by the senseless murders of Black men, and this preponderance has driven large swaths of people out of their homes during a global pandemic and into the streets for protests. While I am inspired by the rebellion taking place, I remain disheartened by how Black women and girls, who are also victims of state violence, often enter the conversation as afterthoughts. The police who murdered Breonna Taylor during a botched raid, while she was sleeping in bed, have still not been arrested as of the time of this writing. At the same time, Black women such as Oluwatoyin Salau, Dominique Fells, and Riah Milton have recently been killed as a result of gender-based violence. Black women and girls remain perilously situated at the intersections of racial and gender violence and it is imperative that any conversations on anti-racism attend to this undeniable truth.

As people navigate this uniquely challenging time, Toni Morrison’s The Bluest Eye is increasingly appearing on lists of must-reads about racism. The novel remains one of the most forceful critiques of the institutional workings of white supremacy and how it is imbricated in sexism, economic inequality, and colorism. Scholars and critics have returned to this novel to assess its meaning for the 21st century, where even as there is seemingly racial progress, anti-Blackness persists. The novel certainly belongs at the top of any must-read list, but given the ways Black women and girls remain uniquely imperiled and receive limited advocacy when they are harmed, I do wonder if people are overlooking Morrison’s central focus, opting instead for a less complex engagement with the work.

The Bluest Eye tells the story of an 11-year-old Black girl named Pecola Breedlove who desires blue eyes so that she can feel loved and accepted. Pecola’s story is narrated from the lens of her childhood friend Claudia MacTeer, who reflects on Pecola’s brief stay at her home due to domestic instability and the bond she and her sister Frieda shared with Pecola relating to their feelings of devaluation as Black girls coming of age in the 1940s. Pecola endures violence at the hands of a community that rejects her because she possesses qualities that are loathed when viewed through a white supremacist lens — her dark skin, her abject poverty, and her kinky hair. She ultimately descends into madness after losing the child she was carrying, a product of rape at the hands of her own father. Through Pecola’s story, Morrison takes up the effects of intersectional oppression, where if you are a Black girl or woman, racism and sexism converge on your person in devastating ways. Pecola experiences a wholesale rejection both from those within her community and the white members outside of it.

Morrison states in a 2004 interview that her intention in writing the novel was to explore the many levels of oppression Black women and girls experience that weren’t being represented in the literature of the ’60s She wanted to disrupt the rhetoric of racial uplift — “Black is beautiful,” etc. — to highlight how that rhetoric often obscures the struggles of Black women and girls who did not fit a particular standard of beauty. She wanted to write a work that truly explored how “hurtful a certain kind of internecine racism is.” To dramatize this, Morrison trains her eye on the most vulnerable subject situated at the nexus of anti-Black racism and sexism, a Black girl. In exploring Pecola’s woundability, Morrison expresses that she was careful, however, not to “dehumanize the characters who trashed Pecola and contributed to her collapse.” Morrison aimed to tell a dynamic story to which many can relate, which can explain the myriad interpretations of the novel’s significance for both then and now. And while the hallmark of any great novel is that it offers numerous possibilities for meaning-making, it is important not to lose the central animating force of Morrison’s work.

The 1970 publication of The Bluest Eye marked a shift toward the increased representation of Black women writers in the publishing industry, where writers (Alice Walker, Maya Angelou, Nikki Giovanni, Angela Davis, and more) were offering forceful critiques of women’s and Black liberation movements that often overlooked the unique struggles of Black women and girls. In a 1971 essay entitled “What the Black Woman Thinks of Women’s Lib,” Morrison presented her own take on these intra- and intercommunal struggles, which reinforces the critical work that The Bluest Eye performs. From the time of its initial publication to now, the novel reckons with the marginalizing of Black girls and women and advances key ideas central to Black feminist discourse that remain incredibly relevant today.

Most consequentially, The Bluest Eye still speaks to the ongoing need to attend and care for Black women and girls who experience the effects of white supremacy, from its quotidian expressions to its most violent ones in unique and underexamined ways. At the novel’s end, Claudia distills this in her reflection on the tragedy of Pecola’s life, lamenting, “This soil is bad for certain kinds of flowers. Certain seeds it will not nurture, certain fruit it will not bear, and when the land kills of its own volition, we acquiesce and say the victim had no right to live.” American soil has long proven to be unfit for the growth of Black girls, and too often we turn away with indifference each time a budding sprout is ripped up.

Each time we leave Breonna Taylor’s name (and Atatiana Jefferson’s and Sandra Bland’s and more) out of the discussion on police violence, each time we fail to #SayHerName, we are acquiescing to violence. We are validating the idea that Black lives matter, unless those lives belong to women and girls.

When we glorify the image of the Black girl, who is no more than seven years old, marching through the streets declaring, “No justice, no peace,” we acquiesce to that violence once more. Although I am heartened by this dear child and her fierce spirit, I also know that the perpetuation of images like this contributes to stripping Black girls of their innocence. This morphs over time into the “strong Black woman” trope, which becomes a tool of dismissing our vulnerability and pain.

This moment calls for a radical reeducation regarding the need to recognize the insidious workings of anti-Black racism and white supremacy not just in policing and prisons, but in all sectors of public and private life. Toni Morrison’s The Bluest Eye can certainly advance these efforts but only if we focus on the Black girl at its center. In this novel, Morrison is pointedly asking us to care for Black girls and women, to risk our lives for them, and to create hospitable soil for them to grow.

I think about my own daughter as she watches over her sunflowers, trying to keep them alive in what is already becoming sweltering Texas heat. I hope against hope that someone beyond me and her immediate loved ones is out there doing the same for her, and for Black girls everywhere.

Stacie McCormick is an associate professor of English at Texas Christian University. She is the author of the book Staging Black Fugitivity (The Ohio State University Press) and is currently co-editing a special issue on Toni Morrison for the journal College Literature. 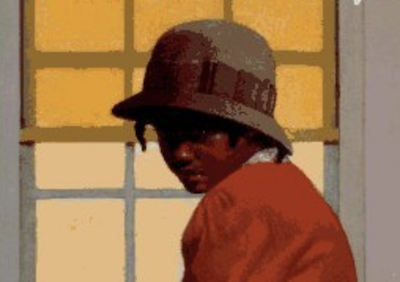 What Flowers Are We Watering? On Black Girls and “The Bluest Eye”’s Enduring Resonance