IN THE J. Peterman catalog, launched in the late 1980s, fragments of whimsical fiction accompany breezy watercolor illustrations of every offering. For instance, “It’s early fall, just after dusk,” begins the description of the Perfect Idea Dress. It continues:

Smells of sugarcane sweep across her in waves as she sits with him on this old swing, homemade sweet tea nearby, sweating in tall ice filled glasses. She’s wearing this crossover cummerbund dress again, with its draping soft cotton that drips off her, just below her tan knees. She’s savoring how little has changed in the last 30 years, here in Nacogdoches, her, him, even the way the swing creaks. […]

The catalog is famous for this sort of grandiloquent copy; sometimes the narratives are even written in second person, inviting you to imagine yourself into scenes of opulence and limitless admiration, as with the Vintage Baja Embroidered Dress: “5:50 p.m. You glide onto the terrace overlooking the lush gardens in a dress of unexpected beauty. In fact, it makes you look like a million dollars. (About what the week will cost.)”

While J. Peterman trades in outlandish fantasies, the fashion compendium Women in Clothes, just out from Penguin, provides a nonfiction counterpart, telling women’s stories through the clothes they actually wear: how they are acquired, and why, and what memories cling to them like stains. Coming in at more than 500 pages, the book is a massively ambitious reaction to a lacuna in the available literature about fashion. Sheila Heti, one of the editors and the author of How Should a Person Be? (2012), writes in the introduction:

For someone who is fascinated by how people relate to one another, it’s hard to overlook personal style as a way we speak to the world. One day I just decided, Today is the day I’m going to figure out how to dress. I biked to a bookstore — one of those very big bookstores — and went to the section where there were fashion and style books, looking for one that would tell me what women thought about as they shopped and dressed. But there was nothing like that. There were books about Audrey Hepburn and books filled with pictures from Vogue, but nothing that felt useful to me at all.

Heti’s description of style as a way that women speak to the world (instead of a result of the way the world speaks to women) is what makes Women in Clothes a vitally important resource. Unlike fashion magazines, which are fueled by advertising revenue, Women in Clothes is driven by the voices of the women who wear them.

Heti, along with Heidi Julavits (The Vanishers, 2012) and Leanne Shapton (Swimming Studies, 2012),put the book together with the help of a survey that asked 639 women questions ranging from “Did you ever buy an item of clothing or jewelry certain that it would be meaningful to you, but it wasn’t at all? What was it, and what happened?” to “What’s the situation with your hair.” The survey responses have been skillfully excerpted and arranged alongside essays, photographs, interviews, poems, and annotated illustrations to create a tapestry of experiences as universal as they are unique.

Add to that, each contributor has a short bio in the back of the book, which amounts to more than 14 pages of tiny, single-spaced text printed margin to margin. The descriptions of their lives are as intriguing and disparate as Anna Wahlström, “a Swedish textile designer and bus driver,” and Blaine Harper, who “works on Alcatraz Island and is an intern for the Multidisciplinary Association for Psychedelic Studies.”

At this point I should mention that I’m quoted (briefly) in Women in Clothes. I filled out a version of the survey after Heti, who spoke via Skype to an undergraduate nonfiction class I was in, encouraged the women in the room to weigh in on the nascent Women in Clothes website. I followed the directions, copying and pasting the questions against the familiar backdrop of my Gmail account, which made it feel more like I was sharing stories with an inquisitive friend than contributing to a stranger’s book. Looking back, my email reads like a memoir in miniature, covering everything from being fitted for my Catholic school uniform in kindergarten, to spiritually outgrowing the clothing I had loved in my early 20s. No wonder I’d felt as if I were writing to a friend — who else would be interested in knowing those things about me? But as I read excerpts from hundreds of surveys in Women in Clothes, my answers felt less confessional, less revealing of me, than they did like a single facet on a part from a cut-crystal chandelier — all our perspectives working together to refract ordinary light into something more enchanting.

Even so, and in spite of our numbers, Women in Clothes is intimate. The book is ostensibly about dressing, but its heartlies under the clothing, in the words of the women themselves. Take the section titled “Ring Cycle” in which full-page photocopies of 15 hands are captioned by quotes about the rings they are wearing. The pictures are grainy, black and white, and sport the telltale horizontal banding of an exhausted toner cartridge. The hands themselves are reproduced only slightly smaller than actual size, lending an eerie immediacy to the experience of reading the stories. I felt a transcendent, physical connection when I laid my right hand over Deborah Auer’s, while reading, on the adjacent page, Aviva Michaelov’s description of her jewelry:

The ring is my wedding band, and it’s the only ring I wear. When I bought it with my husband, he was very nervous about how untraditional it was. It looks somewhat industrial and it’s rose gold. It’s a little loose now because I was five months pregnant when we got it.

The decontextualized capsules of experience that make up much of the book read like the first sentences of 1,000 different short stories. Take “Stains,” for instance, a section comprised of watercolor-painted shapes: the captions, like “Mascara on pillowcase,” or “Blood, urine, hydrogen peroxide on back of coat,” prompt the reader to fill in the blanks, like a Mad-Lib of a life. How each of us completes these stories is a reflection of our own imagination, lending an interactive quality to the text. No two readers will read Women in Clothes the same way.

While much of Women in Clothes is a celebration of style, the editors hint at a more exigent agenda through juxtapositions. Professional-blogger-turned-memoirist-turned-novelist Emily Gould’s essay about the realization that she will never be able to afford designer handbags on a writer’s salary is followed by a series of interviews with Cambodian sweatshop workers. Indeed, the means of production is a persistent theme of the book, and by the time we reach the first-person account of a teenage worker who was trapped for days in the rubble of a collapsed Bangladeshi clothing factory, we can almost feel the blood of her co-workers in the weave of our foreign-made Gap sweaters.

Indeed, one of the strengths of the book is the staggering diversity of the women who participated in the project, although it does seem that some variation of the word “writer” appears more frequently in the bios than other jobs. Even so, Women in Clothes offers as much insight into how women live as how they dress. Some of the relationships explored (such as African-American women to their hair, transgendered women to their given names, and Muslim women to the God-given glory of their bodies) cover a huge amount of sociocultural territory, while sections like “Mothers as Others” — in which contributors submitted pictures of their mothers before they had children and wrote short descriptions of what they saw in the photographs — succinctly examine individual mother-daughter connections.

About halfway through the book, in Heti’s interview with art historian Alexander Nagel, he gives this definition of “style” based on its etymology:

Style is the way we let the world move through us. Think of a surfer. The surfboard is a stylus, cutting a path through the wave. The surfer finds an individual path — no two surfers will find the same path through the swell and curl. And the surfer is nothing without the wave. Without that energy, that force, the surfer can’t carve her path. The same relation exists in the sphere of clothing. Someone with style is irreducible, yet she is always in a powerful relation to her moment.

Women in Clothes deftly investigates the “wave” as well as the “surfer.” Its scope may seem narrow — even shallow — but to read Women in Clothes is to dive deep into hundreds of wardrobes, pushing the clothing aside to explore the worlds within, under, and beyond.

Sasha Wiseman is a student at Bennington College, where she was recently awarded the 2014 MFA Undergraduate Fellowship in Nonfiction. 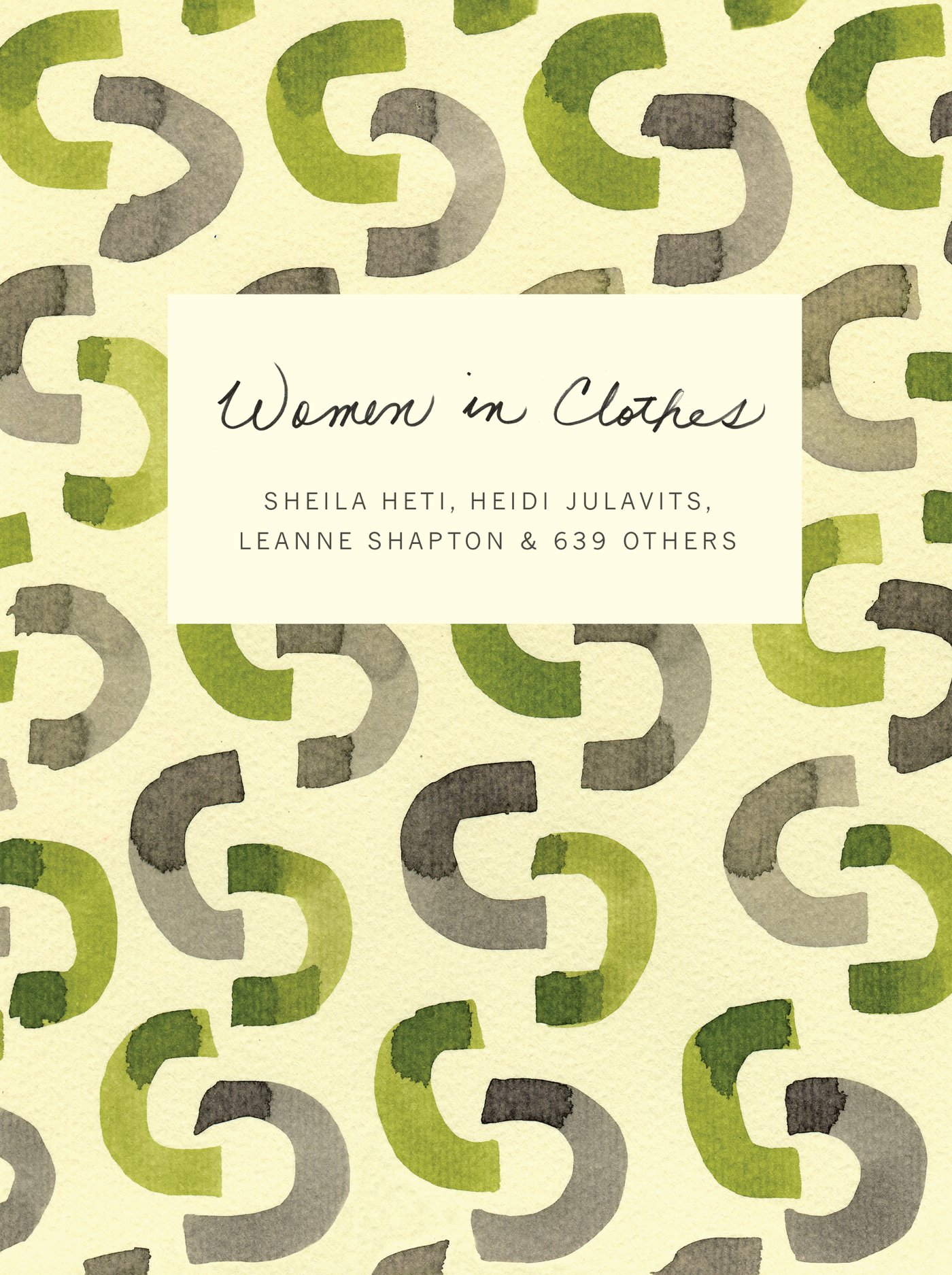