WHEN MARCEL DUCHAMP drew a mustache on the Mona Lisa in pencil, he was refusing to be a passive spectator toward a revered work of art. The character Lynch enacts a similar refusal when, in James Joyce’s A Portrait of the Artist as a Young Man (1916), he tells his friend Stephen Dedalus that he wrote his name in pencil on the backside of the Venus of Praxiteles. Similarly, creators of fan fiction, appropriating and embellishing the creative universes of others, insist on being full collaborators, not just consumers. Though much of their work is of dubious legality and questionable quality, fan fiction nevertheless challenges the power dynamic between creator and consumer. More ambitious aesthetic efforts along these lines — such as Jean Rhys’s feminist reconstruction of Jane Eyre (1847) in Wide Sargasso Sea (1966) or Tom Stoppard’s absurdist Hamlet outtakes in Rosencrantz and Guildenstern Are Dead (1966) — can rise to the level of complex art.

In her new novel Lacuna, South African author Fiona Snyckers — whose previous publications include a thriller, Now Following You (2015), and three young adult novels — envisions alternative scenarios to the most celebrated post-apartheid novel, J. M. Coetzee’s Disgrace (1999). In Coetzee’s story, David Lurie, a white man dismissed from his position at a university in Cape Town because of sexual misconduct, goes to live with his daughter Lucy in the remote farmhouse where she devotes herself to working the land. After three Black men invade their home, beating David and gang-raping his daughter, Lucy opposes her father’s attempts to take action against the assailants, and she willingly bears the child conceived in the assault.

The 24-year-old Lucy Lurie who narrates Snyckers’s Lacuna is convinced that Coetzee has exploited her misfortune to attain fame and fortune and that he has misrepresented what actually occurred. “He turned my rape into a spectacle and me into a public figure,” she contends. Calling herself “a rage-filled harpy,” she is indignant that he has used her ordeal as a facile metaphor for racial politics in South Africa, earning himself a Booker Prize in the process. Lucy is obsessed with confronting Coetzee about his treachery and replacing his story with her own authentic narrative. Told from a male perspective, his novel, she complains, treats sexual assault as a convenient plot device and leaves a gap where she should be. “I am nobody’s lacuna,” she exclaims. Her account — and Snyckers’s novel — set out to fill that lacuna.

Coetzee already anticipated a feminist reconstruction of his novel when he gave Lucy a metafictional moment. “You behave as if everything I do is part of the story of your life,” she tells David. “You are the main character, I am a minor character who doesn’t make an appearance until halfway through.” Moreover, she is not exactly the lacuna that Snyckers’s Lucy claims: she possesses agency, and she exercises it in her stubborn refusal to follow David’s pleas to leave the farm and abort the fetus conceived in violence.

Fiction based on other fiction has an obligation to accept the premises of the earlier work. But details of Lucy’s story in Lacuna differ wildly from Coetzee’s, and not only in small details (in Disgrace, there are three rapists, whereas in Lacuna, there are six; the Lucy of Disgrace bears a child, whereas the Lucy of Lacuna aborts it). Coetzee’s Lucy is a lesbian agrarian collectivist, whereas Snyckers’s Lucy is a hip and horny heterosexual graduate student at an urban university. Nowhere in her account is there any reference to either Melanie Isaacs, whose sexual predation by David ends his academic career, or Bev Shaw, who recruits David for redemptive work in her animal shelter. The narrator of Lacuna has read Disgrace compulsively but selectively, ignoring large swaths of the story that have nothing to do with Lucy.

Most astonishing, though, are the abrupt departures that Lucy’s narrative takes from publicly known facts about Coetzee’s life. She claims that Disgrace is Coetzee’s first and only novel and that, at the time he published it, he was an obscure and insignificant professor at an imaginary South African institution called the University of Constantia. In fact, Disgrace was not his first novel, nor would it be his last. And it was not the first work to earn him the coveted Booker that Lucy finds so irritating. He first won the prize in 1983, 16 years earlier, for Life & Times of Michael K, and he received many other honors including the Commonwealth Writers’ Prize, the Jerusalem Prize, and the Lannan Literary Award, before he was awarded a Nobel Prize in Literature in 2003. By the time he came to write Disgrace, Coetzee was already the widely acclaimed author of Dusklands (1974), In the Heart of the Country (1977), Waiting for the Barbarians (1980), Foe (1986), Age of Iron (1990), and The Master of Petersburg (1994). Lucy attributes to Coetzee egregiously misogynistic statements that a neutral arbiter would find defamatory had he not attained the celebrity status she resents.

Such misrepresentation by a novelist of another novelist’s life and work is, however, a practice that Coetzee himself has indulged in. The Master of Petersburg is a blatant fictionalization of a period in the life of Fyodor Dostoyevsky, the novel’s protagonist. Foe, a kind of fan fiction to Daniel Defoe’s Robinson Crusoe (1719), inserts a female castaway as company on the deserted island. In The Lives of Animals (1999), the contemporary thinkers Peter Singer, Marjorie Garber, Wendy Doniger, and Barbara Smuts provide their actual commentaries on a series of lectures by the fictional animal rights advocate Elizabeth Costello.

And yet, it would be premature to dismiss Lacuna as sloppy literary criticism disguised as sneering fiction. When Lucy, an ABD in English Literature, calls herself “the unreliable witness […] the inherently untruthful complainant,” a reader is left to wonder whether any part of her account should be believed. She recalls several episodes — including a visit with Coetzee at his new home in Adelaide and a riveting trial in which she testifies about the home invasion — only to withdraw them immediately as fabrications. The clinical report produced by Lydia Bascombe, Lucy’s psychotherapist, points to the patient’s “morbid eliding of truth and fiction” and diagnoses her as an example of “the true paranoid delusional personality.” Yet Lucy immediately follows the text of Bascombe’s report with the confession that it is “not real”: “I wrote it.” An elaborate version of the Cretan Paradox, Lacuna teases the reader with the confessions of an admitted prevaricator. It is an exercise in the manifold layers of aporia. Is Lucy accurate about being delusional?

So, it is quite possible that the narrator of Lacuna is not Lucy Lurie at all but rather a traumatized young woman who has seized on parts of Coetzee’s novel to give shape to her rage. More interesting than the novel’s engagement with Disgrace is its examination of the lingering effects of rape. Suffering from PTSD, Lucy seeks out other victims of sexual assault, comparing their ordeals to her own. Generalizing about the complicity of men in the abuse of women, she blames not only the paternal Coetzee but also her own father for acquiescing to her torment.

At the center of Disgrace is the story of how, expelled from his university because of sexual misconduct toward a student, David Lurie approaches redemption through humiliation. In addition to Coetzee’s novel, two other notable literary works from around the same time focus on an academic’s moral degradation. David Mamet’s 1992 play, Oleanna, creates a delicate equilibrium between the actions of a male professor and those of a female student who comes to his office in search of advice. Not the least provocative element in the work is the ambiguity over whether he is a sexual predator abusing his position of authority or she is a cunning coquette attempting to manipulate him into giving her a passing grade. In Philip Roth’s The Human Stain (2000), Coleman Silk loses his tenured position at an elite private college because he inadvertently violates a racial taboo (he naïvely refers to an absent Black student as a “spook”), but his sexual liaison with the college janitor intensifies his disgrace.

Unlike these protagonists, Coetzee’s Lucy Lurie is not an academic. Nevertheless, the narrator of Lacuna claims that her violent ordeal caused her to relinquish her position as a junior lecturer at the University of Constantia. She tells her story with the kind of sardonic urbanity peppered with literary allusions — to Herman Melville and others — that is alien to Coetzee’s earth mother Lucy. Ultimately, the connection to Disgrace is a MacGuffin that Snyckers employs to gain the reader’s attention and then focus it elsewhere. The claim by the narrator of Lacuna that she is Lucy Lurie, abused in and by Coetzee’s novel, is merely the pretext for the creation of a text about the aftershocks of sexual violation. Frantic, rather than fan, fiction, Lacuna ends up being an account — and product — of extreme trauma, experienced by an anxious narrator whose indeterminate ordeal has rendered her delusional.

In the final pages of Lacuna, Lucy attends a scholarly conference in which she tries to make her case against Coetzee. She is challenged by a Black sociologist who notes that, for all her troubles, Lucy enjoys white privilege, something denied most other South Africans. Since Lucy is obviously deeply dissatisfied with Coetzee’s novel, the sociologist issues her a challenge: “So write your own novel.” That is of course what she does, by composing Lacuna. Snyckers’s book becomes a self-begetting text, a reflexive work that recounts its own conception. The novel that Lucy will write — and that the reader has been reading — will, she warns, “be female and angry and incoherent and messy and ugly and raw.” That, at least, is no delusion. 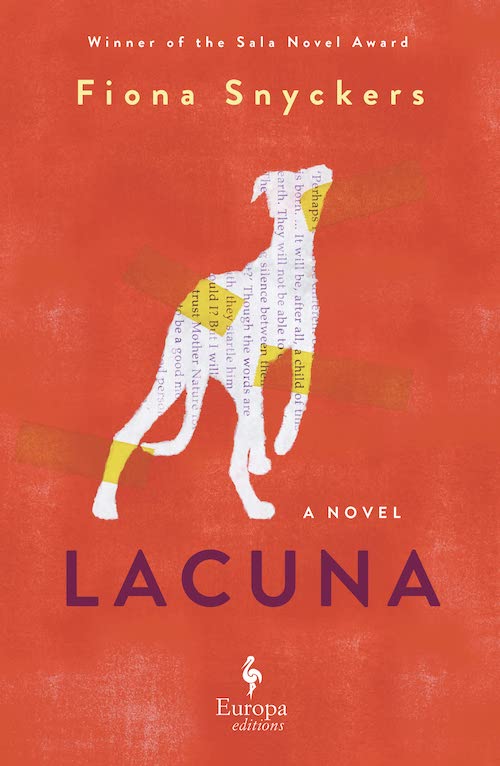