THE NETFLIX ORIGINAL DOCUMENTARY Two Catalonias (dir. Álvaro Longoria and Gerardo Olivares) promises to disentangle the political imbroglio around the referendum for Catalan independence that occurred, amid an international media spectacle, on October 1, 2017. With subtitles in 42 languages, the documentary recognizes that its global viewership will be familiar with the complex Catalan situation through the horrific images of Spanish police brutality that circulated last year. The violent response coincided with then-prime minister Mariano Rajoy’s invocation of Article 155, which dissolved the autonomy of Catalonia and prompted the imprisonment of Catalan politicians. From the outset, Two Catalonias establishes the political scene with wide panning shots over nationalistic demonstrations. Video of people chorusing the Catalan national anthem while waving the estelada flag are then juxtaposed with shaky handheld camera footage of the shocking violence carried out by the central Spanish government’s military police, the Guardia Civil.

Probing the causes of the referendum, Longoria and Olivares present an array of about 85 interviews that span the political spectrum — from Carles Puigdemont, the exiled president of Catalonia, to Inés Arrimadas, the young leader of the center-right opposition party, Ciudadanos. At odds with the binaristic logic of the documentary’s title, the interviews demonstrate that, as Olivares explained to the Spanish newspaper El Diario, “If there are seven million or so Catalans, there will be seven million or so Catalonias, each with their own nuances.” Two Catalonias proposes to explicate the cultural and historical contexts that have produced an entrenched Catalan nationalism, interviewing Quim Torra, the current president of Catalonia, who uses the language of colonization to describe the suppression of the Catalan language and culture under Francoism. However, the documentary seems to trade a thorough engagement with historical specificity for international appeal. As the headline for the El Diario article suggests, Two Catalonias is a documentary for guiris — a colloquial Spanish word for Anglophone tourists — who consumed the Catalan situation through the oversimplification of international media.

Despite the documentary’s efforts at clarification, it is conspicuously silent on one key event of modern Spanish history. Two Catalonias makes no mention of the Spanish Civil War (1936–1939), an elision that is representative of Spain’s historical refusal to contend with the war’s lasting effects in the present. Much like the way in which the United States’s memory of its own civil war has become the battleground for today’s racial strife, prompting Robin Wright to host a conversation with historians worried about another internecine conflict, in Spain, the legacy of the civil war persists as a site of hyperpolarization in public life.

As Giles Tremlett argues in his book Ghosts of Spain: Travels Through Spain and its Silent Past (2006), the acrimonious public dialogue about the civil war began when Emilio Silva led the first exhumation of a mass grave in 2000 to properly bury his grandfather who was executed by Franco’s regime alongside 12 others in 1936. Anthropologists estimate that at least 2,000 mass graves exist across Spain. Silva founded the Association for the Recuperation of Historical Memory to facilitate more exhumations. What had been commonly known as el pacto del olvido (the pact of forgetting), which enabled Spain’s transition to democracy after Franco’s death in 1975, was no longer tenable. The exhumations reopened the wounds of the past, fueling intense debate over the memory of the war. For nearly two decades, scholars have excavated important cultural histories of both the civil war and Francoism. However, revisionist histories still circulate and stymie our comprehension of the historical present.

The memory of the civil war haunts Two Catalonias. The title resonates with the famous phrase from the Spanish poet Antonio Machado — “las dos Españas” (the two Spains) — which he used in a poem from 1917 to describe the left-right binary that politically divided Spain and which has since served as a metaphor for the civil war. The last half of the documentary contains two moments that iconographically index both sides of the war. Returning to video of police brutality, the documentary shows a man writhing in pain, having been clubbed by the Guardia Civil. The large group of people surrounding the injured man loudly chant in Catalan, “¡No passaran!” (They shall not pass!). This slogan of resistance was promulgated throughout Republican Spain, not only via the voices of antifascists but also on propaganda posters that circulated internationally. Later we see a woman in a demonstration of national unity shout, “¡Arriba España!” (Onward Spain!, translated as “Long Live Spain!” in the film’s subtitles), enlivening a Francoist slogan. The presence of these utterances evidences the duration of the civil war — what Professor Jo Labanyi has called its “unfinished business.”

Why exclude the Spanish Civil War from the documentary, then, when its legacy is everywhere present on screen? Describing the success of other Netflix original documentaries like Making a Murderer and Wild Wild Country, company executive and “documentary evangelist” Lisa Nishimura has said: “What you learn is that life is messy and all sides of a story have 100 percent conviction that they are on the right side of reason.” The narrative form of the Netflix documentary thrives on communicating this kind of intractability, such that the viewer sits uncomfortably in the space of not knowing what to believe. The form of Two Catalonias is no exception to this rule, framing the Catalan conflict with a kind of “bothsidesism.” But this logic obscures the historical atrocities of Francoism and its responsibility for the oppression of not only Catalonia but also other regional cultures in Spain. The brutality of the Guardia Civil at polling stations and the demonstrations of national unity should not be interpreted as scenes of two equally virtuous, deadlocked “sides.”

Instead of taking a long historical view on Spanish nationalism and the legacy of Franco, the documentary positions the referendum for Catalan independence as coextensive with the systemic head-scratching that has preoccupied voters in the wake of Brexit, Trump, and other recent manifestations of populism. The case of Catalonia becomes just another event in this predictable genealogy as the aperture of the documentary widens in its final 20 minutes to speculate on the nationalistic inclination that trends across the world. Frans Timmermans, the first vice-president of the European Commission, laments in English, “It’s not a Spanish problem. It’s not even a European problem. It’s a global problem. You see it in all parts of the world.” The documentary’s denouement upholds the propensity to map nationalist movements onto one another. While there are justifiable reasons for such generalization, especially in light of the exclusionary rhetoric of Catalan nationalism, we should not run the risk of overlooking historical specificity, especially not for the sake of Netflix’s documentary brand.

A month after Two Catalonias debuted, El Periódico reported that the Catalan police force, Mossos d’Esquadra, had detained a far-right extremist with elaborate plans to assassinate the new socialist prime minister Pedro Sánchez as retribution for his government’s decision to exhume the remains of General Francisco Franco. The consecrated tomb of the fascist dictator exists within the basilica of El Valle de los Caídos (The Valley of the Fallen), a controversial monument near Madrid that contains the remains of approximately 33,000 people who represent the victims of the Civil War, of political assassinations, and of the oppressive courts of the fascist regime.

Finished in 1959, El Valle signifies the afterlife of a dictatorship that was responsible for the loss of countless lives throughout Spain. The exhumation has been described by Hannah Strange as part of Sánchez’s “historical-memory drive” that seeks to redress the pact of forgetting and pave the way for an ethical recovery of the past. Seconding a solution offered by a committee of anthropologists and historians, Giles Tremlett argues that the monument should be transformed into a Civil War museum that would interrogate its fascist histories. However, others who are sympathetic to the memorialization of Franco view this historical-memory drive as nothing more than a pernicious process that divides the country into pro- and anti-Franco factions. To be clear, the point of exhuming the Civil War, literally and metaphorically, is not to see these two sides with equal validity — to discover that, in Nishimura’s words, “life is messy” — but rather to rectify the historical record.

I visited El Valle last summer and was surprised to hear our guide characterize Franco as a figure who saved Spain from the invasion of communism — an eerie echo of fascist propaganda. The figure of Franco and the bloody oppression of his 36-year dictatorship are lightning rods that electrify deep divisions in Spanish culture. It is alarming that Two Catalonias buries these conversations, but if anything, this elision should remind us of the danger of forgetting the civil wars that shape national identities.

Brandon Truett is a PhD candidate in English at the University of Chicago. 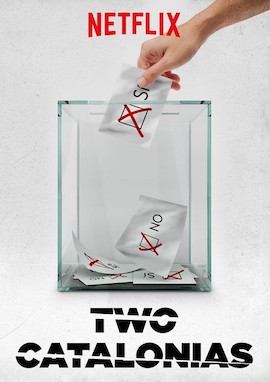