THERE IS A peculiar moment at the beginning of every good novel. It has nothing to do with the story. You read page one, perhaps page two, and then you stop reading. You put the book down and slide it some distance away. This is good, you think. But already your schedule is crowded. Perhaps there is dinner to be made, children to bathe, some task to perform. It doesn’t matter. You know you only have 30 minutes or an hour to spare, and yet you know, after just one or two pages, that this will not be enough. This is one for open time. Not because it’s difficult or obtuse. Simply because it’s good. You already have that feeling of being in the flow and you don’t want the necessity of stopping to become a frustration.

Such is the feeling I had after just two pages of Tom Noyes’s new book, The Substance of Things Hoped For. This is an extraordinary novel, erudite and learned and also wonderfully compelling. I began, then stopped, then began again a day later when I had open hours. Every moment has been a joy.

The Substance of Things Hoped For is the story of John Humphrey Noyes, the author’s distant relative, who becomes what we would today call a cult leader, establishing a community (then several) based on the ideals of Perfectionism and free love. It is also the story of Charles Guiteau, who was briefly a member of John Humphrey Noyes’s community and who, in 1881, shot and killed President James A. Garfield.

The book is not a political history, nor is it an unveiling of the crime. It is about the ways people of earnest but flawed conviction construct their worlds, about how their ideas translate into actions that translate into both trouble and grace. John Humphrey Noyes and Charles Guiteau circle around each other in this story, their gravities affecting one another. And while they don’t collide, every path is altered.

Each chapter is told from the point of view of a particular character, most of them in the first person. We get their voices, their reasons, the truths and deceptions and self-deceptions that motivate responsible and well-meaning people to accept the unacceptable. John Humphrey Noyes, like so many charismatic religious leaders, is deeply read and skillful at bending biblical text to support far-fetched conclusions. For example, regarding the notion of Perfectionism, he says:

As for the doctrine clarified for me in Romans, though, confirming the joyous truth that anyone abiding in Christ was no longer a sinner, I was energized by its life-changing implications. It meant I was perfect. The barrier separating my humanity from my divinity had been destroyed. It also meant, however, that all around me were deluded individuals who considered themselves to be in good standing with God despite their acceptance of their sin.

Later, Noyes uses biblical stories to justify revisions to his own history. “I was initially put in mind of the prophet Elijah,” he says, “who, in fleeing a drought and an angry king, was hidden by God at the Brook Cherith. […] It did not take me long to realize, though, that I was not Elijah but rather Joshua.”

The book, however, is not a staid academic thesis on the outer limits of theological interpretation. We also witness Noyes’s stints in jail, his flight from the law, the fatal capsizing of a sailboat. There is a wonderfully comic scene in prison involving Noyes, a sheriff, and a chamber pot. And throughout the book, the understated mannerisms of the 19th century are consistently entertaining. “This is when Daniel took hold of Mr. Noyes’s coat collar and helped him to his feet in the direction of the door.” There is also a deeply disturbing scene in which Noyes and one of the women from his community visit a group of girls at their dormitory. A nurse recounts the visit: “As a symbol of their commitment to learn to love in the right way, they decided to give up their dolls. They decided to give up their dolls by burning them. Aren’t they brave girls to do that? As a symbol. To show how serious they were. In the stove.”

The Substance of Things Hoped For is told in three parts. Part One covers 1823 through 1859, beginning with Noyes’s youth and an encounter he and his brother had with a rabid fox. Part Two covers 1860 through 1881. The opening of Part Two, in Guiteau’s voice, lets us know his state of mind. He is both troubled and trouble. He is also ominous. “We are coming close to an unveiling,” he says. Part Three, after the Garfield assassination and a classic denouement, covers the years from 1882 until 1886.

The first half of the book is mostly about Noyes, though Guiteau’s world is also present. At the novel’s midpoint, however, the two paths join as Guiteau’s father writes a letter to Noyes that introduces and seeks to explain his son and his motives for traveling to Noyes’s community. For sane and insane reasons, their worlds begin to fall apart. Without ever being pedantic or dull, the characters give voice to genuine and complex ideas that motivate their behavior. On one level, it’s a slippery slope that, among the convinced, leads to a type of madness. Yet the madness has a certain logic and appeal. The power of the reductio ad absurdum makes it all compelling.

Author Noyes has found an effective way to articulate madness. The voices in the book are, every one of them, convincing and masterful. Here is Guiteau, for example, in his full, chilling madness, recounting his decision to shoot President Garfield:

So again I lifted my voice pen-wise to reveal myself to the chosen who was the victor as one chosen must reveal himself to another chosen in order to be established in my rightful place at the chosen who was the victor’s right hand. “To rebuff me indirectly via your lieutenants is still for you to rebuff me, and to rebuff me is to rebuff not only me, but it is also rebuff none other than the Chosen of the Chosen.” […] A re-straightening to be made not by lifting my voice pen-wise but by lifting my voice pistol-wise with a pistol that felt foreign in my hand insofar as I had never held a pistol in my and before the day I held the pistol in my hand and lifted my voice pistol-wise into the dark Potomac in preparation for the day I would hold the pistol in my hand and lift my voice pistol-wise not into the dark Potomac but into the body of the chosen who was the victor, who had shirked his chosenness via rebuffing another chosen indirectly via his lieutenants.

The Substance of Things Hoped For is about exactly what its title says. Multi-voiced and multi-layered, this is a brilliant novel.

W. Scott Olsen is a professor of English at Concordia College in Moorhead, Minnesota. He is the author of 12 books of narrative nonfiction, as well as being a photographer.

The Substance of Things Hoped For 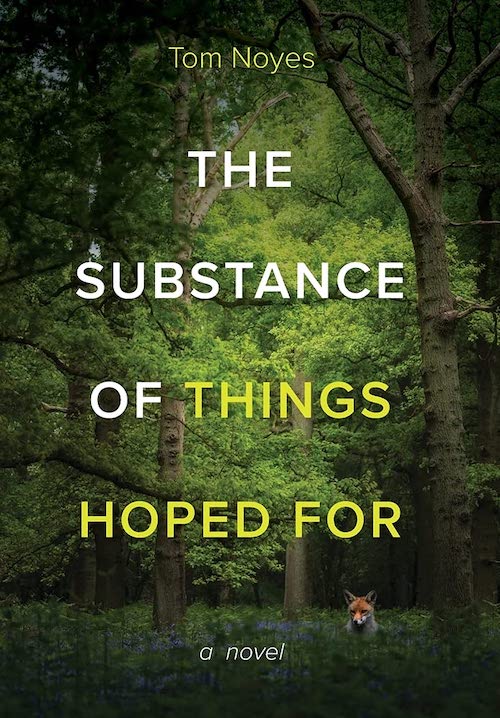