WITH THE PUBLICATION of The Best of World SF: Volume 1 in June, Lavie Tidhar and his contributors have turned a constructive joke into a practical achievement. This handsome volume from Head of Zeus is a major step on a 45-year journey to bring global speculative fiction to Anglophone attention. Although his intent is serious, Tidhar notes in his introduction, that his “use of the term ‘World SF’ is, of course, a joke.” Originally an organization invented in 1976 for the purpose of inviting Soviet writers to the West, the World SF Association became a knowing insider reference that Tidhar is here reclaiming: “I called this book The Best of World SF. […] The future doesn’t belong to London or New York, after all. It belongs to everyone.”

The print edition of The Best of World SF: Volume 1 is truly a thing of beauty, providing gravitas and a wider audience for the authors it collects. It is also, it should be mentioned, available at a reasonable price as an ebook. With stories about refugees, climate, slums, as well as interstellar hermit crabs, redemptive pets, and more, it’s a reminder of how rich the ground is for speculative fiction, no matter where it’s written. And with contributors writing about regions from New Biafra to Sweden, Burkina Faso to the Amazon and with writers from Japan, Singapore, China and Vietnam, Volume 1 certainly represents a wide swath of the world.

The sad 2018 death of Gardner Dozois, the doyen of science fiction anthologizers, meant that there was an opportunity for new anthologies and new anthologizers to hit the mainstream. Dozois had been an enthusiastic and energetic advocate for different genres of speculative fiction for decades, responsible for dozens of anthologies and 35 annual volumes of The Year’s Best Science Fiction. Although, certainly by its final volume in 2018, that series had moved away from the stereotype it began with, of including only “white, male, and American” authors, it was certainly not explicitly representative of the breadth of styles, concerns, and innovations in SF found around the world.

The successful diversification of SF outlets from a select few print publications in America (including Asimov’s Science Fiction magazine, which Dozois edited from the mid-’80s to 2004) to a variety of online publications across the world — both genre and general interest — has brought new voices, new outlooks, and new styles to the genre. Tidhar was instrumental in this shift, publishing the World SF Blog — with colleagues — for four years from 2009 with “a desire to highlight and promote voices seldom heard in genre fiction.” For its contribution to the field, the blog was a nominee for the 2011 World Fantasy Award, and won a 2012 BSFA Award for Best Non-Fiction.

Tidhar, a respected author in his own right, has collected world science fiction before, in four volumes of The Apex Book of World SF between 2009 and 2015. Those high-quality anthologies for Apex — a smaller imprint based in Kentucky — worked as proof of concept. This precedent, along with the sheer volume of excellent SF writing around the world made the case for this anthology. In fact, it explains why Tidhar has had to choose to narrow his criteria. He describes this choice in his introduction: “If my approach before was to include all flavour of speculative fiction, including fantasy and horror, I have tried to narrow The Best of World SF more to the science fiction side.”

Tidhar’s fiction is not represented in the collection except through his translation of Israeli writer Nir Yaniv’s story, “Benjamin Schneider’s Little Greys.” Yaniv’s story is one of the odder, quieter pieces that doesn’t require any geopolitical context for its account of a “hypochondriac” whose strange illnesses take an odd turn — especially for the doctor who tells the story. Other stories, like the two opening tales, “Immersion” and “Debtless,” are intriguing explorations of cultural colonialism and corporate bondage respectively.

There are many striking stories in the collection, but Tidhar chooses to open with two of the strongest. They are thematically linked by their deployment of futuristic technology to take faults in our contemporary world to a new level. In the opening story, “Immersion,” French author Aliette de Bodard “draws on her Vietnamese heritage” to imagine a world in which augmented reality devices seem to be softly augmenting a colonial worldview.

Tidhar introduces each story but is careful not to pre-empt. Usually, he explains his relationship with the author or — as with de Bodard — what they bring to the story. Introducing Chen Qiufan, he informs us that the young Chinese writer is known as “Stanley”! By any authorial name, Stanley’s story “Immersion” about indebted miners on a remote asteroid is trenchant. In the context of futuristic corporate exploitation, he explores the relationship between individuals, groups, and the nature of debt. David Graeber’s seminal book Debt was subtitled “The First 5,000 Years”; Chen gives us a glimpse into the second 5,000.

It’s not only “Immersion” that considers this topic. “The Green” also uses the premise of corporate exploitation to explore the vicissitudes of class, capitalism, and the warping effect of debt upon relationships. Lauren Beukes’s story about bio-sampling on a fecund world of potentially pathological organisms, however, provides a significantly less saccharine ending than “Immersion.”

The stories in the collection run the gamut of genre, from the exciting mini-epic “The Sun From Both Sides” by R. S. A. Garcia from Trinidad where a husband and wife team have to come out of retirement to save each other and his homeworld, to the sui generis and entirely plot-free “An Incomplete Guide to Understanding the Rose Petal Infestation Associated With EverTyphoid Patients in the Tropicool IcyLand Urban Indian Slum” by the Indian writer Kuzhali Manickavel.

The press release proudly touts the 21 countries and five different continents from which the 26 stories hail. But the geographical diversity is a mere gesture to the creativity on display here. “The Green Ship” — a story in the collection from award-winning Italian author Francesco Verso — functions as a sly metonymy for the collection as a whole.

In “The Green Ship,” refugees desperately searching for safety in the open sea are found by an enormous vessel. A floating haven that gives the story its name, the green ship has both legal and technological solutions to their forced displacement. It is such an “immense structure” that it encloses actual habitats and climates and is so big that, according to “international law, it’s not a ship, but a micro-nation.”

Billai, the constant focus of our protagonist, is rescued along with 132 others at the story’s outset. She revels in the floating haven that she’s reached:

“Do you know why I like it here?” She asked as she lay down.

I shook my head.

“Because we’re all immigrants from somewhere.”

“If you think about it, Dadaab was also like that.”

“But it’s prettier here,” she said, her smile showing disappointment.

Her eagerness and the skills evinced by the other refugees are clear, but their initial hopelessness is also evident. The ship barely weathers a tsunami but is near enough to the underwater volcanic explosion that it can claim the newly emerged magma islet. They march on to the islet with a 3D printed soccer ball.

World SF writers were, by and large, cast adrift by Anglophone science fiction until the turn of the millennium. The World SF Blog was not the only welcoming “micro-nation” for these global wanderers, and it certainly was an “immense structure” that provided them with a welcoming haven. And, just like the characters at the end of “The Green Ship” find themselves with a new, solid setting, this anthology is just the start of a whole new game for speculative fiction authors around the world.

Dan Friedman is a writer and digital consultant working with organizations including HIAS and the Center for Countering Digital Hate. Subscribe to his Voice of Reason.

The Best of World SF: Volume 1 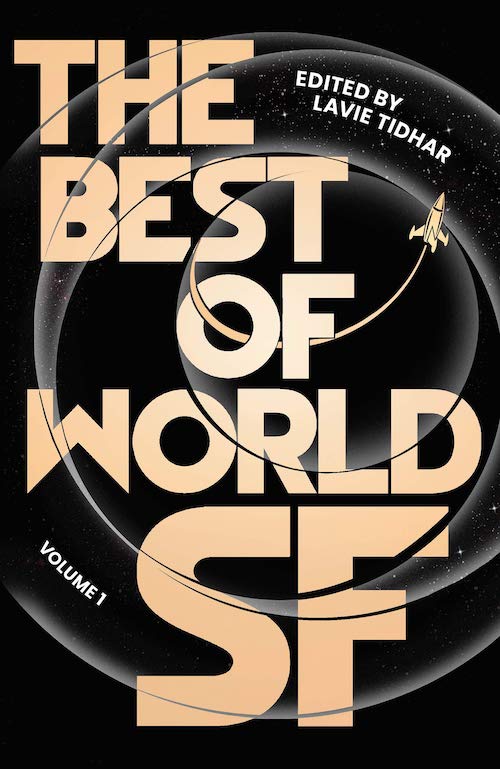