AS THE TITLE Fighting God suggests, David Silverman has produced a book chronicling the soon-to-come triumph of atheism, a book that is every bit as brash and combative as he has proved himself to be in on-air confrontations with the likes of Fox News talk show hosts Bill O’Reilly and Sean Hannity. In contrast to previous tomes in the New Atheist canon (Sam Harris’s The End of Faith, Richard Dawkins’s The God Delusion, and the late Christopher Hitchens’s God Is not Great), Silverman spends little time explaining, or explaining away, religion. Fighting God is, rather, in a real sense, not a polemic crafted to turn the faithful into nonbelievers, but a secular activist’s manual — much needed for those wishing to defeat their doubts about the advisability of coming out atheist, shore up their nontheistic views with data, and convince others to speak openly about their nonbelief. Silverman, in other words, is promoting “firebrand atheism,” and he effectively uses statistics and graphs to make his points — something hitherto not seen in New Atheist polemics.

President of the activist organization American Atheists, Silverman, in his own words, has been “a walking, talking atheist billboard for nearly 20 years.” He has reason to be brash: the statistical data, as he demonstrates, leave no doubt about what the trends in the “God-or-no-God” debate are. The Pew Research Center polls he cites tell us that the religiously unaffiliated, the “Nones,” are rising inexorably, led by the young; by 2025, the demographic stats say, nonbelievers will make up almost 31 percent of the population. But if we also take into account the rate at which faith is losing its grip on the young, that 31 percent will become 63 percent in the same time frame. In short, religion, at least in the United States, is dying out with its (aging) adherents, pretty much as it has in northern Europe. “The Lie of God,” Silverman writes, “which apparently started with the Neanderthals, is nearing its end, and good riddance.”

Silverman presents this data toward the end of his book. Straightaway, however, we understand he is addressing atheists and agnostics — better said, atheists who shy away from controversy by proclaiming themselves agnostic. We get the point and the attitude in the foreword, when Cara Santa Maria, host of the “Talk Nerdy” podcast, succinctly terms religion “a bunch of bullshit.” (Silverman will maintain a similarly colloquial tone throughout the text.) Why all the chutzpah? Because, he says, in the fight against faith, “we’re winning.” Winners do not need to hedge or apologize. Yes, he’s preaching to the choir, but it has been a singularly timid choir, and he is writing to embolden it.

Speaking to us from what he views as a victor’s standpoint, Silverman claims for his cause politicians like Bill Clinton and former South Carolina Governor Mark Sanford who are known for their faith, but whose alleged track record in spousal fidelity belies their stated belief in God, at least if we assess their behavior in light of the hellfire to which it should destine them. Silverman goes further, explaining that a good many more atheists don’t necessarily recognize themselves by that designation. He pronounces atheist anyone who holds that “‘god is love’ or ‘god is the universe.’” For a person to truly qualify as a believer, she would have to believe in a “literal god,” he points out. Silverman follows up with 10 bullet points that would seem to render de facto godless vast ranks of the faithful. As he has it, no one who says we cannot establish whether there is a god, or who simply accepts certain precepts ascribed to religion (Love thy neighbor) or who just happens to enjoy religious rituals is a believer per se. Agnosticism, to him, is particularly irrational. After all, “nobody would say they were only ‘pretty sure’ The Matrix was fiction, but they couldn’t commit to saying it for sure ‘because no one knows everything in the universe.’”

The confusion, Silverman shows us, stems from a mix of cowardice, ignorance, and even semantics — understandable since even dictionary entries for “atheist” differ. (Merriam-Webster gets it wrong, but not the Oxford English Dictionary.) “Skeptics are atheists, at least the good ones” — here he adduces an explanatory graph — “because skepticism applied to religion invariably yields atheism.” The real problem is that so many nonbelievers simply prefer using any word but “atheist” to describe themselves, including agnostic, secular, humanist, and freethinker. He provides data showing fewer than 30 percent of Americans even know what “secular” means, with only just above 40 percent understanding “agnostic.”

Silverman justly asks, “Where is the teaching in using these euphemisms? How do they help closeted nonbelievers? If you are asked about your religion and you answer with a term that, while technically correct, has a very high likelihood of being misunderstood, how is that telling the truth? How is that even honest?” Silverman says his mission is the truth and that he is trying to get his readers to come clean and declare what they already know: there is no god. Because that’s the truth.

Silverman presents stats showing an uptick in atheism following American Atheists’ ad campaigns. At times throughout the book, he veers into self-promotion (or to promoting American Atheists), but I found it hard to fault him for this. A shier, more retiring atheist would not have done as well as he has against the likes of O’Reilly and Hannity, who address just the people most in need of the secular message now.

Probably the most contentious point in Fighting God comes, though, in the section “On Jewish Atheism.” He accepts the explanation given him by Penn Jillette (who, Silverman tells us, “has long called Jewish atheism bullshit”) that “any genetic bonds Jews have with each other are actually only ties to specific regions of descent, not a commonality called being Jewish.” Silverman dismantles the notion of matrilineal descent, since it excludes fathers, “which invalidates any claim to a race […] Matrilineal descent implies racial purity despite the reality of dilution.” Silverman takes us through his personal journey to this conclusion though anecdotes about Passover as conducted in his family. “Jewish food and dance,” he contends, “[…] are all based on national or local traditions that have nothing to do with religion. They don’t make bagels ‘Jewish’ any more than falafel is Muslim or chow mein is Buddhist.”

He reached this conclusion while examining a display in a science museum featuring contributions to science made by Muslims in Islam’s Medieval Golden Era. He studied the exhibits and thought, “here’s a person, this person invented a thing, this person was a Muslim, and therefore Islam gave the world this invented thing,” when in fact the doctrines of Islam had nothing to do with discoveries that happened to be made by Muslims. (So much for “Islamic science,” we understand.) Silverman became “bitter at Islam for taking credit for the accomplishments of its adherents,” and “realized it is similar to Jews proudly crowing about all the Jewish Nobel Prize winners.”

The gist of Silverman’s denial of Jewishness: Ashkenazim, Sephardim, and Ethiopian Jews are Jews “because they all have the Torah in common — until they drop the Torah and become atheists (who happen to be children of Jews).” He closes this chapter as he does others, asking for frankness: “If you’re an atheist and still call yourself a Jew, please reconsider what’s important — and what’s true.”

Some readers might wonder, does it matter? If one calls oneself Jewish, or Christian or whatever, what’s the harm in that? If belief were truly a personal matter, not much. But with evangelicals still accounting for a quarter of all Americans, and generally voting as a bloc, the electoral implications of the rise of the Nones are clear. Faith skews political discourse to the right. Rousing nonbelievers to come clean about their views and cast ballots accordingly would change the political landscape in the United States, and help settle controversial issues such as women’s reproductive rights, right-to-die legislation, and, of course, the teaching of evolution by natural selection in schools.

Those are all battles progressives need to fight and win. Silverman’s Fighting God will provide much needed succor to the hitherto too-timid secularist rank and file.

Jeffrey Tayler is a contributing editor for The Atlantic and the author of six travel books, including Facing the Congo. 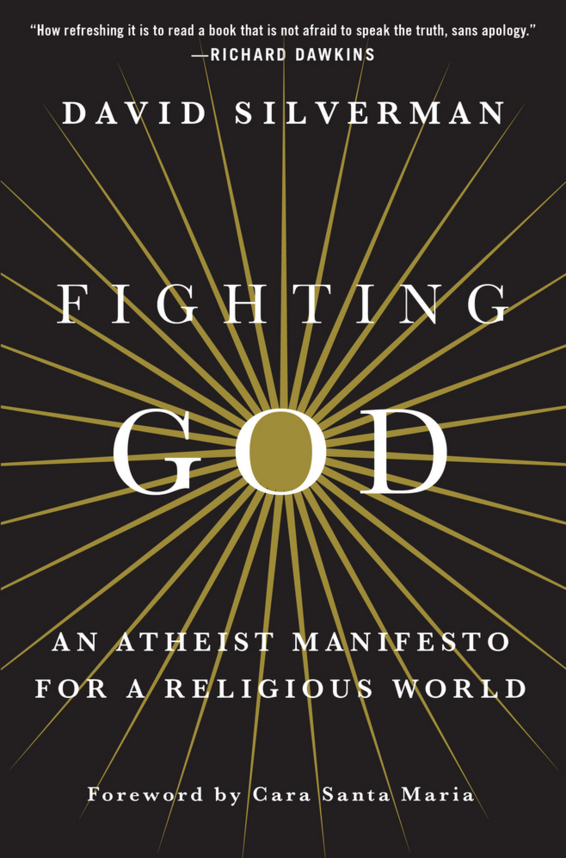