THE HEBREW WORD gvul has multiple, interrelated meanings: it may designate “a border,” “a boundary,” or “a limit,” depending on the context. Both activists and writers in Israel have used this ambiguity in debates about the country’s sovereign borders and its annexation and occupation of Palestinian land, highlighting questions of moral boundaries and the limits of power. Kfir Cohen-Lustig’s new book connects up with these debates in its exploration of physical borders, philosophical boundaries, and social limits. Makers of Worlds, Readers of Signs offers a historiography of Israeli and Palestinian literatures, examining the impact of globalization — understood narrowly as the opening up of a country’s economic borders to foreign markets — on works written in Hebrew and Arabic.

Literature itself is, in Cohen-Lustig’s formulation, a set of responses to “social limits” — a site where the metaphorical boundaries between the acceptable and the unacceptable, the imaginable and the unimaginable are negotiated. A Hegelian concept, this idea of “social limits” allows Cohen-Lustig to articulate a simple claim: that every historical period is marked by a dominant economic and political structure, which conditions not only individual and collective outlooks but also aesthetic representations of our psychic and physical realities. The literary works we produce and consume inevitably reflect the social structures underlying their creation, even when they actively challenge them.

Those familiar with Fredric Jameson’s theory of “the political unconscious,” or with his famous imperative to “always historicize,” will readily grasp the principle of studying literature for what it can teach us about social form. Makers of Worlds, Readers of Signs joins a Jamesonian trend in the study of Israeli literature and Israeli-Palestinian relations, embodied most recently in Oded Nir’s Signatures of Struggle: The Figuration of Collectivity in Israeli Fiction (2018). Cohen-Lustig’s book even features a brief preface by Jameson himself, in which the famed thinker tells the reader (or, rather, warns her) that the book “uses” literature “to make genuine History appear behind it.” Indeed, Cohen-Lustig is deeply concerned with the social and economic history of the region, arguing that the modern canons of Israeli and Palestinian literatures have been transformed in the past few decades by globalization and privatization. Most obviously, these processes have affected modes of literary production and circulation within and beyond the contested borders of Israel and Palestine.

Cohen-Lustig is critical of existing historiographies of Israeli and Palestinian literatures, offering a new chronological division that does not focus on national ideology and identity but rather on the degrees of “aesthetic autonomy” afforded to Israeli and Palestinian writers at different times. From the late 1940s to around the 1990s, the literatures of Israel and Palestine mirrored the blurring of boundaries between private and public life in Israeli and Palestinian societies. Hebrew and Arabic writers consciously participated, as Cohen-Lustig puts it, in the “making” of their worlds by responding to the imperatives of state building (in the case of Israeli literature) or to the struggles for national self-definition (in the case of Palestinian literature). They negotiated new political possibilities, portraying characters who represented competing ideological positions, or spoke in the name of a national collective in poems, essays, novels, and stories. The fact that literature served political goals, or took an active part in a process of world-making, seemed obvious to both Israeli and Palestinian writers during this period. Even when they protested against the subsuming of private into collective life (as in the work of Israeli writer Yeshayahu Koren), they acknowledged the limits imposed on them by their social circumstances. When they embraced political presence and engagement (as the Palestinian writer Sahar Khalifeh and her generation did), it was because they viewed their poetic activity as necessarily political.

The lines separating private and public life began being redrawn in Israel in the late 1980s and in Palestine in the mid-1990s. In 1985, the Israeli government launched an economic stabilization program that put the country’s economy on a path to marketization and financialization. A new perception of the relationship between the individual and the state ensued, generating unprecedented literary explorations of authority and identity. What most Israeli literary critics have viewed as a postmodern wave — novels narrated by fragmented voices, featuring satirical descriptions of the act of storytelling — Cohen-Lustig interprets as the outcome of globalization in Israel. Writers like Orly Castel-Bloom and Nir Baram became hyper-aware of the disentanglement of ties linking Israeli subjects to the state, developing new political sensibilities as a result. Their works often criticized Israeli institutions, from the military to the government, yet they shunned any act of “world-making” as Cohen-Lustig defines it, emphasizing instead feelings of personal helplessness and political betrayal.

In the West Bank and Gaza, history — and literature — followed a different yet broadly similar path. In 1987, the first intifada broke out, eventually claiming the lives of more than 1,300 Palestinians and approximately 200 Israelis before the signing of the Oslo Peace Accords in 1993. In the post-Oslo era, global networks of capital investment entered the occupied territories, mainly in the shape of foreign-funded NGOs. It was then that, as Cohen-Lustig puts it, a “symbolic separation between the political and civil spheres” seeped into Palestinian life and arts. Palestinian writers were still politically engaged, but their works were conditioned by the new social limits of capital. Literary works in languages other than Arabic joined the Palestinian canon, and the marketing mechanisms of Palestinian literature changed. Cohen-Lustig shows how the branding of Palestinian works in English translation metamorphosed to emphasize the individual and idiosyncratic instead of the collective and representative. In 1989, the American publisher of Sahar Khalifeh’s 1976 novel Wild Thorns had described it as “giv[ing] a true picture” of the Israeli occupation in Palestine, whereas Adania Shibli’s 2010 novel Touch was marketed as representing “the singular world” of its writer. As with Israeli literature since the 1980s, Palestinian literature since the 1990s has been translated and circulated as equivalent to other “peripheral” literatures.

The process of literary translation plays a key role in Makers of Worlds, Readers of Signs, though Cohen-Lustig hardly theorizes it. Contemporary classics of translation studies, such as Pascale Casanova’s 1999 book The World Republic of Letters and Franco Moretti’s 2000 essay “Conjectures on World Literature,” are praised for explaining how literary works and genres travel from the global “periphery” to the “center.” Yet they are also criticized for adhering to a purportedly irrelevant distinction between the nation-state and the world. Cohen-Lustig’s literary analysis assumes that our world is no longer neatly divided into nation-states but is rather “a globe in which capital, by weakening states, imposes an abstract equivalent space.” Through this idea of equivalence, Cohen-Lustig explains why Israeli and Palestinian literary works from the past two decades have come to resemble what is often dubbed “the global novel.” Whether this is indeed the case is hard to judge, due to the problems of “scale” in world literature identified by Moretti and others — the fact that critics can only read a limited number of works when they conduct their analyses. Cohen-Lustig himself examines closely around a dozen literary texts in Makers of Worlds, Readers of Signs. Yet it is often the work’s singularity rather than its uniformity that reveals itself to the reader through his analyses, prompting her to ask the kind of questions only implicitly answered in this book. Why do we read literature? Does it transport us beyond the borders and outside the limits of our own experience? Can it offer us nothing but proof, as Cohen-Lustig intimates, that global networks of capital have replaced nation-states?

Cohen-Lustig’s dismissal of the nation-state as an irreversibly weakened institution presents the reader with an even graver conundrum regarding the ties between literature and global politics. Contemporary literary works may be informed by the flow of capital beyond national borders and may even cross borders via translation, but people — including authors and readers — are increasingly barred from moving from one nation-state to another. In the Palestinian case, border crossing is doubly difficult since the respective de facto governments in the West Bank and Gaza have limited control over their ports of entry. Cohen-Lustig’s book argues against the idea that nationalism is the only prism through which Israeli and Palestinian literatures should be examined, but the power that nation-states still exert over vast populations remains frustratingly outside this study’s gvul. Nevertheless, it is refreshing to read an analysis of Israeli and Palestinian literatures that centers not on identity — national, religious, ethnic, or gender — but rather on the effects of capitalism on politics and culture.

Danielle Drori recently completed her doctoral studies in Hebrew and comparative literature at New York University. She teaches in various places in New York City, and is working on a book that explores the ties between Zionist politics and literary translations in Europe and Palestine in the early 1900s.

Makers of Worlds, Readers of Signs

Israeli and Palestinian Literature of the Global Contemporary 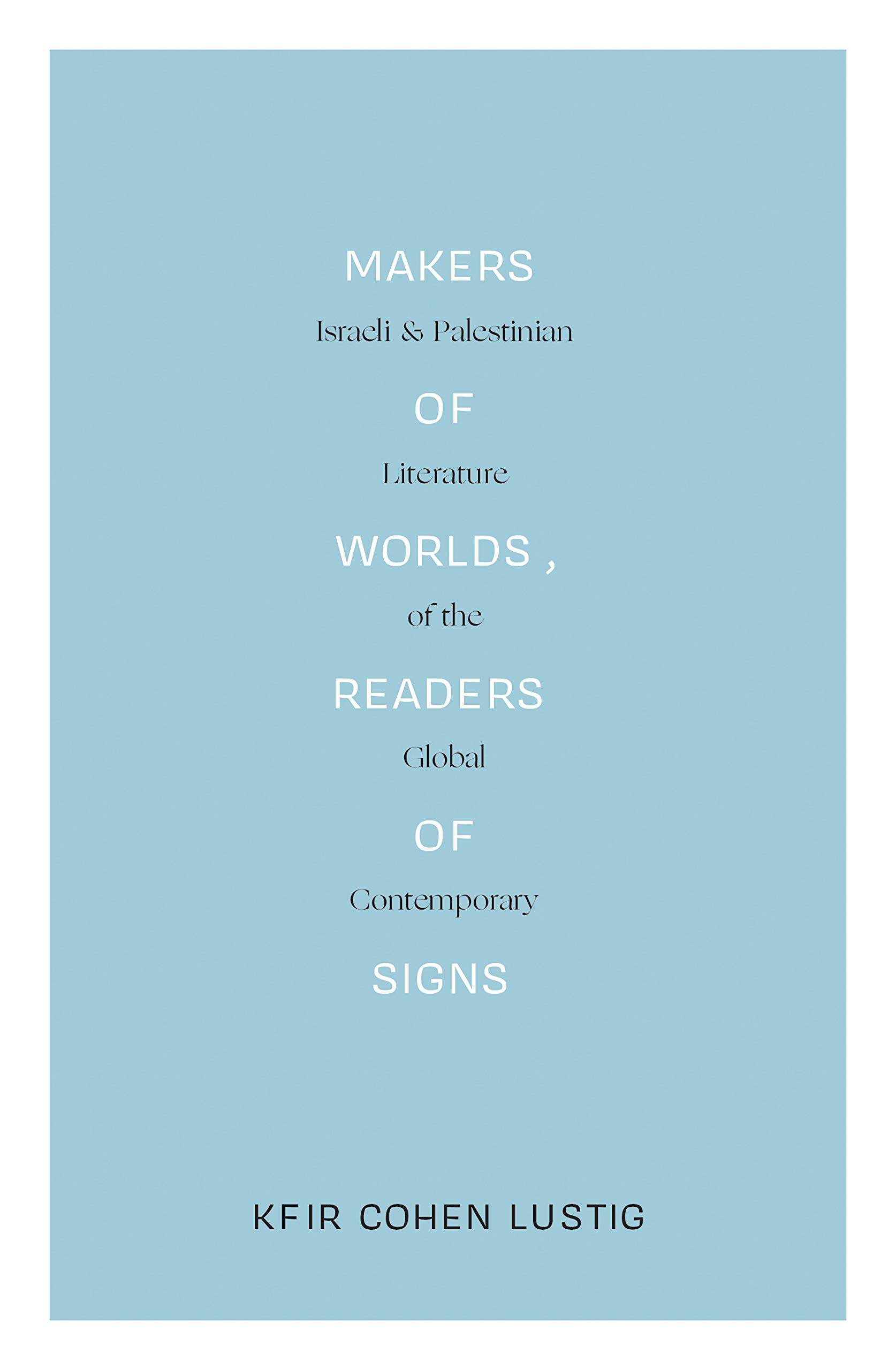