How do you get up in the morning?

By taking what Sydney Smith called “short views.” The distance from sink to bean grinder is negotiated with deliberate steps, no thinking allowed.

Do you succumb to nostalgia?

“Succumb” is too weak a verb for whatever it is that happens. But yes, profoundly.

Lunch with any three people who ever lived; who do you invite?

I tied myself into knots trying to compose a guest list-thinking ‘do I want hilarity, profundity, free-wheeling dissension, amity…?’ Lunch is about pleasure. Rabelais, Balzac, and Blaise Cendrars-to limit myself to the French.

What country would you like to be exiled in?

Is your study neat, or, like John Muir’s, is you desk and floor covered in ‘lateral, medial and terminal moraines.’?

A candid photo taken right now would put me in the company of Muir.

Anything red and hearty.

Refusal to believe that this will have been it.

How long can you go without putting paw to keyboard?

Not more than a day. As for putting paw there profitably–it always feels too long.

Sexy and dangerous, or brilliant and kind?

What’s the question or questions we should have asked, had we known?

What gets you started? How do you know when you’re ‘on’?  What part of the day is hardest to get through? What do you say when people ask you what you do? Why don’t you switch professions while there’s still time?   A: A string of words, the beginnings of a rhythm that feels right. B: When that rhythm develops and attracts, starts to feel irresistible to the mind’s tapping foot. C: Mid-to-late afternoon. D: Teach, edit a literary magazine. E: There isn’t still time. Besides, what could I possibly do? 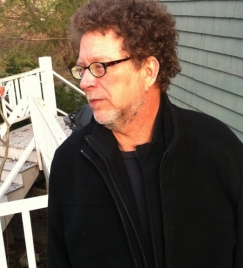