FOR CENTURIES NOW, the Babylonian Talmud has been generally regarded, by friend and foe alike, as the foundational document of Judaism — this term itself being something of an anachronism. Talmudic study — its melodies, rhythms, and counterpoints — has been the music of Jewish life, providing the background tunes for even the most everyday of Jewish lives to the extent that the great historical linguist Max Weinreich referred to all of Jewish life (at least in Eastern Europe, but it need not be limited thus) as “the way of the Talmud,” incorporating blessings and curses, proverbs, foodways, and, of course, not to be forgotten, ritual practices and avoidances.

The richness of this way of the Talmud is best experienced, for those who are not in it, through the great works of Yiddish literature, from Sholem Aleichem to Chaim Grade.

In his marvelous new book, Barry Wimpfheimer has undertaken to explain historically how the Talmud got to maintain its position within Jewish life. Pursuing the metaphor of a biography that the Princeton University Press series provides, Wimpfheimer treats the reception of the Talmud as an unfolding and augmentation of forces, describing the characteristics present within the text from its “infancy,” together with the substance it has acquired over the centuries and its growing power via canonization.

This is one part of the story that Wimpfheimer tells, emphasizing the book’s evolving reception. The commentaries on the text — by even its critics — are what lend it the power and authority that makes for a canonized text. (Here I disagree slightly with one of Wimpfheimer’s formulations: “canonized” is not equivalent necessarily to “holy,” although all canonization, even so-called secular canonization — as that of Shakespeare, for instance — is a sacralization.) That in itself is an important and illuminating critical move: the Talmud was not born canonical but became so, with the aid of the institutions and practices of learning, commenting, critiquing, and resolving difficulties that processed the text through the centuries. Moreover, it was those activities that created the way of life in which the Talmud was the soundscape for Jewish culture tout court.

But something much more impressive is being accomplished in this book. Wimpfheimer helps us understand what every student of the Talmud knows without necessarily being able to articulate: the Talmud is not the book at the center of the commentaries, but is the whole megillah, the process and the product too. Wimpfheimer offers something like a phenomenology of Lernen (the traditional name for the study of Talmud) and, with it, the best possible introduction, within the confines of a single volume, to the experience of Talmudic study. He does this by taking one typical (and typically difficult) passage, sugya, of the Talmud and reading it through ever more complex and ramified interpretations, medieval and early modern. We see the Talmudic text becoming ever stronger, but also ever richer in implications, as Wimpfheimer deftly explicates the differing interpretative ideas and methods of various authors.

The book is, thankfully, of a completely different genre from books on rabbinic literature that communicate nothing of the Geschmack, the “taste,” of the Talmud. Indeed, Wimpfheimer has given us an entire tasting menu — and has done so, remarkably, in translation. He has presented change through time, but he has also stopped time, as it were, and presented the richest synchronic picture of what the Talmud is, not just for its scholars but for its learners, in its role as the lifeblood of Jewish cultural existence. His is a thrilling biography, chronicling the subject’s development through its long life and depicting it both in maturity and in vigorous old age.

Readers who have never experienced the Talmud in their life now have a unique opportunity to do so. But Wimpfheimer’s book has much to offer to the more advanced students of the Talmud as well. One of his keen insights is that the canonical status of the Talmud for halakhic (legal) conversations and all that branches off from them is not matched by the aggadic (nonlegal, illustrative) sections, where the Talmud is only one voice among many. It is, of course, a commonplace assumption that the aggada is somehow less authoritative than the halakha; what is new in Wimpfheimer’s analysis is the suggestion that within the universe of ideas — and, thus, of what we might (mis)name theology — the Talmud has equal authority with the Palestinian Talmud, the midrashim (commentaries), and other such works, while in the realm of the law the Talmud reigns supreme and almost alone. This insight, moreover, is followed by a masterful and beautiful résumé of the reception of aggada, the different modes of interpreting it, and the homiletical impact it has had.

Wimpfheimer demonstrates, incontrovertibly, that “[b]y the dawn of the print era, the Talmud was the most important canonical work of Judaism, the source of law and ideology, and the object of the most important devotional activity — study.” But what about that vigorous and surprising old age to which I referred above? In the last section of his biography, Wimpfheimer describes the present condition of the Talmud, particularly, but not exclusively, in Jewish life. The discussion begins by analyzing the various kinds of opposition to the Talmud that have arisen through the ages, and especially in modernity, as well as its vitality in resisting such challenges. Wimpfheimer makes the point that by now it is not so much the Talmud itself that matters most, and not even the “enhanced Talmud” produced by the web of interpretations he traces so effectively, but the “emblematic Talmud,” the Talmud as synecdoche for traditional (not only “religious”) Jewish life. In doing so, he shows us that the subject of his biography is still very much alive.

Daniel Boyarin is Taubman Professor of Talmudic Culture and rhetoric at the University of California, Berkeley. 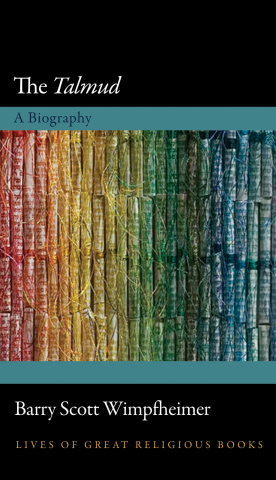