IN 1996, while I was still young enough to not yet feel ridiculous about such endeavors, I formed a living room garage band with an actress named Jennifer. We called ourselves Light Skindid, based on the way certain of us black people pronounce “light skinned.” Jennifer, all big curls and freckles, wasn’t truly light skindid. (A classic redbone is what she was.) And by summer’s end my own body is deep brown as an unwrapped chocolate bar.

Light Skindid was supposed to be about a sound. A lighter shade of black. Joan Armatrading meets Terence Trent D’Arby. A Joshua Redman solo. A vibe that was futuristic above all else. Inopportunely, Jennifer and I were shitty musicians. Light Skindid never took.

It seems happenstance that The Color of Water hit in 1995, although one never knows for certain what happens up there in the ether. James McBride’s hit memoir debut, concerning life with his white and Jewish mother, only hinted that its author could down the road become a don of light-skinned lit. The music was there though, and with McBride the music is damn-near e’rything.

Following up on the 2013 National Book Award–winning novel The Good Lord Bird as well as a factual take on James Brown that came out last year, McBride has let fly a dexterous and strategically doleful collection of short stories called Five-Carat Soul. So many of the warm stories gently nuzzle perfection, and at its best, his pages function as an idyll of light-skinned lit, a category distinct from the once-dominant “wypipo shit.” Only when the author gets chintzy with the music does the writing cease to soar.

The Five-Carat Soul Bottom Bone Band is a ’70s teen ensemble from an underside Pennsylvania neighborhood — The Bottom. Around the band’s leader, Butter, McBride has clustered four elegiac narratives about said band. The author was a pro saxophonist and composer before hitting it big in prose, and he plays his boy band like innocence instruments.

Smooth, bright, and just a few shades from appearing white, Butter works the organ at his Bottom church. And, even though he’s not part of Five-Carat’s rhythm section, Butter takes charge of tempo as well as tone: Butter don’t curse. Butter don’t move too fast; he never plays more than a smidge in front of the beat. And the boy’s underplayed Ebonics are impeccable, they leaven a potentially heavy darkness. Hear him describe, in “Blub,” a friendship shift with the story’s title character, “because we had a gig coming up”:

Of course, the gig was four months away, but a gig is a gig, so we was rehearsing hard and smoking a little weed and drinking a little Thunderbird wine, and rehearsing some more, ‘cause that’s what you do in a street band when you about to go to high school. You get ready for gigs. It don’t matter that gigs mostly never happen. That’s not the point. A gig is a gig.

We do not see or hear the band gig or even really practice. McBride offers only artful allusions, making implicit that the music offers an escape from the pervasive ills of The Bottom. Crime and wrongdoing is all about Butter and his fellas. Yet the brokenness plays out in a fashion way more hopeful than the key McBride would be forced to play in, were his time frame a decade later.

Drummer Goat grows indelible through the pages not because of how he bangs the skins in time, but because of how he daily chases on foot behind his daddy, who’s on a bike. Dex playing guitar can’t keep him from being overshadowed by his mentally challenged brother handing out naked pictures of their mother. Mr. Woo runs the store beneath the rehearsal space and the aforementioned Blub buries the wrong roadkilt kitty to impress a girl. Blub ends up facing hard prison time by the end of his feature. The two events are probably not related, but McBride makes them feel as though they might be.

The voice of Butter is virtue in this place where social isolation causes childhood names to hang around inappropriately long. It is, too, the sound of aspiration. The kid’s keyboard aesthetic swirls coherence about the madness, wrangling in reason via the most Christian of fashions. Far from showy or dogmatic — the crookedly protesting black preacher is McBride’s idea of what a villain looks like — Butter does from story to story offer kernels of insight that bolster the action.

In “Goat,” a glorious tale about the mundane task of obtaining birth certificates, McBride has Butter falling in love for the first time — in counterbalance to his guitarist’s father issues. Butter’s adorably betwixt-and-between nature is on emblematic display when Miss McIntire, the teacher he’s crushing on, asks Butter to run the story’s culminating errand, for “two whole dollars”:

She leaned over at her desk and opened a drawer to give me them double dollars, which gived me a chance to peek at some other doubles, them two brown bunnies paired up beneath her blouse, knocking about as she fumbled for her purse, that same pretty purse that sat on the seat of her car as she drove past The Triangle that day just before last summer. I ain’t worth two cents, is what I thought to myself, for this is the very thing they be hollering about in church. I had a fit with myself, standing there watching her knockers. But she wasn’t paying me no mind. She had opened the purse and pulled out her wallet and was fumbling around through it, and that’s the last I seen of her that day, for by the time she had flipped through the tiny papers and books and matches and little papers and got to the crumpled dollar bills in that wallet and was holding them up in her hand, I was out the door. I had snatched the thick envelope off the desk and was gone.

Goat. Blub. Butter. In the world where formulations like “for” and “gived” every youngster who’s granted a voice in Five-Carat Soul has their own distinct flavor of innocence. Not a single sentence feels hemmed in by the imagination limits of white editors. There’s not a double-negative or repetition out of place, and McBride never gets ahead of the beat. Your heartbeat.

This is the part where I take a crack at explaining why throughout my reading of Five-Carat Soul I kept hearing the music of rap superstar 2 Chainz in my mind. Famously the one-time drug dealer works in the “trap music” genre, hip-hop straight out of dope houses. ’Tis the antithesis of light skindid. 2 Chainz himself is a jet-black, 6-6 purveyor of base revelations. Where Butter melts in, this cat never fails to call attention to himself. For James McBride, the rapper would quite literally represent The Darkest Timeline.

Which is why McBride’s writing seems uninterested in transcending Beautiful Nostalgia status: “Ain’t no Butter No More,” but the echo’s sure easy to groove on. And those waves from outside this collection’s Bottom Band section revel still deeper in America’s intensely racialized past, revel as though the author was built to revel.

“The Under Graham Railroad Box Car Set” concerns a priceless toy train, pursued by a vintage toy seller and possessed by the poverty-stricken Reverend Spurgeon Hart. The reverend don’t see no need for the millions the train might bring, and it’s hella fun watching the veteran merchant try to give him dough. (As with every entry here, the author careens gracefully from episode to episode. Warm belly smiles are what readers earn for coming along on the ride.) Possibly just as wonderful is “Father Abe,” in which a five-year-old orphan at the Civil War’s close is convinced his father is The Man Who Freed the Slaves. When little “Abraham Lincoln” gets free from the orphanage, the inclination is to follow him any- and everywhere.

In his lesser pieces, physical fighting is a recurring subject. There’s boxing and there is war, and McBride seems unaware that the stuff, as presented, is a lot more interesting to him than it is to us. “The Moaning Bench” has a battle that runs far, far too long, with blow after blow documented to the point of tedium. What’s more the humor here feels neutered without the robustness of The Bottom boys’ innocence, leaving two pugilists to pound and ponder. Make no mistake: Every story in Five-Carat Soul brings a professional spit-polish, but with severely diminished input of children, much of what follows the eponymous section lacks magic. And magic is everything with this cat. The lesser pieces are well-executed tricks that pay off with minimal flourish. Previously unthinkable, James McBride transforms into just another guy.

2 Chainz kept recurring for me because a subtext of this collection is the author’s comfort zone. Of course this is the case with every writer. With McBride though? The issue, for certain of us readers, gets all up in the faces. Abraham Lincoln appears again. Christianity is even higher up in the mix than anti-rap slams. McBride can’t get away from these themes, nor should he, probably. Coming across like the Second Coming of Mark Twain is at once a major achievement and a safe bet.

Still, it’s hard not to contemplate the ultimate value of such fine prose when most of its insight is in the rear view. The world, we’re constantly reminded, ain’t gettin’ no lighter.

Donnell Alexander is a writer whose work has been featured in Time, The Nation, Al Jazeera’s “Inside Story,” and Economic Hardship Reporting Project. 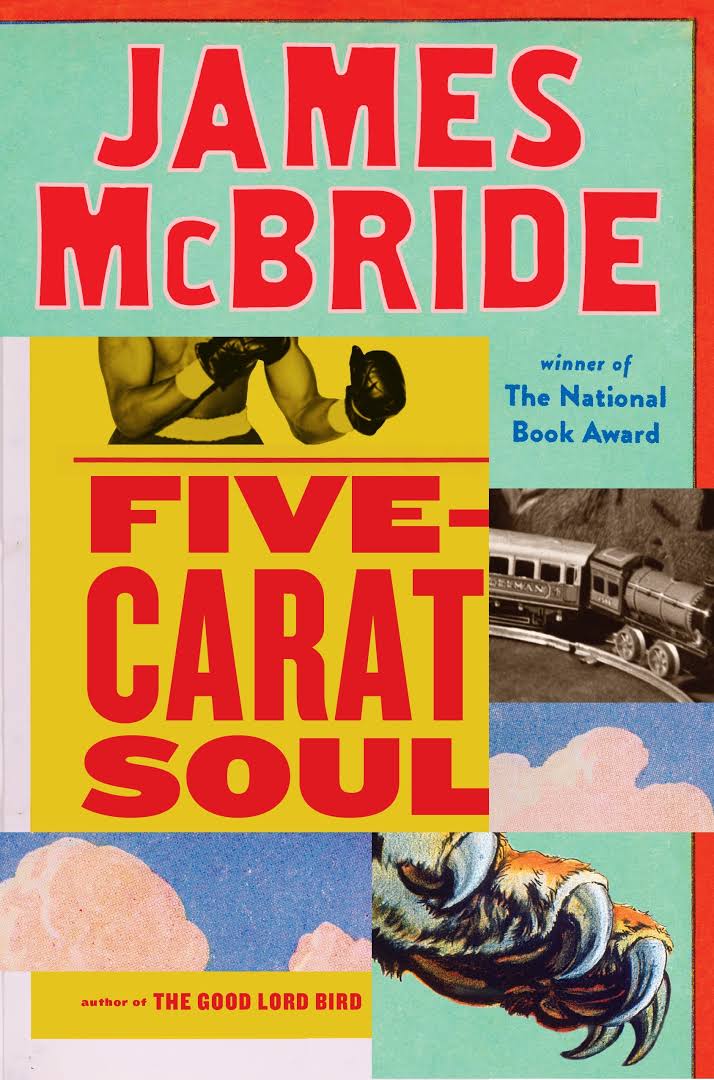