GORSKY IS THE WEALTHIEST MAN IN LONDON. His riches are legendary, though nobody is certain how he earned them, and dark rumors swirl. He is an outsider: born and raised somewhere in the USSR (nobody is sure exactly where), he made his fortune in the economic chaos of Yeltsin-era Russia before moving to the West. He’s an outsider in another way: he rarely makes public appearances and has an extremely exclusive inner circle of associates. This is in spite of the fact that he organizes and finances some of the most spectacular social occasions of the capital’s calendar. Thanks to the narrator of this book, however, we’re given a privileged insight into the heart and soul of this mysterious man. There we find turmoil: for Gorsky is in love, with a married woman. He is obsessed. And the whole, fantastic facade of his life is the result of an intimate, some might say mad scheme to get close to her …

For anyone who studied English-language literature in high school or university, and even for a great many of those who didn’t, this description ought to be ringing a few bells. The simplest clue is the eponymous name of the book’s hero, and it must have been tempting for the author to title it The Great Gorsky. It’s probably better that she didn’t, because making too rigid an identification with F. Scott Fitzgerald’s masterpiece would almost inevitably prove unfavorable; indeed, there’s a lot of clear water between the two. That said, Vesna Goldsworthy’s fiction debut — her memoir, Chernobyl Strawberries, has just been published in a 10th anniversary edition — is an impressively accomplished retelling of the Gatsby story and is a rewarding read in its own right.

The narrator, Nikola Kimović — he calls himself “Nicholas” for the sake of the simple English — is also an immigrant to the British capital, having fled the summons of the Serbian army as a young man. His trajectory has been less spectacular, though: an English literature PhD, he’s managed to find work as a sales assistant in a horribly loss-making but charming bookshop tucked away in the backstreets of Chelsea. Into his sloth-like life one day strides none other than the oligarch Gorsky, who, writing a cheque for £250,000, commissions him to curate a new private library, the finest in Europe, with a special emphasis on Soviet art. It’s no coincidence that another Russian customer, the astonishingly beautiful Natalia, has a particular interest in such literature. Gorsky is plotting to woo her with the most fabulous art and book collection that money can buy. Nicholas becomes much more than a middleman between the oligarch and book dealers: he finds himself acting as a proxy in the tortured triangle of Gorsky, Natalia, and her husband, the Englishman Tom Summerscale.

From the beginning, Vesna Goldsworthy impresses with the precision of her prose, the control of her narrative, and her turn of phrase. Gorsky wears “tailored worsteds so ripely English that at first I thought he could only be Prussian”; Nicholas summarizes his émigré self as “tumbleweed, a species that disengages from its roots once matured”; and Natalia “made you feel vulgar because you dared think that money had any bearing on anything.” With many such a graceful line, Goldsworthy neatly captures the essence of an attitude or situation, and this is never more true than in her descriptions of London and the relationship the city has with its awkwardly aloof foreign billionaires. In the heart of this metropolis — whose sunlight is rarely stronger than “a thief’s promise” — Gorsky goes about in chauffeured limousines or by helicopter, sending minions out to do much of his bidding, and seldom engaging with the “people” — unless you count being waited on by immigrant staff. When, in one instance, he spontaneously decides to hail a black cab, he’s fascinated to find himself so close to “normal” life. He both admires and dislikes the English capital, declaring: “Don’t you just love London? Centuries of uninterrupted cash-flow … But I don’t like the English … They have an amphibian quality, a slipperiness that comes of their squatting on an island, able to evade the grasp of their neighbors.” Confined as it largely is to the “Chelski” area of London — the playground of the world’s rich — the novel nevertheless offers intelligent insights into the bizarre dynamics of the city, the huge discrepancies in wealth and lifestyle, and the strangely affectionate cynicism of many of its inhabitants.

This makes for particularly interesting reading at a time when the British and the Russians eye each other with as much distrust as ever before, and it seems to me that this constitutes the real, valuable essence of the book. Goldsworthy is herself an immigrant to the UK: she was born Vesna Bjelogrlić in what is now Serbia but was then Tito’s communist Yugoslavia. A journalist and academic by training, she has devoted much of her career to the study of representations of Balkan culture in the West. She’s therefore in an excellent position to survey — and perhaps parody — the nature of the odd compromise made between the Slavic world and the Anglo one. There is a large caveat to this, of course: namely, that the subjects of her book are mainly the super-wealthy and, therefore, don’t reflect the average nature of Anglo-Russian relations. Nevertheless, the choice of a Gatsby-based oligarch character is an interesting and informing one. Gorsky’s habitation of London is justified purely by expediency and by the fact that the city caters so well to the lusts of the super-rich; he lives isolated from the real lives and views of his adopted peoples. Tom Summerscale, the native Englishman, is actively hostile to the Jewish Russian interloper, but suffers from a large degree of impotence as Gorsky’s superior financial firepower commands greater sway. Amongst the different Slavic immigrants themselves, relations are loose and confusing: they all seem vaguely lost and ghost-like, somehow missing the (often more painful) certainties of their former existences. This reflects well, I feel, on the recently exaggerated sense of dislocation between Slavic viewpoints and those of the Occident.

Gatsby is, in many ways, a fitting model to hang the tale on. The intriguing thing about Fitzgerald’s creation is the way that it seems at one and the same time to concern us totally and not at all. The detached extravagance of these characters is bewitching, but the very human yearnings behind the glitter bring them to our level and arouse our empathy. I would venture that the same applies to contemporary relations between Russia and us, inasmuch as, while the great displays of military might and patriotic pride are awesome, they can fatally disguise the common interests that in fact exist between the peoples.

As far as comparisons between Gorsky and The Great Gatsby go, this mirroring of plots is the new book’s strength. In other respects, the comparison doesn’t hold to scrutiny. Firstly, it’s probably true to say that there are few writers to match the poetic grace of Fitzgerald’s peak-condition prose; imitation, therefore, is more likely to be flattering than truly successful. Secondly, the characters in Fitzgerald’s work crackle with a much greater psychological intensity and explosiveness than do those in Goldsworthy’s. Nicholas Kimović lacks the subtle, somewhat wrathful energy of Nick Carraway that constantly imperils his friendship with the millionaire — the sense of tragic disdain is lacking. Fitzgerald was a master of insinuating the psychological turmoil that could lie behind affectations of ease or grace; Goldsworthy’s reclining figures seem more wooden and less potentially astonishing. Whilst Nick Carraway is a sexually muddled narrator, the energy of that love story is powered by Fitzgerald’s own Gatsby-like fixation on the muse of Zelda; for all that Goldsworthy’s voice-throwing is impressive, I can’t help but feel that the rendering of Gorsky’s obsession is lacking in that psychological fuel.

Important to remember is that this is a first novel from a proven journalist, essayist, and poet. Sure, it’s no Gatsby, but that doesn’t mean it’s not a good yarn with valuable insights of its own. I’ve no doubt readers will appreciate it, and its revival of Jazz-age concerns in a world relapsing into similar economic extremity is a worthwhile premise. 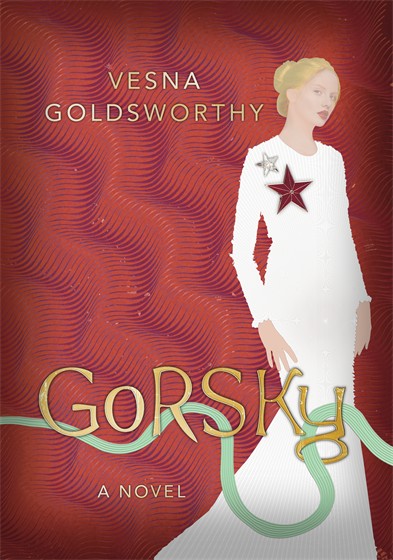