FRIENDSHIPS ARE AUTONOMOUS REGIONS with their own languages, folkways, and treacheries. Old friends are telepathic and get each other’s jokes. What they don’t say is heavy with significance. It’s not always a case of “opposites attract,” nor are friends necessarily “two peas in a pod.” Rather, long-lived friendships, more than some marriages, embody the nation’s motto: e pluribus unum.

When Anthony Hecht and William MacDonald first met in Rome in 1954, both were young, unknown, and unproven. Hecht, 31, had just published his first poetry collection, A Summoning of Stones, and was on a Guggenheim Fellowship; MacDonald, 33, was on a Rome Prize Fellowship at the American Academy. Hecht went on to become one of the leading postwar American poets, and MacDonald would occupy a comparable place in the field of architectural history. A Bountiful Harvest, edited by the British publisher Philip Hoy, documents their 36-year correspondence. That may sound dry and academic, especially as both men were, in fact, academics. But it isn’t. Seldom has a collection of letters read so consistently laugh-out-loud funny, before turning unexpectedly sad. Hecht and MacDonald were men with well-exercised comic senses, not afraid to be ridiculous, whimsical, scatological, or scathingly critical of acquaintances and public figures. Their letters are filled with puns, put-ons, mock pedantry, and even a protracted exchange of Polish jokes. Both possessed a gift for inspired Monty Python–esque silline­ss.

Hecht and MacDonald were also strongly competitive in an adolescent sort of way. Each tried to outdo the other in the outlandishness of the letterheads on their stationary, even enlisting friends to scout for exotically unlikely sources. MacDonald types on paper from the Byzantine Institute, Twentieth Century Fox Film Corporation, and the Tom Sawyer Motor Inn in Albany, New York. Hecht replies with letterheads from Dubai InterContinental Hotel, Fudan University in Shanghai, and Croisière de Musique à bord Mermoz. They address and sign their letters and postcards with goofy pseudonyms: Admiral Dewey, Milton of Saudi Arabia, Walter Ego, Irving of Arimathaea, Comrade General Ivan Ivanovich, Ethelred the Moderately Well-Prepared, Timon of Brooklyn, and, with a nod to W. C. Fields, A. Pismo Clam. Hecht and MacDonald, serious and scholarly men, never lost their giddy sophomoric streak.

Hoy’s editing is heroic. He reproduces 403 of the 440 known surviving letters and postcards, and annotates them sparingly, enough to orient readers who are likelier to know more about Hecht than MacDonald. He divides the collection into three chronologically arranged sections and provides useful biographical introductions to each, as well as a chronology and glossary of names. We follow the men through marriages, divorces, births of children, job changes, disputes with editors and department chairs, honors, and illnesses. In 1981, MacDonald is diagnosed with myasthenia gravis, a chronic autoimmune, neuromuscular disease without a cure. Typically, he jokes about his illness: “Serious. Ho-hum.” Hecht had never heard of the disorder and thinks MacDonald is kidding. A telephone conversation follows, and Hecht apologizes. With touching thoroughness, he studies his friend’s disease, speaks with doctors, and, characteristically, looks up myasthenia gravis in the latest supplement of the Oxford English Dictionary. In a letter from February 1982, Hecht, at his wife’s suggestion, invites MacDonald (who teaches at Smith College and lives in Northampton, Massachusetts) to move into their house in Rochester, New York: “You could, therefore, have a suite of small rooms of your own, including, of course, a private bath. And there would always be someone around to help or drive or attend in whatever way.” MacDonald declines, but writes, “Friends, old friends, good friends, are the most precious things in life. They really are the only people who can help. The children want to, often, but through no fault of their own they can’t in any serious way.”

A Bountiful Harvest reads like an epistolary novel, complete with drama and comedy, subplots and ancillary characters. But even before I started reading, I noticed the correspondence had ended abruptly in 1990. I knew Hecht lived until 2004, and the dust jacket informs us that MacDonald died in 2010. What happened to end their friendship? Diplomatically, without taking sides, Hoy explains in his afterword: “The answer is that the friends had a serious falling out.” Not surprisingly for two deeply learned men, it was triggered by a difference of opinion over a bit of Roman historical/architectural arcana.

In September 1990, Hecht and his wife hosted a dinner party for MacDonald and a friend of their son. Conversation centered on Trajan’s Column in Rome, completed around AD 113. The column is the central image in Hecht’s 1971 poem “The Cost,” later placed as the first poem in Millions of Strange Shadows (1977). A young Italian couple circles the monument on their motor scooter. The column’s 600-foot spiraling frieze recounts Trajan’s bloody campaigns against the tribes of Dacia. The lovers are oblivious to this ancient history: “All of that youth and purpose is, of course, / No more than so much dust.” But the speaker forgives the young couple their heedlessness in the final stanza:

And why should they take thought
Of all that ancient pain,
The Danube winters, the nameless young who fought,
The blood’s uncertain lease?
Or remember that that fifteen-year campaign
Won seven years of peace?

During the dinner, MacDonald informed Hecht that the Dacian Wars had lasted two or three years, at most, and not 15. “If he was shocked by what MacDonald told him,” Hoy writes, “he was also at a loss to understand why his friend hadn’t said anything about the matter before.” When asked, MacDonald said he had remained quiet because he didn’t think the error compromised the intent of the poem. Hecht was outraged and dismayed. Hoy explains, “For [Hecht], a poem that is trying get at the truth about something, and whose argument depends upon statements advanced as historically accurate, cannot survive unscathed the discovery that those statements are false. It belittled the importance of poetry to suppose otherwise.”

Hecht’s wife told Hoy he stayed up all night after the dinner, searching his library for the source of information about the “fifteen-year campaign.” Though partially vindicated when he located it, Hoy writes, “[H]e also realized that the source was an unreliable one, and that he’d been unwise to rely on it.” The following day, Hecht telephoned MacDonald and, Hoy tells us, “[T]he conversation did not go well. Indeed, it seems to have gone quite badly, and when the call came to an end, it did so with both men feeling upset and aggrieved.” Hecht’s final letters to MacDonald are missing. A postcard from MacDonald dated November 13, 1990, contains a single sentence: “I suggest a long moratorium, after which we might talk if both of us wish to.” At this point, the sense that we are reading a story, and that a denouement may be at hand, grows stronger. On February 1, 1992, MacDonald writes that he is about to undergo triple bypass surgery. “Your letter has been put aside, unopened,” he says, “with other things to be attended to later on.” The following April, MacDonald writes, “Thanks for your note of long ago. I am almost fully reanimated, as the medics say, and am back at work at last. It was in some ways a horrible experience, brightened by the care of the hospital nurses and staff.” No more letters or cards follow. That’s the end.

By the time readers learn of the permanent rupture in the friendship, they may recall that Hecht, in the preceding 500 pages, has never written in detail to MacDonald about writing poetry. Hecht was in his poetic prime, composing the work collected in Millions of Strange Shadows and The Venetian Vespers (1979), his most accomplished and lasting work. For Hecht, poetry seems to have occupied a private, heavily guarded realm — hardly an aberration for a poet. By sharing “The Cost” with MacDonald, Hecht had allowed his friend into that near-sacred realm; by not telling Hecht about the error when he had the opportunity, MacDonald had profaned it, or so Hecht chose to think. We’ll never know if Hecht ever swallowed his pride and forgave MacDonald, or if MacDonald could have accepted such forgiveness. But one may hope so. In “Sarabande on Attaining the Age of Seventy-Seven,” published in 2000, Hecht characteristically refused to exempt himself from moral strictures:

The dramatis personae of our lives
Dwindle and wizen; familiar boyhood shames,
The tribulations one somehow survives,
Rise smokily from propitiatory flames

Of our forgetfulness until we find
It becomes strangely easy to forgive
Even ourselves with this clouding of the mind,
This cinerous blur and smudge in which we live.

The Correspondence of Anthony Hecht and William L. MacDonald 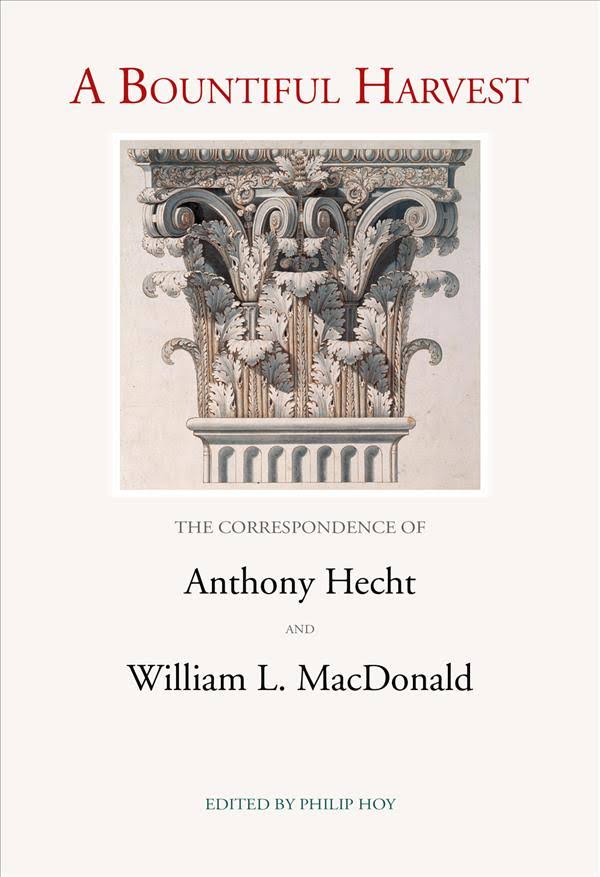