This piece appears in the Los Angeles Review of Books Quarterly Journal: Weather, No. 24

To receive the Quarterly Journal, become a member or purchase at our bookstore.

For a long time, for about a billion years, green and purple photosynthetic bacteria had the run of the planet. They floated in community mats, absorbing light and engaging in carbon fixation. The atmosphere was stable, the environment unchanging: that period of quiet stability is called the Boring Billion. Then there was a Great Oxygenation Event, which ushered in the next era, called the Interesting Billions. Squeaky species appeared, and quacky species and screechy species and one very speechy species. Hadrosaurs appeared and crashed around, monkeys appeared and fell out of trees, snakes appeared and freaked everybody out. Wolves appeared and turned into poodles, wolverines appeared and devoured their betters, Betsy the fiddler appeared and played “Go to the Devil and Shake Yourself”. Now, it is hard to know much about bacterial cogitation, bacteria being so sphinxlike, but maybe every once in a while they think wistfully back to that earlier era, before all the hullabaloo. Maybe they wrinkle their noses at us from their sludge lagoons.

But of course, if they don’t like the commotion, then they should never have produced all that oxygen — for that is what they were doing, during the Boring Billion. Isn’t that the way it goes? There you’ve been, meditating tranquilly, attaining such absorbing focus on your inhales and exhales that you have no idea how many eons have passed — only to look up one day and see that your respiration has been quickening hippos and hippies and tropical boubous, people singing “El Loco Cha Cha Cha,” wallabies going boing-boing-boing. The Great Oxygenation Event is also known as the Oxygen Catastrophe.

And ever since the advent of oxygen, nature has been on one long upward march to imperfection — except for the popes, of course, who have been marching in the opposite direction. Over the centuries, the popes experienced something called “creeping infallibility,” but for the rest of us it has been a story of creeping fallibility. The unicellular organisms just do not seem to make as many mistakes as us multicellular individuals. The more innards, the more errors, which is even true for plants. A vascular plant might mistake a warm winter’s day for spring and send the sap flowing prematurely, but liverworts would never do that. To err is ash, to err is maple, to err is celery. Panegyrics are passé. Humans do not have the corner on fallibility, though we might have the corner on run-on sentences.

To err is manatee. A manatee might mistake a swimmer’s long hair for shoal grass and start munching away, oblivious to the attached figure. To err is baby elephant, tripping over her trunk. To err is egg-eater and moonrat and turnstone and spaghetti eel, and whales, who eat sweatpants. Even the dinky species mess up, like the gerbil father eating his own babies like little ice-cream cones. To err is Pomeranian: the foster puppy I fell for turned out to have faulty wiring, to be a fluffball of fury, protecting me from all the nice neighbors, especially the nice neighbor lady in the hot red shoes. Sometimes he mistakes me for a nice neighbor and savages my ankles. Perhaps he was born into the hollow of a tree and then the tree was struck by lightning. Perhaps, just as he was trotting by the open door of a storefront church one summer evening, they were performing an exorcism. Now he is my dread fluffy little master.

To err is human: witness all the piano crimes, clarinet crimes, and drum crimes being committed on stages all over the world. Witness our inventions: to err is airplane. Witness our conventions, which seem to be standardized mistakes. Witness the mistakes where we get the early-morning sorries, and the mistakes where we get no more mornings. Witness our conscious mistakes, unconscious mistakes; fresh mistakes, stale mistakes; our wild mistakes and our timid mistakes, where timidity is itself the main mistake. Timidity turns you into a personless person, and a personless person is the same as a mooseless moose or a squidless squid. Oleg minus a leg equals Oleg; but Oleg minus Oleg equals zero. Stop phantoming around before your time.

To err is human, ye — however, as humans like to identify as all kinds of different things, grammarians, head honchos, paddleboarders, saints, etc., the adage can be made more specific. To err is grammarian, to err is saint — Saint Augustine sure had some erroneous ideas there. To err is penny-pincher, to err is pagan: there seem to be as many different kinds of mistakes as there are identities — even angel mistakes — because remember that one time when you had to fire your angel?

Those who identify as sea slugs make mistakes, too. To err is sea slug; however, to learn from your errors is also sea slug. If you attack a Flabellina and it stings you, you can undulate away and remember, the next time you see a Flabellina, that Flabellinas are the nastiest, most maleficent little poisony pink-and-purple fringes, and you can prudently not attack it. From sea slugs we can learn to learn from our mistakes. (From Flabellinas we can learn to sting our attackers.) Once my borscht tasted strange, almost soapy, and then a pale green wax congealed on the surface, and a wick floated up, and thence I learned not to balance sandalwood candles on the ledge by the stove. One night I forgot to put the lid on the honey jar and the next morning I found a mouse swimming in the honey, in slow motion. Once I invited Gwendolyn and Gwendolyn to the birthday party but forgot to invite Gwendolyn. These and millions of other blunders have taught me millions of things. The Earth is no longer a good lounge but it is a good school.

Of course we haven’t learned from all our mistakes yet. It was probably a mistake to throw all those sweatpants in the ocean; a mistake to give our hearts to telephones, televangelists, etc.; to celebrate the celebrities to that extent, while turning the baby cows into schnitzel; to let our herds overgraze the grasslands, rendering the land so dry the only water is tears. It was probably a mistake to get into such a torrid affair with Dogma, leaving Laughter and Philosophy to huddle together in the closet like two neglected children.

But after our substance thickens, our mistakes thicken too and it gets harder to outrun them. And sooner or later the undertakers start to gather. And after they are through with us perhaps we will go to heaven, probably bonking into the stars on the way. Or maybe there will be Billions with no modifiers, during which we will bonk into nothing, during which we will make no mistakes, which to some of us sounds slightly thrilling — those of us who feel like everything we ever did was a mistake. We’d stop making incompetent mistakes only to start making competent mistakes. Sins against decorum felt like terrible mistakes in the short term, but in the long term decorum seemed to be the fundamental blight. We’d even mess up on the paltriest projects — once when I was constructing a hovel I installed the wrong plank in the wrong place, which pulled the whole thing out of whack. Now that hovel stands there on the hill, a discredit to me.

If we could retract all the discreditable hovels, all the sweatpants from the ocean, all the soggy words, fishy words we’d said, all the musical crimes, all the imperfect pets; if all the mistakes were retractable and had hinges and would fold up and recede, I suppose we would have to fold up and disappear too, for even if we were not ourselves mistakes, some baby or other in our lineage surely was. The fallible wallabies would have to go, along with all the other furbrains. Goodbye, wallabies, goodbye catastrophe. Absent thee and absent me, the world would return to serenity, to the longueurs of perfection, and there would just be the bacteria and the popes left. Really the only problem with retracting everything imperfect would be the goodbyes. For there has never been a perfect goodbye, not one, and goodbyes can prove impossible to retract.

Amy Leach is the author of Things That Are (Milkweed, 2012) and The Modern Moose, forthcoming from Farrar, Straus & Giroux. 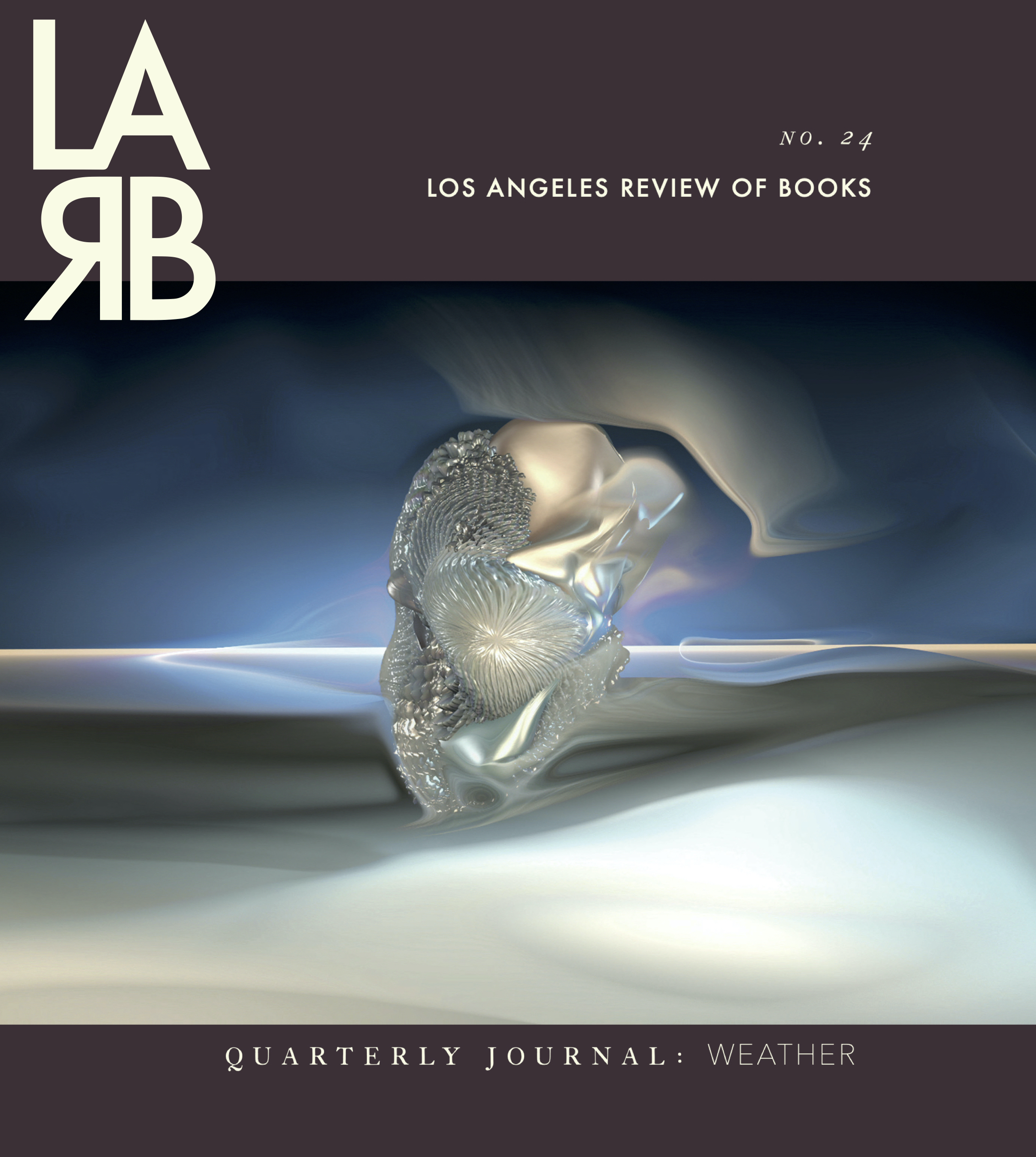