[This is part of a larger essay by Joy Horowitz, “Signs and Wonders,” here.]

The Golden Gate Bridge is a global icon. … It was shaped by the City Beautiful movement, the Progressive Era, and the Great Depression. More mysteriously, the bridge expresses those forces that science tells us constitute the dynamics of nature itself. … Although the result of engineering and art, the Golden Gate Bridge seems to be natural, even an inevitable, entity as well, like the final movement of Beethoven’s Ninth. In its American context, taken historically, the Bridge aligns itself with the thought of Jonathan Edwards, Ralph Waldo Emerson, and other transcendentalists in presenting an icon of transcendence: a defiance of time pointing to more elusive realities. Were Edwards, Emerson, or the Swedish theologian Emanuel Swedenborg, a mystic thinker of great importance to the formation of American thought, alive today, they would no doubt see in the Golden Gate Bridge a fusion of material and trans-material forces, held in delicate equipoise.

For all that, the Golden Gate Bridge is a bridge.

KEVIN STARR, USC PROFESSOR of history and California’s emeritus state librarian, tells a mostly rosier story: for him, the “giant harp hung in the western sky” is nothing short of “a triumph of engineering and a work of art.” When tending to details about the construction of the Golden Gate Bridge, like the challenge of creating its extraordinary suspension system, Starr is at his best:

The Golden Gate Bridge, in short, would be required not only to be the longest suspension bridge in the world, it would also be required to possess the strength and flexibility of a great ship at sea, enduring gale force winds, as well as being a land-based structure capable of withstanding recurrent tremors in the earth, eventually even that great earthquake that all Bay Area residents, however subconsciously, realized would one day again strike their region. […] And finally, the Bridge would have to be beautiful, very beautiful, to be worthy of the beauty of the Marin Headlands, the Pacific, and the pastel Atlantis rising on the short of the Bay.

The Golden Gate’s story is indeed one of “beauty and life linked to death,” which might explain why the bridge, like the Hollywood sign, has served as the site of so many suicides.

At times, Starr’s writing borders on grandiloquence. In one especially florid passage, he announces his love for the bridge: “Like the Parthenon, the Golden Gate Bridge seems Platonic in its perfection, as if the harmonies and resolutions of creation as understood by mathematics and abstract thought have been effortlessly materialized through engineering design.” He pays shorter shrift to the less aesthetic question of worker safety. He tells us of the nineteen men who fell into the net and survived to become members of the Halfway to Hell Club, for instance, and of the bolts that one worker complained were “too goddam short,” costing the lives of ten men on a single day. But he only obliquely mentions those unfortunate workers who were plagued by lead poisoning from primer: “the infirmary had a steady population of lead-poisoning victims, some of them damaged for life.”

Still, Starr’s trenchant understanding of the bridge’s place in American history coupled with a sparing use of luscious photographs, makes his book itself an impressive work of art. In fact, I was so moved by Starr’s valentine to the Golden Gate, that I felt compelled to drive up the 101 from Los Angeles and make a pilgrimage. As luck would have it, the Golden Gate was shrouded in fog the day I drove over it. But its massive towers — what Starr calls “sculptured monuments heroic in scale” — pierced through the grayness by the time I looped onto a sunny hiking trail atop the Marin Headlands. As I listened to the rhythmic fog horns and soaked up the majesty of the orange-painted steel against blue sky, it was impossible not to appreciate the ten workers who fell to their deaths during its construction on February 17, 1937, when a platform collapsed and their safety net gave way. And I felt a deep sense of wonder, knowing that once upon a time in America, a bridge like this one had been built to last a thousand years.

Read in tandem, Starr’s book and Leo Braudy’s book on the Hollywood sign offer a concise but compelling reflection on California history, from the evolution of Hollywood as a prohibitionist enclave in the south to the expansion of suburban Marin County to the north (which was the primary reason for the Sierra Club’s opposition to the Golden Gate). Both books are slim. Both are elegantly written. And both are the works of well known historians — California icons in their own right — whose skillfully crafted narratives reaffirm the seduction, and the impossibility, of the California dream.

Golden Gate: The Life and Times of America’s Greatest Bridge 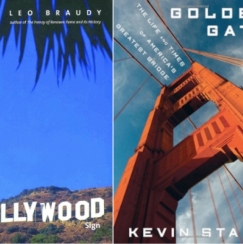