IN HER LECTURE “Being or Becoming the Stranger,” Toni Morrison defines othering as “alarm or false reverence” toward the other that denies “her personhood, the specific individuality we insist upon for ourselves.” The new novel by Noor Naga, If an Egyptian Cannot Speak English, contributes to this conversation about othering with its opening epigraph — a republished tweet from the Cairo-based writer Hana Gamal: “I am not what you think I am. You are what you think I am.” The tweet is fitting for Naga’s novel, which tells the story of love between an Egyptian and an Egyptian American. Winner of the Graywolf Press African Fiction Prize, the novel is set in post–Arab Spring Cairo, a setting that provides opportunity for the author to explore what it means to other and how difficult it is not to deny somebody their personhood, even and perhaps especially in an intercultural romantic relationship. In addition, the novel’s structure features alternating chapters narrated by the Egyptian, referred to as the “boy from Shobrakheit,” and the Egyptian American, who we find out at the end is herself named Noor.

Language difference is one of the key mechanisms in othering. And language is a key aspect of If an Egyptian, since the chapters relating to the “boy from Shobrakheit” are rendered in an English that represents his native Arabic, while Noor’s chapters are in an English that is her native language. Noor is a language teacher, and throughout her relationship with the “boy from Shobrakheit,” her language skills grow, as does her familiarity with Egypt — or, at least, Cairo. Language acquisition can undo the simplification othering establishes. Noor sees this process reflected in the Egyptian students in her English-language class at the British Council. At the end of each session, when the students can switch back to Arabic, they are relieved, while it is Noor who must now do the “humbling work” of translation. In Arabic, Noor is limited and reduced, less specific perhaps. But her efforts to improve her fluency make her more like those she has othered and thus make them less othered by her.

This work is humbling because it requires an admission of ignorance, requiring one to ask questions, to be curious and open. Each chapter of If an Egyptian begins with a question, similar to a catechism — for example: “How long does a newborn listen before it utters its first word?” Perhaps the humility of being a language learner works against any hegemonic impulses in Noor’s American character. It certainly affects the dynamic of her relationship with the “boy from Shobrakheit.”

When she first narrates their sexual encounters, Noor can’t help but use sentences from Arabic rather than English: “I eventually stripped and lay down on the kitchen tiles of my L-shaped apartment, commanding in my lilting, infantile Arabic: Take me from above.” The eroticism in this chapter is shaped by the difference between their languages, as if the “boy from Shobrakheit” is not adjusting his position but descending from the heavens. Of course, as Morrison pointed out in her lecture, such reverence is another form of othering. The question of whether Noor is othering the “boy from Shobrakheit” haunts her view of their relationship, as another question that heads a chapter emphasizes: “Is it racist to believe that being sexist makes you more Egyptian?” One effect of these question headings is to suggest a meta-level of narrative discourse relating to the difference between the cultures of Noor and the “boy from Shobrakheit.” In this way, Naga can explore questions about otherer and othered, about potential reversals of the process, about who is the hegemon and who the oppressed, and how that distinction changes based on the situation.

Noor is an American woman, a phrase with an adjective suggesting she is the hegemon but with a noun suggesting her oppression. Her immigrant father recognized the “marketability of the Orient in the Manhattan alternative health industry,” showing the connection between othering and Orientalism. “I keep saying I’m Egyptian and no one believes me,” Noor says. “I’m the other kind of other, someone come from abroad who could just as easily return there.” No matter what she wears, no matter what she says in Arabic, she’s constantly asked where she’s from. If she answers that she’s from Cairo, her interlocutor tells her, “Of course you are.” What keeps her from being Egyptian is the privilege of being able to change her setting, to be able to encounter the other and recognize the other yet never become the other.

In Egypt, Noor can only be a foreigner. In the chapters narrated by the “boy from Shobrakheit,” Naga criticizes the naïveté of Noor’s understanding of aspects of Egyptian identity involving religion and class. While Noor thinks young women who enter a café are discriminated against because of their hijabs (i.e., because they’re Muslims), the “boy from Shobrakheit” points out that the young women were easily identified as poor, and the café is a higher-class establishment.

While the “boy from Shobrakheit” may not ever be able to leave Egypt, a privilege he knows he lacks, in that setting, he can at times wield the upper hand over Noor. He is only the other from her American perspective, but in Egypt, he can be the otherer. When Noor describes him, she sometimes compares him with all the men in her life, which could also sound like a different form of othering: “I’ve dated enough to understand how I am used by men who reject themselves.” The relationship between the two protagonists allows Naga to explore othering through the lenses of sexuality and gender.

Noor ultimately gains the upper hand in this game of othering. The boy’s chapters reinforce his position as, ultimately, the object of her narration. These chapters are wild and fantastic in their language as if the “boy from Shobrakheit” is aware of how he is being othered, exoticized, and expresses himself accordingly: “One morning we were evicted like whores by a line of sniggering policemen, my grandmother wailing in her flowered house-galabeya…” Perhaps similar to Noor, the reader feels sympathy for the “boy from Shobrakheit” and the dramatic stories of his childhood. The boy’s chapters often have footnotes that explain terms used in his narrative, as if to remind the reader that his world is formed by Arabic. While Noor acquires this language, the reader does as well (in a much more limited way, of course). Does this growth make Noor, who is writing a memoir about her experiences with the “boy from Shobrakheit,” less of an Orientalist?

During one scene, the “boy from Shobrakheit” explains the language of truckers’ beeps to the reader. He wonders if Noor knows this language or if it only sounds like noise to her. Can more of such context-conscious translation work against the othering that Orientalism performs? Although If an Egyptian is written in English, its narrative often signifies events happening in the Arabic language. This duality is key to creating the story’s tension, which plays out across languages: “It is in Arabic that lovers murder each other with side tables, and it is in English that they theorize about what it is to be murdered by side tables.” The tension indicates a game played with higher stakes, a leveling between otherer and othered. Noor begins to notice that her Egyptian friends no longer find her naïveté charming. Egyptians she used to find exotic on the streets of Cairo become plainer, more familiar. As events become less like a vacation and more like everyday life, Noor recalls the social media shaming that was the catalyst for her travels to Egypt, a place where she can escape identity politics, and perhaps all these ideas of othering as well. This part reminds a reader of the epigraphic tweet.

If an Egyptian Cannot Speak English 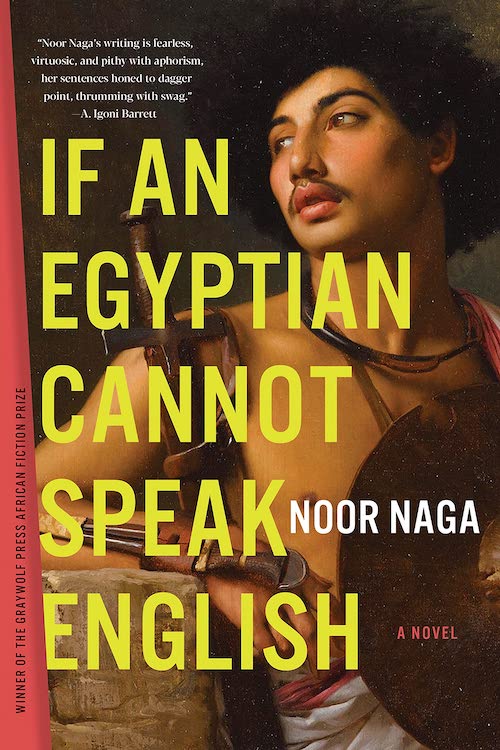