WHENEVER I PICK UP a noir novel, I try to get myself in the right state of mind, ready for bleak cynicism and uncomfortable moral ambiguity. I like to think, as I start on page one, that I’m braced for anything. Reading the Pizzofalcone Precinct series, by Maurizio de Giovanni, I quickly discovered that I can still be surprised. These books didn’t get to me with an extra dose of soul-sucking fatalism or some harrowing new breed of self-destructive protagonist. Instead, their emotional “gotcha!” came in the unexpected form of tenderness.

Tender noir? Is such a thing possible? Yes — and it adds a richness that many noir novels lack.

The Pizzofalcone Precinct series is de Giovanni’s second. His first, also published in translation by Europa Editions, takes place in 1930s Naples under Italy’s fascist regime and features Commissario Ricciardi, who possesses the unusual trait of being able to hear the last thoughts of those who have died. Despite its premise, this series is less about the supernatural than about Ricciardi’s “deep empathy with the dead,” as previously noted in LARB.

While the characters in de Giovanni’s new series, set in present-day Naples, are limited to their own thoughts, they too are afflicted with serious — sometimes crippling — bouts of empathy. It’s an unexpected communal quality, given the community. The series centers on a disgraced precinct where four crooked officers have been fired for running a drug-dealing ring. These rogues are succeeded not by exemplary replacements, but by “new bastards, stray dogs whose original precincts had been all too eager to get rid of them.”

In the inaugural book in the series, The Bastards of Pizzofalcone, the new bastards are on probation. If they don’t prove their worth, higher-ups will gladly shut down their station and dissolve it into the surrounding precincts. They pass their first test by solving the murder of the wife of an eminent notary. What is most striking about their achievement is that their success would not be possible without esprit de corps. Not only do the bastards work together willingly (if not always harmoniously, given their various bristly personalities), they give each other credit where credit is due. They are “one of those teams that no one would have bet on at the beginning of the season, but if you believed in them and you did, they would have paid off against ridiculous odds.” It’s a nice departure from the warmed-over lone wolf trope.

The follow-up book, Darkness for the Bastards of Pizzofalcone, pits the team against the disappearance of a 10-year-old boy. On a school field trip to a museum, young Dodo walks off with a woman, an act caught on a security camera. The woman’s face is obscured by the hood of her sweatshirt, but one thing is clear: Dodo goes with her willingly. Dodo is the grandson of a prominent local real estate developer, one of the wealthiest men in Naples, which makes this case not only high priority, but high profile. The bastards need to act fast. Otherwise, the case will be handed over to the city’s special investigative team.

Once again, the four new bastards combine their investigative talents with those of the precincts’ three additional members: two officers who survived the drug scandal purge and the commissario in charge of them all. This brings the grand total of main characters to seven, not counting the city. De Giovanni has credited Ed McBain’s 87th Precinct series as the inspiration for the Pizzofalcone books (while McBain credited Dragnet as his inspiration), and this Russian stacking doll of influences can be seen in the hyper-omniscient voice De Giovanni uses to give Naples a rich personality that frames his novels.

The story of Dodo’s kidnapping is told in first, second, and third person, and chapters not specifically devoted to the city, the main characters’ personal lives, numerous secondary characters, or the machinations of solving the crime revolve around specific subjects: heroes, darkness, and even the month of May. Then there are chapters — more poetry than prose — like the one rhythmic with the repeating phrase, “There are nights.” Imagine Fellini and Chandler collaborating on a Neapolitan remake of Our Town, and that begins to give you an idea of what you’re in for with Darkness for the Bastards of Pizzofalcone.

If this sounds confusing, that’s because, at times, it is. This confusion is exacerbated by de Giovanni’s use of first and last names in a way that can make it seem as if there are twice as many characters in a scene as there actually are. Because of this, I strongly advise reading the series in order, since the first book serves a character guide for the second. In the end, though, de Giovanni’s eclectic approach reinforces his insights into human nature in a way that justifies the amount of attention he demands.

From Lieutenant Giuseppe Lojacono, his reputation ruined after a mafioso’s testimony falsely incriminates him as an informant, to Commissario Gigi Palma, the precincts’ thoughtful, Barney Miller–like leader, each character is a small portrait of the struggle between being a good parent, spouse, friend, or colleague and being true to yourself. There is the middle-class, trigger-happy officer who hides her homosexuality from her family, and the precinct buffoon with a fake tan, who speaks like “the Italian actor who dubs Al Pacino” and spends his off-hours puzzled by unrequited love. After hitting his wife, the lieutenant with anger issues now trails her around the city trying to convince himself that he is not a bad man. The computer-whiz sergeant hates herself for how much she resents her mentally disabled son, and the widowed captain becomes so obsessed with his dead wife that he secretly investigates a spate of suicides, providing an interesting series through-line.

The bastards are all terrifically flawed individuals. But they do not fit into the domestic noir novel-HBO-Netflix Originals pattern, where the purpose often seems to be creating a character more damaged than any other character ever created before in the history of the world. As one officer notes, “They were all her type. All bad apples like her, perhaps, but authentic.” They actually take pleasure in their union as the Bastards of Pizzofalcone. “We should trademark the nickname,” says another. “It’s been years since I’ve had so much fun coming in to the office.”

The fun being referred to is the precinct camaraderie, and certainly not the kidnapping of Dodo, which they take seriously, not just because their jobs or even justice are at stake, but because — when it comes to victims — they can see shades of their own lives’ tragedies. They are haunted by Dodo, and the commissario’s emotions speak for them all. “His heart filled with mute sorrow for a child held prisoner who knew where and by who knew whom […] He’s so small, he’s only ten years old. Let us get there in time.”

Poor little Dodo, locked in a dark room, terrified as he clutches his Batman doll. “You know, Batman, I’ll whisper this in your ear and you keep it to yourself as a secret: When I go home, I want to be a little baby again. When I get home I want to hold tight my mamma.” And in another darkened room across the city, Dodo’s mother dreams, “I was lying next to him, stroking his hair […] I was singing him our song, the one that helps him get to sleep.”

These are the moments where de Giovanni excels. It’s noir standard to write about the depths of evil — and is there anything more evil than harming a child? — but while de Giovanni never wavers from a world where terrible people do terrible things, motivated by selfishness, greed, and loathing (for themselves, for others, for both), he illuminates the soft underbelly of fear and loss without being manipulative. He explores an imperfect and truthful compassion, and finds that fragile place inside the bastards that resists the heavy hand of fated suffering.

I would not call these books hopeful. That feels too frivolous for what de Giovanni pulls off. The bastards are jaded from all the bad that they have experienced and seen, but they are still able to believe — in love, in the bonds of family, in the kind of redemption that finds its definition in the possibility of something better. And if one can believe in redemption for one’s self, that makes it possible to believe in redemption for others as well.

There comes a point in the book when the reader realizes that while rescuing Dodo may not change the bastards’ circumstances — it won’t bring back a wife or repair a rift with an estranged child — it could have the potential to deliver a kind of earthly salvation. And so, as the treacheries of the kidnapping are revealed, we begin to dread how mercilessly Dodo’s fate will affect the tender bastards of Pizzofalcone.

Kim Fay is the author of The Map of Lost Memories.

Darkness for the Bastards of Pizzofalcone 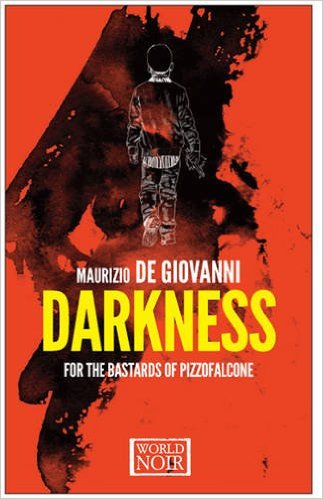