BORN IN SAN FRANCISCO in 1941, Robert Hass has long been regarded as the Orphic poet of California’s lush and rugged coastland. His first several books chronicle that region’s flora, fauna, and geology while limning key features of the American psyche — our wanderlust and avidity, habits of violence and capacity for wonder. In poems such as “A Story about the Body,” “Meditation at Lagunitas,” “Etymology,” and “My Mother’s Nipples,” Hass has addressed, with the seemliness of lyric, the baby boomers’ search for fulfillment — in art and erotic love; in science and psychotherapy; and in their own seasons of mating and molting.

Indeed, Hass’s poems have offered acute psychological portraits of relations between men and women as ideas about marriage, family, civic fealty, and libidinal appetite have undergone radical revision. For almost 50 years, his poems have celebrated the choices available to a prosperous, educated class in the late days of empire. He has situated the ache of human yearning, orphaned by religion and convention, as part of nature’s “unendurable beauty.”

Summer Snow is Hass’s first book of poems in a decade, following the collection The Apple Trees at Olema (2010); a book of essays, What Light Can Do (2012); and his magisterial study of poetic methods in A Little Book on Form (2017). It continues his lifelong exploration of the fiat of desire; the brutal beauty of the natural world; and song as a gnosis as profound as history or philosophy. In “The Poet at Nine,” he suggests that his attunement to sensual music began early, as a young boy ignoring the summons of nightfall.

Most gods begin with a soft tearing
In the mind, but some begin in the body.
He’s found a place to hide so perfect
That he has to struggle not to laugh
And give himself away. It’s the time
When children are called in, it’s cold.
He shivers, crouching. A few stars.
He listens to the crickets in the dusk.
Possibly it’s blood ringing in his ears.

The mating calls of summer crickets and the throb of a boy’s rebellious body are elided into one sound, one sensation. Similarly, in “Cymbeline,” Hass conflates the image of the sun’s ascent between two stones at Stonehenge to the human physique, arching in sex. The New Critics’ metaphor of the “world’s body” hinges both ways in Hass’s work: it is the trapdoor to uncanny epiphanies, our physiognomy conflated with that of the natural world.

His major themes — sensuality, language as epistemology, and narrative understanding as a substitute for Judeo-Christian rituals of confession and forgiveness — have been consistent since Field Guide appeared in 1973, the book Stanley Kunitz chose for the Yale Series of Younger Poets Prize. Hass’s poem “Three Old Men” recalls Kunitz’s advice on that occasion, which included the monition: “‘Talent is one thing,’ / […] ‘You need character for the long haul. / Nobody wants you to be a poet.’”

Summer Snow evinces the definition of that character, as well as a new restlessness. It is as if, having proven his mastery of the meditative lyric and its variations, Hass now wants to escape the constraints of the elegant structures he has helped to codify. A large collection at 176 pages, it contains several long prose poems, two translations from Anglo-Saxon, a rangy treatise titled “Notes on the Notion of a Boundless Poetics” dedicated to Lyn Hejinian, a coy psychobiography of Modernist poets, and poems of literary anecdote about (or informed by) Czesław Miłosz, Tomaž Šalamun, Xue Di, Eugenio Montale, C. S. Giscombe, and Ellen Douglas, among others.

Yet the most memorable poems in the book still reside in Hass’s bailiwick: the lyric mode, in its various moods. Poems such as the anniversary paean “To Be Accompanied by Flute and Zither” or the dramatic monologue “Los Angeles: An Analysis” showcase his dexterity with vernacular, an imagistic discipline borrowed from haiku, and an instinct for the flint of narrative.

Hass is also a master of the prose poem. In the first section of “Patches of Snow in July,” the poet experiences a moment of sublimity worthy of Wordsworth’s Prelude, one that catalyzes his descent into an underworld of untimely deaths — of friends and acquaintances from childhood, adolescence, young adulthood, and early middle age. This personal elegiac sequence gathers its force, however, from the prose meditation that precedes it. He gazes at the majestic Sierras, as vulnerable to the “untimeliness” of climate change as the poet is to their beauty:

In June there had been weeks of unseasonable cold and several days of snow in the Tahoe Sierra, so that city people were driving up to ski on the Fourth of July. Ten days later, the tips of the pines seemed to be on fire with the neon green of new growth, and along the Truckee River wildflowers had the raw look of early spring, as if they were astonished at themselves for having forced the dead earth. Coming into the valley, something about the way the grasses and wildflowers and trees climbed the mountains right up to treeline, as if they were a young orchestra hitting high notes, and the way the white patches of snow in the saddles of bare rock between the massive peaks glittered in the sun undid me. If that’s the right word. Undid. Woke up.

Startled by the careening seasons, the burst of wildflowers and evergreens, and the “saddles” of snow on bald rock, the poet introduces his theme of “out of season” losses to include a childhood friend with a hole in his heart, a college student from his lecture course, a suicide in his graduate school cohort, and the luminaries Jane Kenyon, Larry Levis, and Raymond Carver. Of these writers, Hass notes, “All of them suddenly become the work / they managed to get done.” Yet art that leaves some shape of the artist’s consciousness behind is a kind of afterlife, and in “Smoking in Heaven,” he imagines another, one with abundant sex and “decaffeinated time,” or a daily tempo lived without the urgency of mortality.

Almost 80 years of age, Hass is putting the planet of his imagination on the table, laying bare his influences and situating his abiding concerns in the wider cosmos of literary posterity. He seems eager, in fact, to make visible his process and procedures, not unlike the postmodern architects of the 1970s who aimed to make the materiality of their construction legible. In “The Archaeology of Plenty,” an arch ars poetica, the poet teases himself:

In this Sartre-esque cabaret, the narrator suffers from the surfeit and monotony of a settled life. Like the birds, he has only to open his “eye” (and “I”) and apply song against the pressure of reality. This jazzy playfulness segues into an epistolary address of two friends, a couple with children, who — he imagines — are freed from overthinking their lives by the “practical immanence” of family life. Here, Hass evokes the “family romance” of other peoples’ lives and domestic interiors: a reflex of benign envy as American as it is Freudian, and one seemingly linked to the nightmare of his mother’s alcoholism, which he obliquely alludes to in the beautiful poem “John Muir, a Dream, a Waterfall, a Mountain Ash.”

Hass’s forays into new territory and looser narrative structures are not always successful. When he strays too far from embodied experience, the poems fall flat. In the book’s third section, he considers terrorism, mass murder and gun laws, drone warfare, and the ontology of peace. Most of these poems neither fully arrive or depart. In “The Creech Notebook,” for instance, he describes protesting drone warfare at a US military base in Nevada. Yet his dinner at a French-Basque restaurant in a Bakersfield strip-mall, en route, is more evocative than his account of standing outside the military base from which pilots fly drones that attack distant Afghanistan. He admits: “11 A.M. Witness can be a little boring. / I have mostly been holding up my sign / For the cacti and the Joshua trees to read.”

Luckily, we have not needed Hass to be a desert prophet or proselytizer. As the Orpheus figure of his generation, one that struggled to know itself and justify its pleasures, he has had other work to do — naming desires that would otherwise remain inchoate and bewildering. 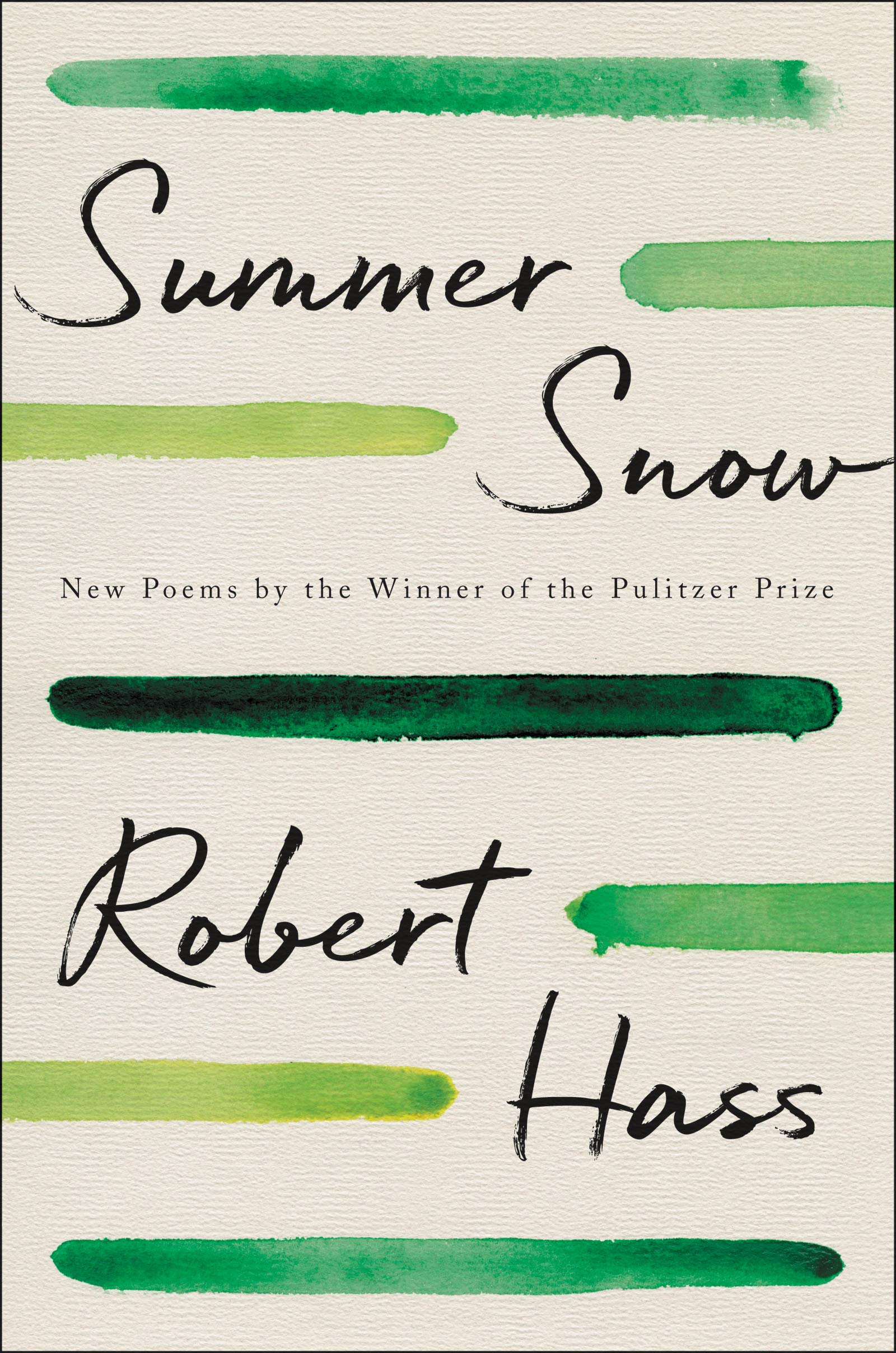