DEFINED BY THE PACIFIC OCEAN, Los Angeles, however, extends north to the Santa Monica mountains, east to the San Gabriel Mountains, and is riven with intervening canyons and valleys. Hiking is always but a short drive away. I live on the eastern end of the Los Angeles basin, where there are many trailheads in the foothills. Each day, and particularly on the weekends, dozens of cars park nearby. Urbanites in a variety of hues, builds, and states of preparedness arrive in droves. Some are geared up with sleek backpacks and walking poles, and others ready themselves to face the elements in flip-flops and their all-purpose protective sheath: cell phones. All come to experience nature.

Each week helicopters hover, swoop, and dip into these hills, as they do at this moment. At times the helicopters search late into the night, other times they begin their search with the morning light. After extended searches we’ve witnessed people being winched up, and we’ve gaped as they hung on. On a nearby trail an eight-year-old girl watched her father take a fatal misstep. It is clear that even in these gentle foothills — in the backyard of Los Angeles — there is a delicate line between adventure and calamity.

A four-day hiking trip into the even greater challenges of the Sierra Nevada is the setting of Nina Revoyr’s latest novel, Lost Canyon. Revoyr may be known best for her Edgar-nominated and Lambda Literary Award-winning novel Southland. More recently, her young adult novel, Wingshooters, was an O Magazine pick. Revoyr, born in Japan, current resident of Los Angeles, is the daughter of a Japanese mother and a Polish-American father.

Why does her heritage matter? Why does it bear mentioning? Recently, in these pages, Rachel Howzell Hall and Attica Locke discussed not seeing reflections of their adult selves in literature and the media; Steph Cha has mentioned that her community, well-embedded in the Los Angeles area, is a topic rarely explored; and elsewhere I have discussed the invisibility of my community, which was here well before statehood. Across media the predominate palette of choice is mind-numbingly, rage-generating monochromatic.

As if in response to these pervasive misrepresentations, Revoyr has an unapologetic agenda for exploring Southern California at the intersections of its complex diversity. While this story takes place in the Sierras, the mental landscape is Los Angeles. Her multiple-character novel truly brings us multiple perspectives representing urban Los Angeles.

What a pleasure it is seeing characters that live and breathe in the same textured universe that we do. We meet the organizer of the excursion: Tracy, hapa like the author, is a driven, sensation-seeking physical trainer. Her clients include Gwen, intent upon giving back to her community in Watts, despite the fact that the demographic has changed from black to brown; Oscar, a now struggling Highland Park realtor simultaneously suspicious of and responsible for gentrification (despising hipsters, not realizing he could qualify as a chipster); and Todd, the successful blonde lawyer, struggling with a collapsing marriage. Todd, in Oscar’s eyes, is “Westside sheltered” and displays a rather appalling amount of ignorance. By entering the minds of very different characters Revoyr conveys to the reader the tension that comes with the awareness of ethnicity, class, and privilege.

Along with these stressors is the flourish of an opening quote from Deliverance. The reader anticipates that this back-to-nature excursion is headed off the rails. Will it self-implode? Are the frictions a ticking time bomb? Will nature simply be nature: aloof and disinterested in the plight of the short lives of humans?

Revoyr increases the reader’s anxiety by taking her time in introducing us to three of the four main characters. Although Revoyr may perhaps at times be a bit too indulgent in backstories —an irrelevant anecdote of Gwen’s past, a reference to too many of Todd’s wealthy in-laws — she can trust that the reader has understood. It is through the multiple voices and disparate perspectives that she deepens the discord and reveals the antagonism of rubbing closely against people who are very unalike. At times their perspectives overlap, as in their anxiety about the hike ahead and their assessment of their driven leader, Tracy. At other times, we encounter the chasm between their experiences, the resentment and even anger towards each other. A simple encounter in a small country store displays how different life experiences inform the strikingly dissimilar responses to a shared event: Todd bonds over the Green Bay Packers, Gwen is reminded of the charm of country stores of her great aunt’s past, while Oscar sees racist menace.

Gwen’s story is especially compelling: her childhood lack of access or opportunity for exploring bleeds into the present. Despite successfully navigating the challenges of her urban environment, Gwen is worried that she is underprepared and lacking in skills. She is also hesitant about investing hard-earned dollars in more appropriate equipment. “Gwen was a city girl, born and bred — she knew chain-link fences and concrete better than rivers and trees.” When Tracy suggests she carry a backpack around the neighborhood for practice before the four-day hike, Gwen thinks, “She imagined the stares she’d get from neighbors. Back-packing had never been a part of her world. It was an activity for tree-hugging granola types with excess time and money. It definitely wasn’t anything that black people did — especially black women.”

(Gwen is particularly resonant for me, a city girl who was clad in nylon tights for her first visit to snow, who as an adult went camping to King’s Canyon with her newborn and upon meeting bear containers decided to sleep not in the tent but in the car with her fat bear-bait baby.)

As Revoyr moves from character to character, we marvel at her ability to channel, inhabit, and explore multiple perspectives with compassion and without judgment, while simultaneously raising our apprehension. For example, as Todd and Oscar begin to inwardly fret about Gwen’s preparedness, the reader also begins to worry, first about Gwen as a weak link, and later about Gwen’s survival.

Although the novel is centered on the Sierras, while navigating the varied topography and communities of Los Angeles, Revoyr also evokes the beauty embedded in urban living. Early on Oscar sees: “It was a cool night, but clear, early summer in LA; the head and taillights of the cars on the 134 looked like stars moving sideways across the sky.” And later, “Even from where they stood, they could see the folds of small canyons, the lines of a trail, the antennas on top of Mount Wilson. A few more clouds had drifted in over the range, and it was dappled now in shadow and light.”

We wait for the first fault lines and fractures to reveal themselves, and when they do the conflicts explode and continue to escalate until the resolution. The group encounters two separate villains of a turf war, Mexican nationals and white supremacists; the novel turns into a delectable combo cup of multiple pressures and threats. Facing crises forces the individuals to interrogate themselves on their values, the worth of their lives, and their contributions to the lives of others. As they confront themselves in the Sierra, will they turn on each other? Who will thrive? Who will find those inner resources, buried deep? Who will survive? If they survive, will they change? Wherever the reader places her bet, she may end up being surprised.

Désirée Zamorano is a California-based short story writer, novelist, and playwright. She is the author of the novels Modern Cons, Human Cargo, and, most recently, The Amado Women. 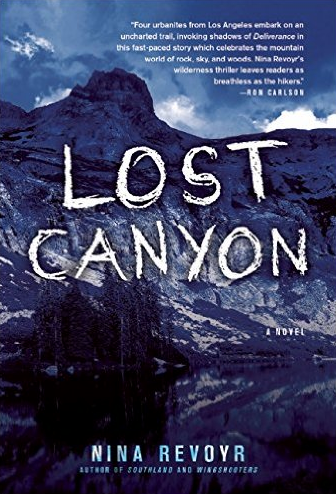