1. Aoife O’Donovan, “Nebraska,” from In the Magic Hour Solo Sessions (Yep Roc, 2019). There is fun and freedom in the work that in the last years Aoife O’Donovan has done with I’m With Her — her as in Hillary. But there’s a strain in her singing that can dive much deeper, into a world where good intentions are meaningless and reckoning is waiting around the next corner like a bum with a paper cup. This comes out only in folk songs that no matter their provenance feel as if they’ve always been present, that seem to carry dozens of decades and hundreds of singers before her. Without that there’s something missing: you’re not hearing all O’Donovan can bring into the world. But it’s all there when she takes up this song. As exposed in a vacuum as Bruce Springsteen was when he made the song, she lets you hear how meticulously his first-person account of Charlie Starkweather’s death rampage was crafted to follow the structure of a traditional murder ballad — or maybe it’s her voice, the way it hovers over the details in the story, that’s rewriting the song that way. “You want to know why I did what I did” — as she curls the line, she seems to know exactly why, and no, I didn’t want to know.

2. Shadow Kingdom: The Early Songs of Bob Dylan, directed by Alma Har’el (veeps. July 18–25). Set in a nightclub drifting somewhere between Deadwood in 1876 and Harlem in 1953, touching down occasionally on the limbo of a floating checkerboard floor, an old man in flashy clothes raises the specter of Tony Bennett or Frank Sinatra singing the likes of “Queen Jane Approximately” and “Tombstone Blues.” Your first impression might be that there is more cigarette smoke in this 50-minute film than in all of Gloria Grahame’s movies combined.

3. Deafheaven, “Glint,” from Ten Years Gone (Sargent House). Halfway through this retrospective from the San Francisco metal band that in its best moments can make Metallica sound too good — with their music so definitive of its form it’s one step from formulaic — is this 11-minute-20-second piece from 2018. It can sweep you up in an instant: for its ambition, its refusal to quit — there are half a dozen false endings, each one producing a flood of relief when it swims through a hole in the crescendo to the next movement — for the lyrical swirl that seems to have the singer tearing his throat out for some greater good.

4. Rosanne Cash with John Leventhal, “Crawl into the Promised Land” / “The Killing Fields” (Blue Note 45). On the surface is Cash’s ongoing project of finding the words and melodies to give voice to America’s worst legacies, to accept the idea of inheritable sin, and to affirm social justice. But you don’t have to hear any of that, not right away. The first thing you hear is Cash’s smooth ride over the Southern Gothic cadences from John Leventhal’s guitar, cadences that promise you’ll find out who died by the end of the first verse — and to hear what’s going on you don’t have to listen to the words. Because beneath this surface music a tone of voice that itself communicates Cash’s sense of sin and legacy, and that tone of voice is familiar, because Cash has tuned it throughout her performing life. When you are in the room of that voice, you know something is at stake, that something is unsettled. And so it is the tone of voice that leads you to listen for the rest of the story.

5. Shadow Kingdom: The Early Songs of Bob Dylan. The old singer stands facing the audience, on his right Billie Holiday, on his left Mildred Bailey. Stonefaced, Holiday brushes the man’s shoulder like Obama dusting his. With a Mae West come-on, Bailey seems to be beckoning the audience with an invisible finger without blinking an eye.

6. Jack Ohman, “GOP Uncritical Race Theory,” The Sacramento Bee (June 14). An editorial comic strip covering American history from slavery in the first panel to Martin Luther King Jr.’s speech at the March on Washington in the last. Panel two, on secession and the Confederacy: “Southern States Temporarily Leave to Form S.E.C. and NASCAR…”

7. Radio Diaries, “The Gospel Ranger: The Unlikely Musical Legacy of Brother Claude Ely,” NPR (July 16). The Pentecostal preacher was born in Puckett’s Creek, Virginia, in 1922; when he was 12, suffering from tuberculosis and told he would not live, he wrote “Ain’t No Grave (Gonna Hold This Body Down),” which has since been performed by those hundreds of people that appear like ghosts in Aoife O’Donovan’s music, including Sister Rosetta Tharpe, Johnny Cash, Llewyn Davis, and maybe most luminously by O’Donovan herself. This show, narrated by Ely’s great-nephew Macel Ely, brings intimacy and weight to the story, so that, at the end, when in 1978, after Ely finished his sermon in his church in Kentucky, moved to the organ, and, in a tape made that day, you hear him begin the hymn “Where Could I Go But to the Lord” and then fall off his bench and hit the floor with a terrible thud, dead of a heart attack in the middle of the song, it’s a shock: a shock because it is a violation. This shouldn’t have been taped. We have no right to hear this. This was between the preacher and his God and the people who were there to witness. Listening, I felt like a trespasser, and privileged to hear what they heard.

8. Shadow Kingdom: The Early Songs of Bob Dylan. Who knew that “I’ll Be Your Baby Tonight” was really a roadhouse stomp like “Summer Days,” with the singer on a table proposing a toast to the king?

9. Trackdown, “The End of the World,” CBS, May 9, 1958 (YouTube). Starring Robert Culp as Texas Ranger Hoby Gilman, who, only to take him down in the end, pretends to make common cause with a con man, one Walter Trump, who preaches that members of a small town will perish along with the rest of the world unless they come up with the money to build a wall to ward off the great catastrophe. Probably not by coincidence, right down to the thin moustache and bald head, Walter Trump is a dead ringer for Fred Trump, who in the 1950s was under investigation for swindling millions of dollars out of the Federal Housing Authority. In Trackdown, one can read in The Complete Directory to Prime Time Network TV Shows, “many of the stories told in the series were adapted from cases in the files of the Texas Rangers and it was for that reason that the show had the official approval of the State of Texas and the Rangers.” But someone was reading the papers — and, like Walter Trump, if with more accuracy, predicting the future.

10. Shadow Kingdom: The Early Songs of Bob Dylan. Among the few people in the bar where the singer and his COVID-masked band are playing — no one in the audience has heard of it — is a lithe young black man. At one point, he’s dancing alone, quietly, softly, as if he’s hearing his own music. Fifteen people in the film are credited as “Club Members”; unless he’s CJ Streeter II, who does not appear on Google, he’s Robert Johnson.

Thanks to Doug Kroll.

Pieces by Greil Marcus on Music Makers of the Blue Ridge and Bruce Conner’s The White Rose open and close Mapping the Rocumentary edited by Gunnar Iverson and Scott Mackenzie (Edinburg University Press). 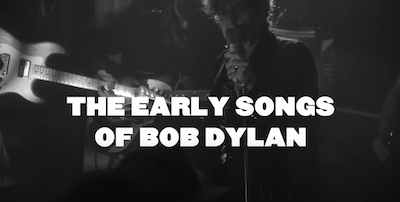