SINCE ITS FIRST APPEARANCE in 2012, virtue-signaling has become a trendy phrase to denote an old thing: saying something calculated to win admiration. Naked self-aggrandizement, of course, won’t work — at least not to traditionalists. To be effective, it needs to be cloaked. Then again, although blatant braggadocio has been customarily verboten, recent years have shown us that it can work with a large segment of society.

Much depends on whether you are conservative or progressive. Not until the 11th edition of Black’s Law Dictionary, published in 2019, did I decide, as its chief editor, to define conservative and progressive. Yet the ideas denoted by these terms permeate law and society. Conservative I defined this way: “Predisposed to traditional attitudes, beliefs, and teachings; favoring established traditions, social stability, and gradual developments as opposed to abrupt changes.” And progressive this way: “Favoring new or modern ideas and methods, esp. in politics and education; specif., supporting political change and social improvement esp. through governmental action.”

So if you’re at a meeting of conservatives, virtue-signaling might mean aligning yourself with the Founders, the original meaning of the Constitution, and time-honored views of the meaning of marriage; as well as dismissing newfangled ideas about transgender rights. If you’re at a meeting of progressives, virtue-signaling might mean the embrace of bold new views toward transgender rights, put-downs of those who oppose same-sex marriage, and maybe even mockery of those who would lionize the Founders, many of whom were slaveholders.

It might also mean, in liberal circles, the declaration that you reject the old idea that there are only boys and girls, men and women in this world, and that anything else is a freak of nature. That’s the binary view of humanity. The progressive idea is a nonbinary view that doesn’t exclude the small segment of society that conservatives think of as having a curable “gender dysphoria.” A more extreme nonbinary view might be that these are the people, more likely, who should be lionized.

In 2018, I found myself at a New York dinner party in conversation with two graduate students in their 20s. When the students found out that I’m a lexicographer and grammarian, the subject shifted to pronouns. They knew some people who preferred ze (pronounced /zhee/) and thon (pronounced with a hard th) and others who went by their, and they told me something that came as a surprise at the time. Among their peers, it was common to introduce yourself by announcing your pronouns: “Hi, I’m Beatrice. Xe, xer [pronounced /zhee/ and /zhur/, I think].” “Hi, I’m Arnold. She, her.” “Hi, I’m Leslie. They, them.”

They wanted to know what I thought — or so they said. Believing myself to be rather enlightened and open-minded, I said, “Experimental pronouns have been tried without success for a very long time. I think the singular they will win out ultimately. It’ll be interesting to see how the language sorts things out.”

Little did I know I’d said something insensitive and incendiary. “No! It’s not for the language to work out! We’re talking about people. Each individual gets to choose what xer pronouns are!”

Instead of excusing myself, as I perhaps should have, I pushed back: “But today I gave a lecture to a group of 80 people and met perhaps 20 of them. I shook their hands. Surely I wouldn’t be expected to remember each person’s pronouns.”

“Well that’s precisely what everyone’s going to have to do!” And with that the conversation came to an abrupt end.

One must tread lightly around this subject, unless one is Dennis Baron, the author of What’s Your Pronoun?: Beyond He and She (2020). Baron is a linguist who has long been fascinated with grammar and gender. In fact, one of his first books on the subject was the 1986 Grammar and Gender. He soldiers on in his new book, announcing: “Although I try to use terminology that is neutral, when quoting both historical and contemporary sources it has sometimes been necessary to include words and ideas that readers may find derogatory or insulting.” This seems effective to defuse objections, but who knows?

What’s Your Pronoun? is a valuable contribution to the field. Baron explains the age-old problem of the missing third-person singular epicene pronoun; the politics of the generic masculine pronoun; the various coined words that failed during the 19th and 20th centuries; and the rise of the singular they (which is actually centuries older than many might think — even if it has always had only a shadowy existence).

Take the simple declarative sentence, “Everyone forgets ___ passwords.” There are eight options for the blank: his, their, his or her, her, its, everyone’s, one’s, and thons (etc.). Each possibility has its own history, and each is wrong in its own way. Baron reasons us through each one, with historical explanations.

Extreme linguistic conservatives insist that he includes she — an idea first propounded, interestingly enough, by a female grammarian, Ann Fisher, in the mid-1700s. In November 2020, Joseph Epstein reiterated this conservative view in the pages of National Review, shortly before he attracted much greater notoriety for insisting that Jill Biden shouldn’t use the prefix “Dr.” before her name. “Nobody should use ‘Dr.’ before his name except a physician,” Epstein might have said, “and Jill Biden should know it.” (Okay, he didn’t quite use those words.) Well, I disagree on both counts: the generic masculine has well-known problems, and earned doctorates (apart from juris doctors) are entitled to their title.

In response to Epstein’s point about the generic he/him, the linguist Geoffrey Pullum has written to me about the ludicrousness of many constructions: “Many grammarians fail to notice the relevance of cases where it is made explicit that the reference might be to a woman: expressions like a man or woman who enjoys his job, or if your father or your mother should break his hip.” If he were really gender-neutral, you’d expect to encounter instances of a boy or girl who behaves himself. Yet phraseology of this kind never occurs in English for the very reason that he isn’t really gender-neutral at all.

But this problem of generic references is really pretty passé. Indefinite pronouns are ubiquitously construed with they and their in speech and informal writing. Everybody thinks they know what they’re doing.

What’s new isn’t the generic pronoun but the referential pronoun: the one that refers to a known person (Bill, John, Krys, or Emily). People are deciding for themselves how they want to be referred to behind their backs — in the third person. If you were addressing them directly, of course, you’d simply use you and your. A social movement is behind the idea that people get to decide how references to them should sound when they’re absent.

To symbolize that you’re part of this progressive movement, your emails include in your signature block a line declaring your preferred pronouns. It’s a kind of virtue-signaling — a declaration of solidarity with transgender rights and post-postmodernism. To conservatives, it might be a kind of vice-signaling — a symbol of craven faddishness.

What will it look like in the long term? Nobody knows the future of their address blocks. (His address blocks?) A decade from now, it might be said, “Oh, yes, that must be from the early 2020s. Everybody was doing that back then.” Or it might be that by then almost everybody does it, so that it’s hardly noticeable except to the most reactionary people. So much depends on the success or failure of the movement.

For now, pronoun declarations are both novel and blatant — which can be a good thing or a bad thing, depending on whether you’re socially progressive or socially conservative. As in almost every other segment of American life, society is fractured. What does Baron say? In answer to the query in his title (What’s Your Pronoun?), Baron concludes: “[N]obody answers, ‘My pronoun is actually a phrase, he or she.’ The answer will be, ‘My pronoun is she,’ or they, or he, or zie, or one of the many other invented pronouns.”

What’s heartening in all this, for a grammarian, is that people are talking once again about parts of speech. Or at least about one part of speech, the pronoun. But can they remember the others? For example, what’s your interjection?

Bryan A. Garner’s newest book is Taming the Tongue in the Heyday of English Grammar (1711–1851) (Grolier Club, 2021), in which he shows the wild variability among English-language grammarians in tallying the parts of speech (from 2 to 33). He is the author of Garner’s Modern English Usage (4th ed., Oxford, 2016).

Beyond He and She 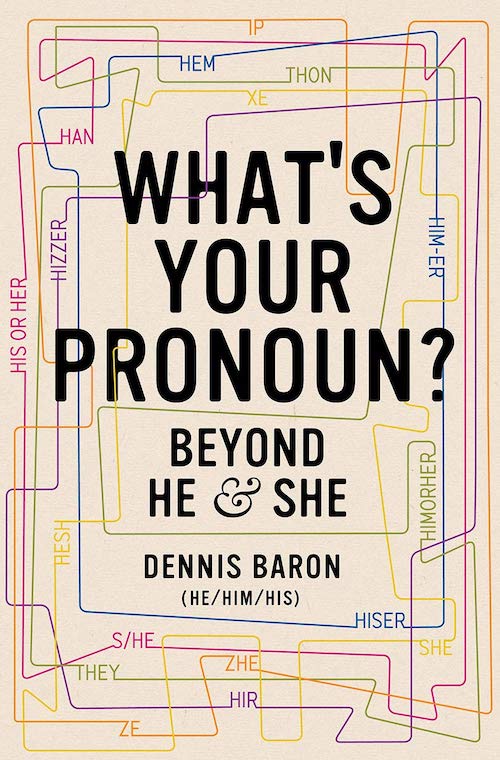