WELL BEFORE the end of the Merkel era, Kati Marton drew up her engaging portrait of the four-term chancellor. It was published a month after the September 26, 2021, German federal elections, which were a first-stab popular verdict on Angela Merkel’s 16 years in office — or a judgment on those vying to fill her huge shoes. One wonders if future historiography will confirm or discard Marton’s wholly sympathetic assessment of Merkel. Perhaps it will do both.

Merkel’s personal integrity is beyond doubt. She is impatient with ill-prepared and incurious politicians, even privately disdainful — she criticizes no one in public — of male chauvinist autocrats: Donald Trump, Vladimir Putin, Xi Jinping, Narendra Modi, Recep Tayyip Erdoğan, Viktor Orbán, e tutti quanti. She is always on time; Putin, in contrast, to demonstrate importance, always comes late. Respecting strongmen but winning against them is part of Merkel’s ego.

Despite her unquestioned virtues, Merkel’s style of governance was fundamentally reactive, balancing competing interests and unguided by a larger vision or philosophy. Merkeln became an unflattering neologism in the German language, connoting a style of deliberate vacillation, ignoring issues and muddling through. This worked well enough. The Eurozone held together. European Union unity stayed intact without a showdown with the authoritarians in Poland and Hungary. Germany kept its trade interests isolated from Russian aggression and Chinese human rights violations.

Kati Marton’s new biography, The Chancellor: The Remarkable Odyssey of Angela Merkel, “sets out to answer how this pastor’s daughter, this outsider, became the most powerful woman in the world.” It is a riveting story, adroitly told, full of engrossing anecdotes and rich details, derived not from conversations with Merkel herself but pieced together from published sources as well as discussions with friends and others in her orbit. That Merkel would not meet with a well-connected, sympathetic, and prestigious biographer offers an important clue to Merkel’s personality: absent vanity, uncompromising integrity, and the Lutheran virtues of humility and simplicity. It is the absence of charisma that makes her charismatic.

Extraordinarily for a 20th-century politician, there have never been leaks nor even a hint of scandal involving Merkel or her inner circle. No tell-all book by a disgruntled former staffer has appeared. Merkel’s disinterest in spinning a story, in presenting herself in a bright light, or in putting down adversaries is singular. She is not on social media and, to deflect attention from her person, wears a uniform, namely a jewel-colored jacket, black pants, and flat shoes. Merkel’s instinct to depersonalize her leadership, to be self-confident but modest, and to get things done quietly makes hubris and theatrics appear as male weaknesses. A sharp line separates Merkel’s official and private life. Even her closest staff — mainly women, some of whom she has worked with for decades — do not call her “Angela,” nor have they been to her modest, rent-controlled apartment opposite the Pergamon Museum in the center of Berlin.

Merkel was born in West Germany in 1954 but grew up in East Germany, where her Lutheran pastor father, shortly after Angela’s birth, was sent to minister among the communist infidels. Although an A student, having a bourgeois and religious family meant the young Angela was always treated with suspicion, which compelled her to be better than everyone else. And she was, if socially awkward. At school parties, she was “always the girl who eats the peanuts and doesn’t dance” — a member of the Club der Ungeküssten (Club of the Unkissed), as it were, with the pointed acronym CDU, like the political party she would lead for almost two decades.

Merkel’s father, Horst Kasner, who was born Kázmierczak to a Polish father in Berlin, was a “red” pastor, believing that Christianity and communism had the same roots, namely faith in the fundamental goodness of people and the bright future for humanity. A dyed-in-the-wool anti-capitalist, he never was a dissident in the communist East. His mission was a church for not against socialism. Even after the Soviet Union and its emaciated Eastern European satellites imploded, he opposed the unification of Germany. Merkel’s mother, Herlind, was a member of the Social Democratic Party and never cast a vote for her daughter. She died in 2019 at age 90.

At 23, Angela married Ulrich Merkel, a fellow scientist, whom she divorced amicably a few years later. “‘She took the washing machine; I kept the furniture,’ he recalled.” She also kept his name. After the wall fell — the momentous evening of November 9, 1989, spent in the sauna, as most Thursdays — Merkel decided to get involved politically. Choosing a center-right party, the Christlich Demokratische Union (CDU), “may have been another way of declaring her independence from her socialist father,” Marton ventures.

It was a propitious choice. The male-dominated and self-satisfied CDU, which had governed the Federal Republic for 28 of 41 years, had a spot for a young Eastern female scientist with neither political experience nor a personal network. Chancellor Helmut Kohl, who patronizingly called her his Mädchen (girl), brought her into his government of the newly united Federal Republic of Germany as minister for women and youth — two subjects she did not care about at all — to “fill a ‘soft’ Cabinet position with an East German woman.” But Merkel was determined and confident that she could succeed, even though, as she confided in then–prime minister of the United Kingdom Tony Blair, “I have the following problems: I am a woman, I have no charisma, and I’m not good at communicating.” And succeed she did. In 1994, she became environment minister and presided a year later over the first Conference of the Parties Meeting of the United Nations Framework Convention on Climate Change, which, 20 years later, resulted in the Paris Agreement. Her seriousness, expertise, patience, and persistence won over the skeptical United States and other delegations that were originally unimpressed by her dowdy appearance.

Not the first time. Merkel has made her career by being underestimated. In 1998, she ruthlessly disposed of Kohl when he was enmeshed in a scandal of illegal campaign donations to the CDU. Being an outsider — a female Eastern physicist in a party of male Western lawyers — turned from a liability into a strength. In November 2005, at age 51, she became the youngest and first female chancellor of the Federal Republic, winning the office with more votes in the Bundestag than any of her predecessors. Since then, Merkel has headed four coalition governments and managed that, whether her partners were the center-left social democrats or the center-right liberals, successes accrued to her and failures to her hapless junior partners. The media, both national and international, were mostly kind to her, if not hagiographic, even though her long tenure included multiple crises:

• The Georgia-Russia conflict of 2008, which reopened the East-West wounds

• The United States’s financial meltdown of 2008, which infected the world economy

• Greece’s near-bankruptcy shortly thereafter, which threatened to break up the European Union

Kati Marton’s The Chancellor: The Remarkable Odyssey of Angela Merkel does not deal head-on with what will surely come to be seen as Merkel’s crushing failure. As a physicist, she clearly understands climate change, but she offered only ringing (but hollow) words and policies so tepid that even the conservative Constitutional Court rejected them as insufficient. She never had a plan, which, in fairness, she also never pretended to have. Neither a revolutionary nor even a reformer, it was not her thing to translate lofty goals into policy and ensure that it would stick by persuading the public and marshaling political support. Merkel promised decent and competent management, which is rather less than, as Marton quotes her, “thinking things through, starting at the end — from the desired outcome, and working backward.”

Merkel studiously followed polling data and had a cautious sense of what was doable, yet certainly never an appetite to push the envelope. The chancellor must fervently wish to have stepped down a year ago — or earlier. It would have spared her the depressing last months in office and the searing revelation that respectable crisis management is a poor substitute for inspired crisis prevention.

Franz Baumann is a former United Nations assistant secretary-general and currently a visiting professor at New York University, focusing on the governance of climate change.

The Chancellor: The Remarkable Odyssey of Angela Merkel 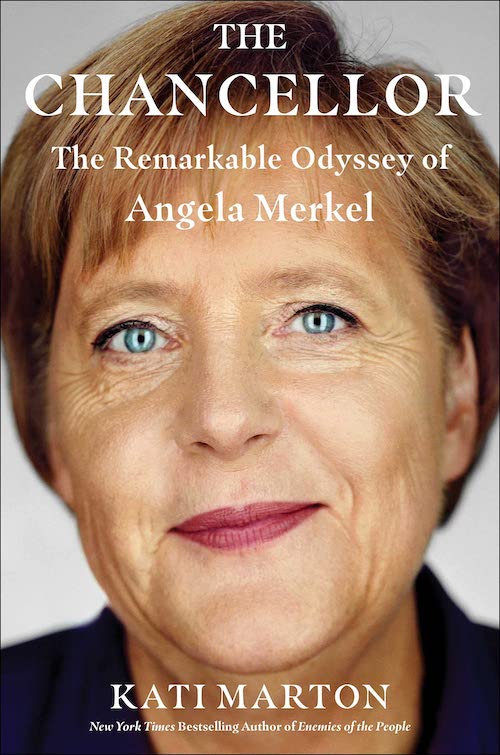