Find all the interviews in the All the Poets series here.

THE AUSTRALIAN singer-songwriter Courtney Barnett has, in record time, become one of the best respected figures in indie rock, adopting a style reminiscent of Liz Phair and other ’90s figures and updating it for the 21st century. Her verbal wit, deadpan delivery, and odd song structures were on clear display in buzzed-about singles like “Avant Gardener,” and she reached a broader audience with her and Kurt Vile’s duo LP Lotta Sea Lice and its alt-radio hit “Over Everything.” She’s also played on the albums and tours of her girlfriend, Jen Cloher.

Barnett plays the Pico Union Project on May 10, and her next LP, Tell Me How You Really Feel, comes out on May 18.

She spoke by phone from the warehouse of Milk! Records, a label she and Cloher run in Melbourne, Australia.

SCOTT TIMBERG: So how important was reading to you as a kid, and what sorts of stuff interested you?

COURTNEY BARNETT: When I was a kid, I went to the library every day after school, because I had to wait to get picked up by my mom; she worked in the middle of the city and she’d come home late. I was such a big reader.

A way to keep you off the streets?

Yeah — but I actually really liked it. I think we came to the point where I could have gotten the bus home by myself, or whatever. But I actually liked going there and hanging out. I’d always get out way more books than I could read, and they’d end up on a pile at home. I’d read two of them, extend them, extend them. I read a lot.

This is a public library in a suburb outside Sydney?

Yeah, exactly — they seemed to have a good selection.

What kind of stuff were you reading — fiction? Folktales? History?

I read a lot of fiction. When I was really young I read all the Paul Jennings and Roald Dahl books — all those kinds of books. I would just get obsessed with weird things — I’d get obsessed with the World Wars or something and pore over all these war books. And how-to books. When I got into music I’d just go to the music section and read up on music history. Then I probably started reading music bios. As a kid I was pretty sprawled out.

What kind of music was interesting to you? You were a kid in the ’90s. Punk was in the distance, the Beatles many decades behind.

I read every book I could find on Nirvana or Kurt Cobain, and Jimi Hendrix and classic rock bible books, like the history of rock and roll and Chuck Berry. The history of the blues, that sort of stuff.

It really took you away to another little world. And it was very visual. And a bit cheeky. And a bit naughty — very clever in the way the stories were about the children against the adults; I didn’t really figure that out till a bit later, but it got you on their side. They were quick to read, but exciting stories.

Jennings is Australian, not as well known here. What did you respond to in his books?

He wrote short stories, mostly — something quirky and strange would always happen. And kind of unexpected. Each story was this weird kind of … It was never normal, and I think it was exciting for that reason — it was a little bit supernatural and strange.

Did you ever get into science fiction and fantasy as a teenager?

I don’t think I did. My brother got onto that stuff — he read Dune. I liked books like The Day of the Triffids and To Kill a Mockingbird; that’s not science fiction.

If you were an American kid, you’d have read a lot of Judy Blume — did that stuff come into the reading of Australian girls.

No … I remember the girls in my school with — was it The Baby-Sitters Club? I never read that. It seemed like I wouldn’t like it.

I can’t quite imagine that hitting you, but who knows? That’s kind of a cleaned-up, white-bread sorta thing. You must have started writing songs as a teenager. Do you think the books and language you were engaging with went into that in a direct way? My guess is that some people write songs because they like melodies, and others because they like words, putting phrases together. How did it add up for you when you were starting out?

When I started playing guitar, at 10 or 12, I was definitely interested in the marriage of the two things. And I loved playing guitar, but when I started writing words … At some point we started learning poetry in school, and Shakespeare, that’s a different level from novels. I definitely started writing more poetry than songs. They’re quite close, they can bleed into each other. But I was always interested in the words, and saying something meaningful was the purpose.

What poetry were you reading in school? British stuff?

Definitely Australian poets, classic Australiana like Dorothea Mackellar, classic bush poetry. Mackellar’s “I love a sunburnt country,” Banjo Paterson — all that sort of stuff. I don’t think I ever got too deep into it.

Did you respond to poetry enough to pursue it yourself, find things you really liked?

Yeah, I remember sinking into the poetry section of the library. Now I can’t remember what I was into. But I loved the idea of writing, more than being a musician.

What did you like about writing poetry as a kid? Were these rhyming, free?

I think the simplicity of it. When we did creative writing exercises and writing big, long stories, I liked that. But I liked the simplicity of poetry, or saying a lot with less; I found that challenging and fun. And I was probably a big rhymer. And that ended up turning into lyrics, I guess. And melody and rhythm comes with it and ties it all together.

And I remember being amazed at how many layers of meaning you could get into one sentence: I think that’s what interested me. You know how you had stories with scenes, some levels of metaphor or whatever. But poetry … I liked the mystery of it. You could hide all these layers of meaning in it. That’s something I’ve always carried with me.

At some point, nobody was telling you what to read, your mom wasn’t dropping you off at the library. Where did you go next?

At a certain point, I got a bit lazy. In my late teens I went to art school, so the reading I was doing was art history and art theory. Which I did find really interesting, but I didn’t read many novels then. I loved discovering all of that stuff.

A lot of the art history amazed me. A lot about the gaze, and the frame. I remember doing a whole study of the frame once, which I found kind of amazing — especially what goes on outside the frame. Which I would have never considered unless it had come up in class. Surrealism. When I started studying surrealism and — I can never say it correctly, Automatism — I started learning about automatic writing and stream-of-consciousness writing.

I didn’t end up becoming an artist but it ended up opening my eyes to all this other stuff, this whole other stuff, and fed into my writing and my songwriting.

So many rock musicians went to art school. John Lennon, Bryan Ferry. A lot of the ideas in Roxy Music came from Richard Hamilton, with whom Ferry studied, and Pop Art. Do you have a sense of how art criticism shaped your songwriting? Did it give you a new way of seeing the world?

Yeah, it definitely did. I don’t know precisely how. It opened my brain up to different ideas, combining the visual and the narrative — flexing the descriptive muscle, seeing how far you could take it.

I also love Mary Oliver’s poetry. Jen loves her, too. I think it’s that very tasteful connection to nature.

One thing I see in your songwriting is wordplay: I think the first song of yours I ever heard was “Avant Gardener.” Do you tend to like writers who are playful with language?

Yeah, I do. I’ve always been drawn to it. Especially when it makes you stop, step back, and think. I suppose there are all kinds of writing tools that, if you overuse them, can get cheesy. But I’m always trying to cram a million meanings into everything. And I love making up words, making up your own meanings for things.

Do you have a favorite writer to whom you go back a lot?

I think I’m so sporadic with my reading. Right now I’m sort of obsessing over Maya Angelou — someone I never knew about as a kid, so it’s kind of a revelation. I listened to a bunch of interviews, and then I went and read I Know Why the Caged Bird Sings. I got the audiobook because I was on tour. I loved the audiobook, and loved her reading it to me. I don’t know how to explain it, but I really connected with it.

Scott Timberg is the editor of The Misread City: New Literary Los Angeles and author of Culture Crash: The Killing of the Creative Class. 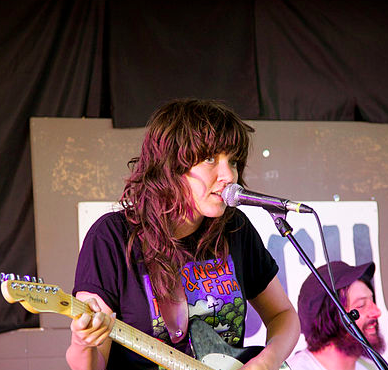 All the Poets (Musicians on Writing): Courtney Barnett