YOU CAN’T READ Jessica Gross’s Hysteria and not be reminded of Fleabag, played by Phoebe Waller-Bridge in her eponymously titled hit series. First off, there’s Gross’s protagonist, whose name we also never learn, and who also narrates her story, in ferocious first person, from beginning to end. But an entirely original plot notwithstanding, there’s more still to compare — enough to propel me to email Jessica to ask if she’d watched the show (she had, of course; she answered that she’d been “obsessed”), and how she felt about the association. She wrote back to say she was not only flattered, but grateful: “I have to imagine Fleabag’s popularity was part of what made space in our culture for books like mine!” By which I’m guessing she means books that feature smart young women who are frankly sexually voracious — looking for love (in mostly wrong places), but not from us readers (she’ll say anything, this girl, not to shock or entice — just because she can); women who compel us to get up exhilaratingly and embarrassingly close. In Gross’s novel, this character’s compulsion to bare all winds up winning us over: it’s her honesty, of course; her bracing wit; her insatiable desire (to be desired) — all those are enough to seduce her reader, never mind that she herself can’t get enough.

I’m saying Hysteria — like Fleabag, like Michaela Coel’s I May Destroy You (in which yet another brilliant young woman is forced to confront her urge to self-destruct) — is a wild ride. But if the narrator is out of control, not so the author. Gross’s debut is confident, sure-handed, fast-paced, entertaining — and also profound. It’s giving not much away to say that this particular young woman, the daughter of Upper East Side therapists in Manhattan, runs into a bartender who looks familiar; who, wouldn’t you know, turns out to be Sigmund Freud. So convinced is our heroine — so convincing, too — that the reader can’t be sure: Where is Gross taking us? Is this genre fiction or what? I won’t say more, except that I couldn’t put the book down. But this addiction story is not only addictive, it’s also darkly, hilariously, authentically graphic. So, of course, I got in touch again to ask about that.

DINAH LENNEY: Writing about sex, can we start there? It isn’t easy, right? Or is it? Who else does it well?

JESSICA GROSS: I have to say, I adore writing about sex — it’s so much fun. But I think it must be hard to write about sex between people who actually care for each other in a way that’s not cheesy or nauseating; in this vein, I vastly admire André Aciman and Garth Greenwell. But the sex my narrator is having is objectifying and strange, which afforded me the opportunity to write with a certain level of distance that (I hope!) undercuts the possibility of cheesiness. Objectification enables precision and even, sometimes, humorous meanness. If you love someone, you don’t think about the “small snarl of his orgasm,” as my narrator does with one of the people she sleeps with.

(Ouch — but perfect, that snarl.) Are there other writers who have influenced you?

Besides Aciman and Greenwell, I’ve been most influenced by Philip Roth’s and Nicholson Baker’s forays into sexual deviance and perversion. I know I’ve missed some excellent female sex writers, but perhaps for this reason, it was especially thrilling for me to write about a female narrator’s exploits.

With a little Freud on the side — I read somewhere that he referred to women’s sexuality as “a dark continent.” How much did you know about him before you began?

In my early 20s, I started seeing a therapist who happened to be a psychoanalyst. At the time, I don’t believe I even knew what that meant, but over the years my once-a-week therapy transformed into full-blown analysis and — well, I fell in love. About 10 years ago, I took a “Basic Works of Freud” course with psychoanalyst Alan Bass at the New School, and so started reading Freud. I am very far from a completist, but I’ve read him intermittently over the years. For the novel, I read a bit more of Freud’s own works as well as Peter Gay’s Freud: A Life for Our Time and Joel Whitebook’s Freud: An Intellectual Biography, both comprehensive biographies that helped me get a handle on the relationship between his theories and his life.

But the Freud of the novel is, at the end of the day, an invention of the narrator’s, borne less of knowledge than of wish fulfillment. So I didn’t feel beholden to the facts of his life or works; they were inspiration more than prescription. And, much as I’ve read, the conception of Freud in the novel has as much to do with my experience of psychoanalysis — and of my own analyst — as with Freud, if not more.

And has your analyst read the book?

My analyst hasn’t read it yet; to her credit, she wanted to obviate my capacity to transform her into a critical presence in my mind. She wasn’t about to be judge and jury of my novel-in-progress, nor was she there to give me approval — though she was of course available to talk through my feelings and thoughts throughout the process, which were many, many, many. She’s said she’ll read it once it comes out.

How about friends and family, how have they responded?

Once I got an agent, I sent the manuscript to my immediate family; I was so nervous about how they’d receive it, and wanted to get it over with before I actually perished from anxiety. Luckily, they were mostly proud and excited and super-supportive. It did prompt some interesting discussions, as you might imagine sending your heavy-on-the-disturbed-sex novel to your parents would.

(I’m laughing.) Seriously, though, fiction or not, I’d say it was brave to have written this story in first person — and not to give the speaker a name.

I wanted to submerge the reader in my narrator’s consciousness to the greatest extent possible, and writing in first person felt like the best (or only) way to do that. It’s a particularly myopic, intense, claustrophobic consciousness, too — or, at least, that’s the effect I was going for. That was also the reason I made the controversial decision, maybe irksome or precious to some, not to name her. I certainly don’t narrate my own experience using the name “Jessica”: it’s all “I” and “me.” For someone with as little perspective as my narrator, it felt like that would be especially true. I, I, I; me, me, me! To her, there’s little awareness that things are even being filtered through her own lens; what she sees is just the world: how it is.

Which makes her a hell of a writer. I’m thinking of her eye for emotional and physical detail. That “small snarl” is a great example. And when she notices that somebody’s “gums showed when he laughed, like he was a scared animal.” Still, if she’s merciless about people (herself, most of all), not so about the place where it all happens. This book felt to me like a Valentine to New York. Are you as well acquainted as you seem? As in love?

I grew up in the suburbs and moved to the city right after I graduated college, in 2007. Since then, I’ve lived in seven apartments in Brooklyn and Manhattan. No matter how well I feel I’ve come to know New York, the discovery never ends, and not only because it’s always changing; there’s just so much to see. That said, like many people I know, I’ve had an ambivalent relationship with the city and its unrelenting intensity. Its madness is compelling beyond belief — I absolutely feel most alive in New York. But it’s also, y’know, madness.

But what about now? Do you think the city will come back to itself?

When the pandemic hit in March, I drove with my boyfriend to West Texas, where he lives, so I haven’t witnessed firsthand how the city has transformed, aside from those harrowing first couple of weeks. It’s hard to overstate the sense of mourning, and it’s strange to be mourning from afar — previously, I’d stuck around over holidays and the summer, when a lot of people went out of town. I have no idea if the city will come back to itself; it certainly seems like it will take a long time.

Seems like that would make it hard to write about, but what do you think? Are you inclined to set another story in New York? As it is, was, or will be? I guess I’m asking what you’re working on now.

I started working on a new book in early 2019, and it’s set in pre-pandemic New York (with flashbacks to a college campus in Vermont thrown in). Maybe counterintuitively, I feel even more attached to setting it in New York than I did before. Being away makes it easier to fully inhabit my imagined version of it, if that makes sense. The inverse is true, too: I miss it, or maybe more accurately I miss what it was, and am so grateful to be able to go back there in my mind.

And what about this character? Might she turn up in the novel you’re working on now? Are you still interested in her?

Dinah Lenney serves as an editor-at-large for LARB. Her latest book is Coffee (Bloomsbury, 2020). 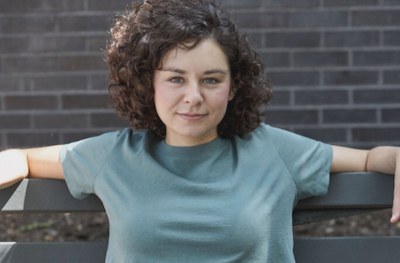