IN HIS FOREWORD to Matthew Schneider-Mayerson and Brent Ryan Bellamy’s An Ecotopian Lexicon, acclaimed science fiction writer Kim Stanley Robinson notes, “people playing with language can help bring things and events into sharper cognitive focus.” Indeed, since familiar objects and ideas often disappear to our cognition behind their own ubiquity, playing with language can illuminate the history and meaning of things that have become too everyday to loom in our consciousness. And since unfamiliar concepts struggle to appear in discursive environments that lack sufficient explanatory tools, language play can make visible things that don’t loom because we have yet to speak of them in recognizable ways.

Consider as an example of the reappearance of history and meaning this mealtime exchange between the human Susan and the extraterrestrial Hollus from Robert J. Sawyer’s science fiction novel Calculating God (2000):

“I can eat that, too, if you can provide me with about a liter of room-temperature water to go with it.”

“I’ve also made milk shakes for Tom and Ricky.”

“This is the bovine mammary secretion?” asked Hollus.

“If it is not rude to do so, I will not partake.” (emphasis added)

Hollus’s literal but nevertheless unusual characterization of milk as a biological secretion accentuates the glandular origins of the food staple. His language play gives readers a new perspective on a substance whose material provenance has vanished from our attention behind the label milk and decades of dairy industry slogans.

Hollus makes the familiar strange. Writing in the acknowledgments section of An Ecotopian Lexicon, Schneider-Mayerson and Bellamy do the opposite; they make the strange familiar, playing with language to thrust an underappreciated scientific reality to the forefront of our awareness:

This book is the product of […] the trillions of nonhuman organisms that made our work (and all of human life) possible. Thanks to the nematodes for recycling soil nutrients to enable agriculture; to the trees for producing the oxygen that we breathe every day; and to the bacteria and other microbes that comprise over half of the cells in our bodies.

The editors’ sincere gratitude toward ecological processes that sustain them is as natural as the gratefulness they express toward colleagues, friends, and family. And rightfully so. Playing with language in this way, they normalize a too unfamiliar truth: trillions of nonhuman lives make human life possible.

That there is value in such language play is the core contention of this book. An Ecotopian Lexicon presents 30 loanwords, borrowed from creative and cultural sources, that underscore concepts central to the question of human flourishing in uncertain times. Whether by defamiliarizing the mundane or familiarizing the strange, these loanwords “change our cognitive maps of the world,” reorienting us to forgotten cultural and ecological histories, meanings, and concepts — or making us aware of them for the first time.

Kira Bre Clingen contributes nakaiy to the book, noting how the Dhivehi word for the Maldive Islands’ 26 predictable micro-seasons tethers Maldivian cultures and economies to environmental reality. Clingen mourns the impending recession of nakaiy from the Maldivian lexicon as these micro-seasons destabilize in the face of anthropogenic climate change. At the same time, she urges the adoption of nakaiy as an ecotopian loanword because it “offers a proactive emphasis on local place identity that is critical to adapting to climate change.”

Referencing an Evelyn Reilly poetry collection, Sam Solnick fuses apocalyptic alarmism with the politically aware tradition of Caribbean calypso to offer apocalypso as an ecotopian loanword. “[T]ragic inevitability” haunts eco-apocalyptic thinking, leading to a paralyzing hopelessness about the future. Calypsoic celebration emerged as a form of Trinidadian resistance to colonial oppression. Apocalypso thus opens the possibility of celebratory togetherness as a way forward into a future of yet-unknown social and ecological adversities.

As apocalypsoic fellowship promises to foster a diverse community rising to face adversity, the Lugandan gyebale will give us a salutation to honor the work of this community’s members, whatever their roles. As gyebale contributor Jennifer Lee Johnson notes, this appreciation may be extended to the “underacknowledged but nevertheless vital work of a suite of other-than-human beings — microbes, fungi, insects, and many others — that continue to do work for us all.”

Nakaiy, apocalypso, and gyebale speak to An Ecotopian Lexicon’s theme of adaptation. Along with the German sehnsucht, the Japanese shikata ga nai, and ecopsychology’s solastalgia, they give us “conceptual tools for reckoning with the environmental, political, social, and philosophical challenges of the Anthropocene, today and in the decades to come.” Presenting terms to facilitate our reorientation to a changed world is an explicit motive of An Ecotopian Lexicon; the editors directed their contributors “to compose an entry describing a word or phrase that would aid us in our collective task of living well in the Anthropocene.” Many of the book’s entries, and Kim Stanley Robinson’s opening, however, signal a divergent and perhaps bolder ecotopian project: developing a lexicon of prevention. From Robinson: “What we do now as a global civilization will create one future out of a vast array of possible futures.” He asks: “So what should we do?” and answers, “[W]e can do things, if we can figure out what they are.”

On the one hand, then, An Ecotopian Lexicon accepts a future of “socioecological adversity” and, in this light, presents its loanwords as conceptual tools to “adapt and flourish” in this changed future. On the other hand, many of the book’s contributors explicate ideas that inspire us to figure out what to do now to keep the worst of the “vast array of possible futures” from happening. More than a conceptual tool for living amid ecocatastrophe, Melody Jue’s Dolphinese entry ~*~ (pronounced by blowing air across the back of your hand) instigates our awareness that what we do in one place impacts other places. (What is the ~*~ on climate, freshwater, and soil of consuming the bovine mammary secretion industry’s products?) Similarly, more than a talent useful for us to navigate the decades to come, cibopathic ability — the capacity to taste in our meals the ~*~ of industrial food production — would give us pause now and, maybe like Hollus, lead us to reject some foods.

As with ~*~ and Daniel Worden’s cibopathic — borrowed from the comics series Chew (2009–2016) — the majority of An Ecotopian Lexicon’s loanwords have an eco-pedagogical function better framed as prophylaxis than as adaptation. With fotminne, a term from Kerstin Ekman’s 1996 novel Blackwater, Sofia Ahlberg writes, “we get a sense of how place undergoes change through time as people, livestock, and wildlife traverse it.” Ahlberg forwards a “cautious hope for the positive impact of present actions.” For Malcolm Sen, “[w]e inhabit an unprecedented threshold moment in the history of our species”; the Bengali and Hindi godhuli can help us act on the reality of our origin in, and dependence on, soil. Charis Boke contributes plant time to underscore our embeddedness in ecological processes, and Cherice Bock explicates watershed discipleship to call for an ecotheology rooted in bioregional literacy.

Readers of An Ecotopian Lexicon will thus come away from the book with an important question: Do we make a better future (a) by learning how to adapt to its inevitable hardships, or (b) by doing what is necessary now to foreclose the inevitability of ecocatastrophe? Maybe this question and the analysis it entails are unnecessarily dualistic. But given the confounding liminal phase we occupy in this “threshold moment,” it is probably okay to expect an answer from a book with ecotopian in its title. We sense impending social and ecological doom; do we figure out how to live in it, or do we figure out how to prevent it?

There is, of course, a less black-and-white option: (a) and (b) are complementary. Achieve one, and we achieve the other. Randall Amster’s Blockadia displays this coexistence of motives well. The term at once posits we “rededicate ourselves to surviving” cataclysm and develop “tools to resist sociopolitical injustice and ecological degradation in the present.” Evelyn O’Malley’s Gaeilge contribution misneach, too, represents a courage to “keep going on uncertain but certainly stormier days” and a courage to imagine “new presents.” Janet Tamalik McGrath’s Inuktut entry sila indicates “the interconnection of all phenomena.” With it, we can “express concern about our impacts, and convey our commitment to learning and adapting” (emphasis added).

As a whole, An Ecotopian Lexicon doesn’t advance a consistent vision for ecotopian possibility, for “better futures.” As such, the book is a perfect artifact of our complicated present. It reflects the tremendous difficulty we — inheritors of obscenely unjust and unsustainable social and economic structures — encounter in figuring out what to do about climate change, biodiversity loss, ocean acidification, freshwater depletion, and other ecological crises disproportionately impacting those who haven’t benefited from the terragouged wealth (see Chris Pak’s entry) of Cheap Nature (see Carolyn Fornoff’s entry nahual). Is it time to accept and accustom ourselves to Anthropocene instability? Is there still an opportunity to fix things? Should we live as if we’ve adapted and, in doing so, trust we are altering the Anthropocene trajectory for the better?

While Schneider-Mayerson and Bellamy don’t elucidate the adaptation/prevention problematic that An Ecotopian Lexicon’s entries collectively make evident, the book is nonetheless an effective tool for environmentalism because of the questions it raises and the thinking it forces us to do. The editors include a number of visual representations of the book’s lexical content, along with statements from their artists. This enriches the project and suggests the possibility of any of us — students, teachers, parents — continuing the development of an ecotopian vocabulary and body of art to help us conceptualize our responsibilities as socially — and ecologically — embedded citizens of a finite planet, both now and in the future. 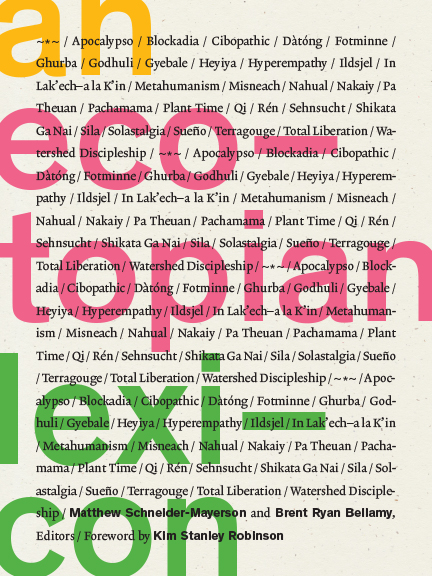