TRY AS HE MIGHT, Arthur Krystal can’t help but write elegiacally. His subjects are writing and reading, once acknowledged as practices central to being a thoughtful, reasonably well-educated person, and now the objects of casual disparagement and neglect, threatened with slow extinction. An unapologetically bookish (though seldom pedantic) fellow, Krystal does his damnedest to sound hopeful but is too honest to fall for happy talk. In “What Is Literature?,” the first of 10 essays in his latest collection, This Thing We Call Literature, he writes, “at the risk of waxing metaphysical,” that literature possesses both a Platonic form and an Aristotelian concreteness:

Although examples of imaginative writing arrive in all sizes and degrees of proficiency, literature with a capital L, even as its meaning swims in and out of focus, is absolutist in the sense that all serious writers aspire to it. Writers may be good or bad, but literature itself is always good, if not necessarily perfect. Bad literature is, in effect, a contradiction.

For members of the “adversary culture” — a phrase coined more than half a century ago by Lionel Trilling, one of Krystal’s spiritual guides — those are fighting words. One can hear the carping already: Who capitalized the “L”? And who are “serious writers”? The days when most of us could tacitly accept such assumptions are long gone. But try to put those reservations aside when reading This Thing We Call Literature, and enjoy the company of a man who most of all wants to share with you the pleasure he still takes in literature.

Krystal wears his learning lightly. His manner is charming, sometimes wistful, never thundering. He’s more Jesus than Jeremiah, and works hard not to sound cranky. In his A Dictionary of the English Language, Dr. Johnson defines “essay” as “a loose sally of the mind.” To avoid a salacious misunderstanding of “loose sally,” note another of Johnson’s definitions: a “sally” is a “frolick; flight; an eruption.” Krystal isn’t averse to the occasional “frolick,” but he is never simply a writer of familiar essays, a form fatally attractive to the self-infatuated. While he’s not shy about “I,” his motive is never merely autobiographical, and he has no precious epiphanies to foist on readers.

Krystal was a protégé of Jacques Barzun, editing the late polymath’s The Culture We Deserve. Like Barzun, Krystal has resisted specialization. His approach to books is not academic: “There’s nothing wrong with admiring Elmore Leonard without likening him to Proust or Henry James.” To this he adds: “One can be a fan of Agatha Christie, but one can’t really be a fan of George Eliot.” Tell that to the Janeites and Trollopians, and to the devotees of Lee Child and Dean Koontz. Strictly speaking, Krystal isn’t a critic at all, and he certainly has no theories to peddle. We might think of him as an enthusiastic reader who happens to write. He reminds us of the respect once shown to Dr. Johnson’s notion of the common reader, “uncorrupted with literary prejudices.”

In “Should Writers Reply to Reviewers?,” Krystal tells us he stopped reviewing books 15 years ago because “my inner préfet was always looking for an excuse to emerge.” Honest reviewers know what he’s talking about. It’s easier to be funny when writing a pan than a rave, and gratuitous nastiness has its charms. “I was worse than officious,” Krystal writes. “I was clever.” I single out this essay and its qualified mea culpa in order to underline the fact that Krystal has a conscience. He has reviewed and been reviewed, happily and less so, and is no hanging judge: “A flawed book gives no one license to flog it in print. If there are mistakes, why not sound regretful when pointing them out instead of smug?” he says, and describes book reviewing as a “public service.”

The enemies of literary culture, Krystal makes clear, are usually not the stupid — the unlettered and unwashed, brutes and book-burners — but the very smart. Theory-driven academics and critics, experimentalists and populists, boosters of the avant-garde and pulp alike, have abetted the decline of literary standards, and, as a result, literary culture. Krystal asks, “Do we still have a touching faith in the idea that literature gives life meaning?” but wisely offers no definitive answer. Each essay in This Thing We Call Literature addresses the question from a different perspective. In the tradition of Joseph Epstein and Dana Gioia, Krystal devotes an essay, “LISTEN to the Sound It Makes,” to the lingering death of poetry in our time. He begins matter-of-factly, “I miss what I used to enjoy,” and proceeds to explain. What he misses most is memorability, which, in poetry, is rooted in music, the attention paid by poets to sound of their lines, to rhythm and texture, which often depend on meter and rhyme.

Krystal cites the work of Rae Armantrout and other contemporary poets — Stephen Dunn and Mark Doty, among them — and concedes that all are “proficient practitioners,” and that he discerns in them “intelligence, shrewdness, irony, and humor.” Then he makes his move: “In short, I believe I can appreciate their poetry. Yet, in the end, I remain unmoved by it.” New, single-sentence paragraph: “Because there is no music.”

Prosody, a tool once as essential to poets as wood planes to carpenters, is now an arcane skill. Don’t worry, Krystal does not advocate marching in lockstep with iambic pentameter. On the contrary: “A poet who has gone to school with Milton, Donne, Spenser, Browning, and Tennyson can perform rewarding variations on familiar meters and fixed rhyme schemes,” he writes. “You need a good ear to write verse, but only an average ear to appreciate it.” And that is the active ingredient in Krystal’s decoction. Literature is not an exclusive realm. With time and dedication, its conventions and history are readily learned, and its pleasures revealed. Krystal explains:

Before it is anything else, a poem is sound; and as auditory sensation it is connected to respiration, heartbeat, and the brain’s synaptic firings […] And poets, who obviously learn to speak before they learn to write, join the sound of speech with the sounds of what they read in order to create rhythms not heard or read before.

The analogy with music is obvious. The ear needs training. Mingus is not Muzak. Literature is not easy. Krystal’s prose is pithy and graceful, and it’s difficult to resist quoting him again:

[L]iterature is an art and not meant to be convenient: significant poems and novels are created not for the casual reader but for those who appreciate how writers accommodate and deviate from each other’s work. This doesn’t automatically exclude the less sophisticated, but it might, and so be it.

Krystal is a mutedly funny writer, and attentive readers will discover incidental pleasures in his essays, as in “Listing Toward Oblivion,” which is devoted to literary lists, and amounts to a list of lists, a meta-list. He recovers the lists we’ve forgotten in Montaigne, Benjamin Franklin, Keats, Rimbaud, Nabokov, Cole Porter, and, best of all, Borges. In “The Aleph,” the great Argentine presumes to catalog the universe (“a silver-plated cobweb at the centers of a black pyramid”), prompting Krystal to observe: “This list is Borges, and it suggests — does it not? — the continuing incalculable exchange between the self and the world. So we catalog as we go, itemizing things seen and unseen, as we move inexorably forward, listing toward oblivion.”

Obvious here is Krystal’s celebratory impulse. In each of his essays, he reminds us there is much to lament but even more to revel in. A well-read person is more likely to be good company than a nonreader, he suggests. A love of books implies, but doesn’t guarantee, a sensibility of substance. The world is littered with bookish boors and monsters. Perhaps literature is merely the thing that fills the literature-shaped hole inside some of us. Krystal always returns to the reader, one person alone with a book and the tradition from which it emerges. As he writes in his “Author’s Note”:

So it comes down, as it must, to one reader reading, one person who understands that he or she, while alone, is still part of a select society, a gallery of like-minded readers who, though they may disagree about this or that book, know that literature matters in a way that life matters. Such readers, I believe, still exist. I wish them well. I wish them literature. And I wish them solitude.

In a nicely bookish gesture, the final lines of Krystal’s postscript echo the ending of The Great Gatsby:

The old adage that the best is the enemy of the good has fallen by the wayside, which, not ironically, makes it easier for more good books to get written, but also for more bad books to get by. So we push on, faces pressed against the screen, carried relentlessly into a future where readers who remember what literature once meant must wonder: Is this the best we can do?

This Thing We Call Literature 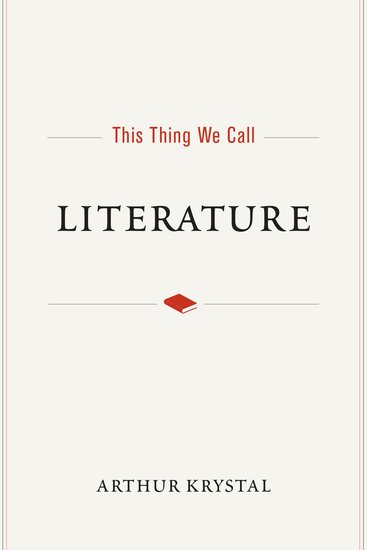