“LITERATURE,” WRITES AZAREEN Van der Vliet Oloomi, “is a nation without boundaries. It is infinite. There are no stations, no castes, no checkpoints.” This is the promise at the heart of her new novel Call Me Zebra, that the exile who lives through books can acquire a more liberated identity than the one fate has in store. It explores the seductive qualities of this idea but also its ultimate brittleness: it is one thing to be nourished by the words of dead writers, quite another to fall in love with death itself.

The novel’s quixotic heroine is a precocious exile, a restless reader cursed with a prodigious memory and merciless intelligence. Scion of a line of lavishly mustachioed Iranian intellectuals, she learns “languages the way some people pick up viruses.” It is a useful skill for the traumas to come. Her mother dies as the family flees the Iran-Iraq War, her father years later in New York City. Inspired by bands of light and shadow on his casket, she renames herself Zebra, as befits her ambiguous nature. With a gift of cash from a rogue Marxist NYU professor, Zebra heads to Barcelona to work on her grand opus, the Matrix of Literature, “a vast constellation of literary networks” created through spontaneous association and the ravenous consumption of books.

Unsurprisingly, a man gets in the way, or tries to. Ludo Bembo, a dapper Italian philologist with a disappointing lack of immigrant anguish, does his best to make love to Zebra. His reward is to serve as her occasional erotic Rocinante, alternately mounted and insulted. But Call Me Zebra is not really a love story, nor is it driven by plot. The book minutely describes a kind of psychological reality that can only be captured with an absurdist narrative. It is populated by a catalog of preposterous figures: a mysterious Dada fanatic who, in a metatextual twist, provides Van der Vliet Oloomi’s novel with one of its blurbs; a bedraggled cockatoo named Taüt (that’s Catalan for “coffin”); the ghost of Zebra’s father, who manifests from the recesses of her memory to deliver the occasional paternalistic lecture; a sculptor obsessed with carving one face in all its imagined ages; and an alcoholic Romanian drifter possessed by dead Catalan writers. These are not fleshed-out characters so much as ludicrous emanations from Zebra’s febrile mind, facets of the exile’s wandering soul.

Above all, Call Me Zebra is a filthy love note to literature unabashedly luxuriating in its bookishness. Zebra is a copyist, a memorizer who ruminates on multiple literary traditions like a medieval monk. Marked by death and yet in a sense impervious to it, she has little use for her body and is startled by the occasional culinary or sexual pleasure it affords. When she hungers, Zebra eats pages, swallowing torn-out sentences as if they’re slippery oysters: “I was ready to devour the next sentence, to eat Benjamin quoting Hegel, to consume an infinitely receding sequence of quotes.”

Ludo is Zebra’s natural foil, a university-employed lexicographer whose relationship to literature is stubbornly dispassionate and analytical. Her frustration will be understandable to anyone for whom books have provided succor in the face of annihilation, a laissez-passer out of a war zone. No wonder she suspects him, in one of her paranoid moments, of being the reincarnation of Eugene Aram, the 18th-century murderer and philologist. He cares for the dead letter, she for the living spirit of the word. Still, their sporadic but satisfying couplings hint at the closeness of the two approaches, both morbid in their own ways. While the philologist performs autopsies on textual cadavers, the mad writer Frankensteins them into a living monster. “A good book,” Zebra muses, “is cannibalistic. An object that calls up the ghosts of our past in order to reflect the haunting instability of our future world.”

Van der Vliet Oloomi’s unapologetically metatextual romp seems, for a while, intended to flatter readers with an affinity for Borges. There is a pleasure in recognizing her many literary references, an even greater charm in being nonplussed by the occasional allusion to an obscure author or unplaceable quote. At one point, the charismatic Zebra draws together a confused and unkempt group and calls them her Pilgrims of the Void. It is an apt moniker for the self-selected tribe of bookish people separated from the petty superficialities of ordinary folk by a higher sense of order and a deeper recognition of loss.

Van der Vliet Oloomi captures the shattered identity of the refugee and the immigrant, the way that literature becomes a lifeline in exile: a movable home, a network of dissent, a genealogy beyond national borders. But Call Me Zebra also steadily pushes us to see beyond Zebra’s self-congratulatory identification as one of the literary elect. Irrevocably marked by the loss of her family and native land, Zebra winds herself in a cocoon of her own narcissism.

This is the shadow side of the exiled intellectual. The world according to Zebra is divided into those complacent, delusional people who believe “in a coherent and linear reality,” and those who know how easily such a reality is shattered. Invisible hands draw lines on maps, press buttons, drop bombs, and — poof — home is a pile of rubble and the old language dries on the tongue. The exile understands the ephemerality of everyday life, but her enlightenment comes at a price: an inability to connect, to be vulnerable, to love what may be lost again.

Instead, Zebra develops a fetish for her objects of mourning, stubbornly dragging around the suitcase that still smells of her father’s corpse. Hers is a museum psychology that preserves traces of the dead past instead of creating a present. And as much as Zebra mocks philologists such as Ludo — academics for whom literature is merely a tool rather than a mode of radical survival — literature is ultimately a tool for her as well. In Zebra’s hands, book knowledge is a savage weapon, a truncheon with which to club anyone whispering dangerous words of affection.

Call Me Zebra does not invite its readers to feel — or fall — for its heroine. Much like Zebra herself, the novel demands intellectual engagement rather than emotional connection. Despite its lively prose, the story occasionally drags, as Zebra keeps traveling while never seeming to reach her goal. But in denying readers some common pleasures of reading — absorption, escapism, empathy — Van der Vliet Oloomi conveys the cold loneliness of Zebra’s grief all the better. What Zebra must learn over the course of her romantic quest through the Catalan countryside is that if suffering is an eternal constant, so, in the end, is love.

Irina Dumitrescu is Professor of English Medieval Studies at the University of Bonn. She is the author of The Experience of Education in Anglo-Saxon Literature (Cambridge, 2018). 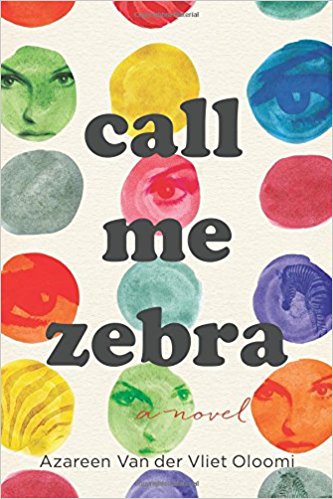