ABOUT THOSE BITTER ARGUMENTS among Israelis: The people whose opinions are detested by both sides might be correct. “Both the left and right are correct,” Micah Goodman writes in his new book Catch-67: The Left, the Right, and the Legacy of the Six-Day War. “The arguments for both sides have proven valid. Hence the crisis.”

Goodman, best known until now for a brilliant book about the rabbi Maimonides, a surprise best seller in Israel, refuses to traffic in the old clichés. Catch-67, despite its title, is not really about the Six-Day War but about what Israel can do to break the stalemate with the Palestinians, the fallout from decades of failed peace talks.

Goodman wants to repair Israeli political argument, which he knows is badly broken. The debate about peace has devolved into mudslinging and catchphrases. The right sees Palestinians as a security threat that must be kept under control. The left still looks to them as partners for peace. “One camp is afraid of returning to Egypt, and the other camp is afraid of turning into Egypt,” he says. Both have a point, but neither will admit that the other side has one, too.

“When conversation dries up, creativity dries up along with it,” Goodman writes. The goal is to produce new ideas, and for this we need to throw away the usual slogans. The problem is a deep one, but Israel’s ways of talking about it are shallow.

Ask an Israeli whether the nation should evacuate Jews from the West Bank and surrender it to Palestinian rule, as Sharon did in Gaza. You are likely to get one of two responses: “Are you crazy? Look what happened in Gaza!” or “It must be done, if Israel wants to remain a Jewish state.” The first answer ignores the rights of West Bank Palestinians and commands them to accept Israeli rule. The second answer ignores the fact that Israelis will never agree to uproot settlements on a large scale, let alone divide Jerusalem, unless Palestinians give up their claim to the land of Israel. Which they won’t. And even if they did, skeptics will ask, who can trust them?

The peace process is dead, and so Israelis now speak about Palestine for emotional release rather than out of a hope to make things better. The result is that many young Israelis are refusing to talk, or even think, about the Palestinian issue.

The question of the country’s borders is unique among Israeli political debates, Goodman writes. An Israeli’s opinions on the issue “are a part of his or her identity,” and so anyone who disagrees feels like an existential threat. Israelis, Goodman warns, must separate their opinions from their identities. The rhetoric has become far too hot, righteous, and imperiled rather than willing to compromise. The language of “darkness and enlightenment, patriotism and treason” chokes off useful discussion.

When he argues against such hotheaded, polarizing formulas, Goodman writes with forceful, searching eloquence, and his style exemplifies the openness he advocates. He combines the ethical compass of a Jewish educator with a knowledge of hard-nosed political gamesmanship. Most important, he makes pragmatism sound like the path to justice, which it is, at least in the case of Israel-Palestine. The reader gets the sense that Goodman has listened to all sides, a rare thing in a political polemic. Catch-67 is a far more absorbing, quietly provocative book than the all-or-nothing jeremiads that are the norm in discussion of Israel and the occupied territories. Goodman makes it clear that, in this case, partial solutions are the only real ones, and that pursuing them is an urgent matter.

The only way to achieve anything between Israelis and Palestinians, we’ve been told endlessly, is to achieve everything: a pledge to end all claims forever, so that the Palestinian Authority will give up rights to the land of Israel and Israel will give up rights to Judea and Samaria. But no Palestinian government has ever accepted any Israeli peace plan, and that’s unlikely to change after Mahmoud Abbas dies or retires. Palestinian leaders still promise their people that they will someday move back into their great-grandparents’ houses in Yafo and Haifa. Israeli attitudes have hardened too. Insisting that East Jerusalem must be part of Israel rather than Palestine is now a centrist position in Israel, a far cry from the days of Ehud Barak and Ehud Olmert, who both offered to divide the city.

Political reality is a matter of group psychology, nowhere more so than in the Middle East. “The clash between these two nations,” Israel and Palestine, “is also a clash of emotions,” Goodman writes. Israelis fear Palestinians: “this fear is ancient, deep, and common to Israelis of all political stripes,” he adds. Every week the Palestinian Authority foils terrorist plots against Israelis. But it also praises successful terrorists as “martyrs,” and this ambiguity frightens Israelis.

Palestinians have their own pathology, and it’s just as legitimate as the Israeli one, Goodman stresses. Palestinians feel humiliated by Israel: deprived of their rights, harassed, dependent on their powerful neighbor. Their sense of humiliation is tied to the centuries-long decline of Islam as a global power, just as Israeli fear of victimhood remains connected to Jewish history, including the Arab nations’ effort to wipe their country off the map.

We must accept both the Israeli fear of terrorism and the Palestinian yearning to be free of humiliation. These are realities, not myths to be wished away. The Second Intifada is not a detail of history: people scattered in bloody pieces on buses will not be forgotten. Hamas with its love for such slaughters is constantly trying to make them happen again. But the other side has its own truth. Every day the Israeli occupation confiscates Palestinian national rights, a situation that no people will tolerate forever.

Since 1967 Israel has been “robbing the freedom of another people,” Goodman writes, an act he forcefully labels “immoral.” Even in the absence of a peace deal, Israel can do something about this. As a first step it can support the Palestinian Authority’s claim to be an independent state. Goodman proposes building roads, bridges, and tunnels between Palestinian towns so that Israel can dismantle all checkpoints within the West Bank. Large parts of Area C, where stateless Palestinians wrestle with Israeli settlers, could then be handed over to the PA, which already governs most West Bank Palestinians. (The remaining Palestinians in Area C would be granted Israeli residence, like the denizens of East Jerusalem, Goodman suggests.) Arab neighborhoods in East Jerusalem should be transferred to the PA’s jurisdiction. Far-flung settlements, restricted by Prime Minister Netanyahu, must be curbed even more.

Israel’s ruling coalition is unlikely to sign on to Goodman’s ideas. But governments change; today is not forever. The alternative is the prospect of apartheid or revolt, especially if Israel annexes the West Bank, as some in the Knesset have urged.

Goodman rebuts the right-wing fantasy that envisions making the West Bank part of Israel and turning the Palestinians into Israeli citizens. He points out that the Palestinian population of Israel would rise from 18 percent to 40 percent, a highly dangerous percentage. Israel would then become a binational state with Jewish rights constantly under attack. Moreover, the West Bank could not be severed from Gaza: Palestinians would demand that Gazans too become Israeli citizens, and a Jewish majority in Israel would soon be a thing of the past.

Conservatives who talk about absorbing the West Bank seem to think that its Palestinians will be grateful citizens of the Jewish state. This wish-fulfillment, Goodman says, echoes the Zionists of a previous era who argued that Arabs would obviously support Jewish nationalism. Goodman cites Jabotinsky’s sardonic response to the liberal Zionists of his day, who argued that the Arabs of Palestine should welcome Jewish immigration, since it would provide jobs, railroads, sewage treatment, and other modern conveniences. Jabotinsky replied that the Arabs weren’t going to sell their national rights in exchange for quality of life, and he was right. Israel built universities and hospitals for the Palestinians of the West Bank, but they were still a conquered people, and in the long run that meant more than doctors or schools.

Israelis on all sides, Goodman writes, “are used to talking about peace as something that will ‘break out’ one day,” dissolving all difficulties and changing everything. Think in terms of degrees, not absolutes, Goodman urges. There is a degree of peace now, and it is crucial to increase it. What’s needed is humility, a realization that just as wars rarely end with unequivocal victories anymore, neither can we reach a final and unambiguous peace. Since avoidance is not an option — the situation with the Palestinians will not go away — and no conclusive peace can be reached, Israel has to try something new.

Israelis need to talk to, not just at, each other when they discuss Palestine. Goodman reminds us why Beit Hillel won out over Beit Shammai as the mainstream of Talmudic law: not because its opinions were more valid, but because Beit Hillel was willing to listen to others rather than denounce them. Hillel might be a hard act to follow in the Twitter era. But if we don’t try now, when will we?

David Mikics is a columnist for Tablet magazine and the author of Bellow’s People, among other books. He teaches at the University of Houston.

The Left, the Right, and the Legacy of the Six-Day War 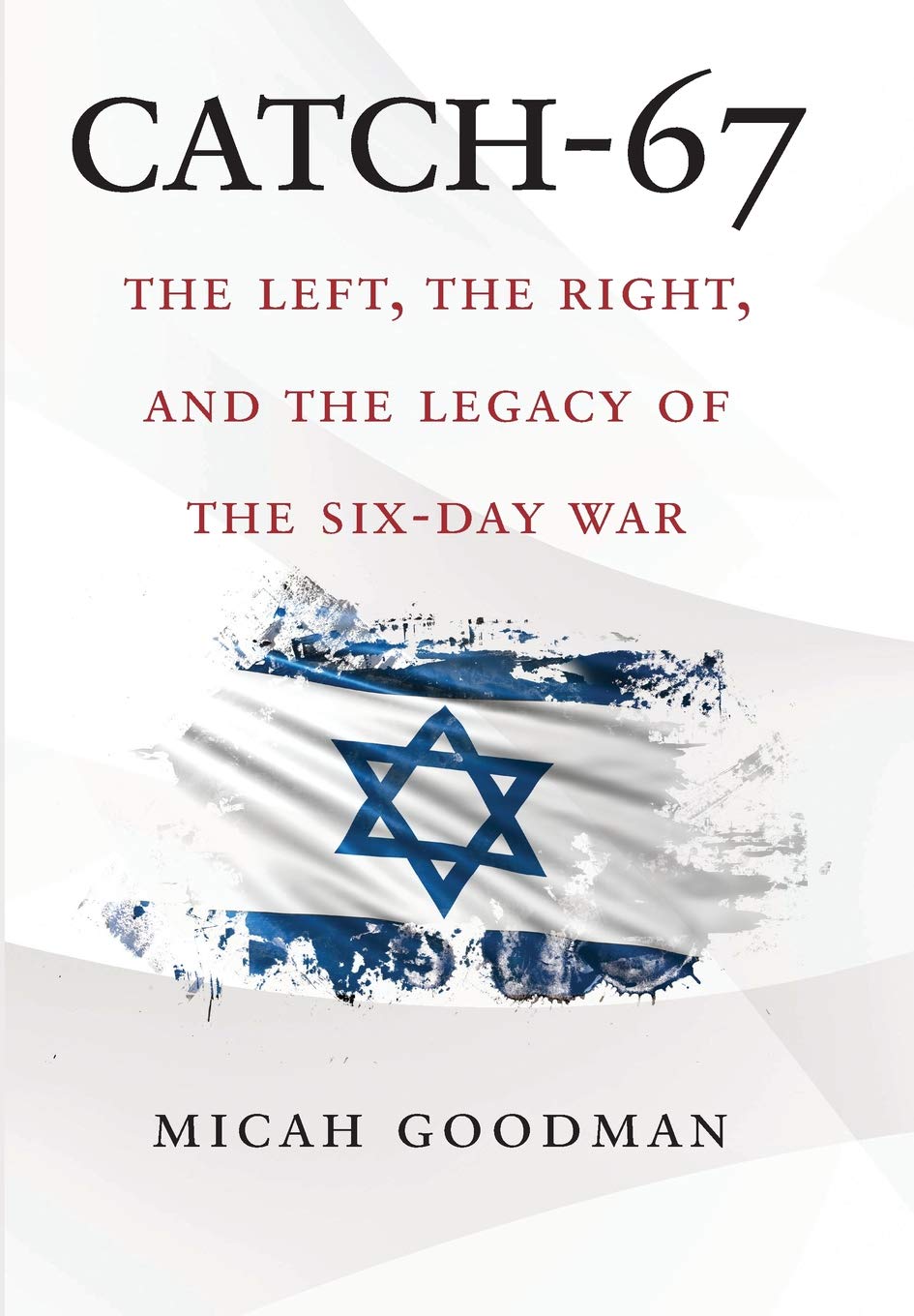