While statistics help us measure the magnitude of the coronavirus pandemic, they are less able to gauge our current outbreak of hypocrisy. Nevertheless, if public trust is the first casualty of the hypocrisy, we have reason to worry. Since the late 1950s, when three-quarters of Americans trusted the government, the percentage has cratered: under one quarter of Americans still expect our elected officials to do the right thing. Another casualty is political moderation, a position that many in both camps see as at best complacent and at worst complicit. Whereas compromise was once considered a civic value, most Americans now value it only when the compromises come entirely from the other side.

While our predicament seems dire, it is not particularly new. Indeed, it would appear déjà vu to Jean-Baptiste Poquelin, an actor (in every sense of the word) in an earlier age of equally great political extremes.

Today, France is celebrating Poquelin’s 400th anniversary. Christened in Paris on January 15, 1622, he is known to the world by his pen and stage name, Molière. One of France’s greatest playwrights, Molière is best known for his many comedies, which are replete with characters who embody the same foibles we spend our lives tripping over today: vanity, envy, misanthropy, and, yes, hypocrisy.

During his lifetime, Molière’s most controversial and most successful comedy was Tartuffe, or The Impostor. The eponymous villain, Tartuffe, is the most scurrilous of scammers. Unburdened by true Christian faith, he nevertheless makes himself indispensable to Orgon, a wealthy and pious Parisian, by pretending to be a dévot: a member of an extremist and ultra-Catholic movement whose prominence and power reached as far as the court of Louis XIV. The problem with the dévots is that they harbored not just true believers, who sought to impose their faith on others, but also phony true believers, who rode the movement for social and financial gain.

The vrai and faux true believers made life difficult not just for the young and untried king, but also for Molière, as both learned when Tartuffe was first performed in 1664. In high dudgeon, both the religious fanatics and phonies forced Louis to annul its public opening. It was only after Molière’s petition to Louis, in which he denounced the “tartuffes [who] have underhandedly had the cunning to get themselves into Your Majesty’s good graces,” that the king allowed the show to go on five years later.

Perhaps Louis saw himself in the character of Orgon. Tartuffe’s con is obvious to everyone in Orgon’s household — his brother-in-law Cléante, his wife Elmire, his children Damis and Mariane, and his servant Dorine — except to Orgon’s mother and the wealthy Orgon himself. Blinded by Tartuffe’s act, he insists, in Richard Wilbur’s nonpareil translation, that there has “been no loftier soul since time began. / He is a man who … a man who … an excellent man. / To keep his precepts is to be reborn, / And view this dunghill of a world with scorn.”

As with most dupes, so too with Orgon: if he’s in for a dime, he’s in for a dollar. All of his dollars: Orgon promises Tartuffe not just the hand and dowry of his daughter Mariane, but also his entire estate. While Mariane is left wordless, not so Cléante. “There’s a vast difference, so it seems to me,” he tells Orgon, “Between true piety and hypocrisy.” When Orgon remains unmoved, Cléante pleads, “How do you fail to see it, may I ask? / Is not a face quite different from a mask?”

But to no avail. Tartuffe is too skilled a wearer of masks, Orgon too ripe a sucker. Of course, Cléante is outraged by Tartuffe’s success, but so are we. Why? How is it that la tartufferie — a term now used interchangeably with hypocrisy — makes us bristle so?

It happens that the word “hypocrisy” issues from the Greek hupokrinesthai, which can mean “to speak in dialogue” and, by extension, to play a role. If all the world, as Jacques famously observed, is a stage, most of us spend our lives as actors. The tie I am wearing reminds me this is true for my public life. But as I examine the ties that bind me to, say, my wife and children, I face a more sobering prospect: I also role-play in my private life.

But let us pretend that an authentic self somewhere inside me holds fast to certain moral convictions. “This is who I am,” I tell not just myself, but often others as well. Perhaps too often. Whenever a divide opens between my private beliefs and my public behavior — between how I see myself and how I present myself to others — I stumble over the fault line of hypocrisy.

Such stumbles are ordinary. Little lies are part of the daily commerce of life. I give my students’ mediocre papers high grades; my students give their mediocre teacher high evaluations. Not a very pretty picture, but neither a very ugly one in an age of rampant grade and reputation inflation. If we set the moral thermostat in the moderate range, hypocrisy keeps cool. It remains an ordinary and rather benign vice.

But if we set the thermostat too high, hypocrisy becomes malignant. Take Alceste, the imperious purist in Molière’s other iconic comedy, The Misanthrope. Just as his descendant Robespierre insisted on perfect purity of revolutionary fervor and total transparency in relationships, Alceste makes the smallest misstep a hanging offense. He thus transforms his world into a moral minefield, one that strangers and servants, friends and lovers cannot cross without losing several limbs. Through the smallest gap between our actions and convictions, Alceste insists, the sewage of hypocrisy will surge.

This explains his outrage when he overhears the insincere compliments his friend Philinte pays to an acquaintance. “By God,” Alceste explodes, also in Wilbur’s translation, “I say it’s base and scandalous / To falsify the heart’s affections thus; / If I caught myself behaving in such a way, / I’d hang myself for shame, without delay.” A perplexed Philinte speaks for most of us when, in reply, he asks, “Wouldn’t the social fabric come undone / If we were wholly frank with everyone?” Ultimately, Alceste’s pursuit of sincerity punishes not only friends and strangers alike, but also him: at play’s end, this proud man finds himself utterly alone. (Unsurprisingly, Jean-Jacques Rousseau, the author of the Confessions, who also launched the 18th-century cult of sincerity, blasted Molière for making Alceste a laughingstock. It is also unsurprising that he, too, ended his life alone.)

What Molière understood is what we have forgotten: a certain kind of hypocrisy is not just an inevitable but also an imperative vice, especially in times of bitter political polarization. To disguise his motives, Cléante does not hesitate to dissemble in front of Tartuffe. Unlike this consummate con man, though, Cléante is driven by the desire to do justice on behalf of those denied it. Yet, while he is capable of indignation at the harms wrought by Tartuffe, he is incapable of the desire for revenge. Though he sees his hypocrisy as a necessary means, Cléante also sees that his own hypocrisy, which makes him like most everyone else, must also make him more tolerant and moderate toward them.

In a word, the moderate Cléante, not the moralist Alceste, is the man of true integrity. Unlike Alceste, who damns the world and himself on behalf of his purity, Cléante combines or, better yet, integrates what Molière’s society, and our own, most need: the attachment to political ideals and the acceptance of practical constraints.

At the play’s start, Cléante reflects that man, a strangely fashioned creature,

seldom is content to follow Nature,
But recklessly pursues his inclination
Beyond the narrow bounds of moderation,
And often, by transgressing Reason’s laws,
Perverts a lofty aim or noble cause.

At its close, Tartuffe’s scheme has come undone and Cléante’s call for compromise and measure allows the household to regain the peace it had enjoyed before. It was not perfect before the curtain rose, and certainly not perfect as the curtain falls, but it’s a kind of imperfection Molière, and we, can only envy.

Robert Zaretsky teaches in the Honors College at the University of Houston. His latest book is The Subversive Simone Weil: A Life in Five Ideas (2021). His new book, Victories Never Last: Reading and Caregiving in a Time of Plague, will be published this spring by University of Chicago Press.

Featured image: “Moliere cour Napoleon Louvre” by Jastrow is licensed under CC BY 3.0. Image has been cropped. 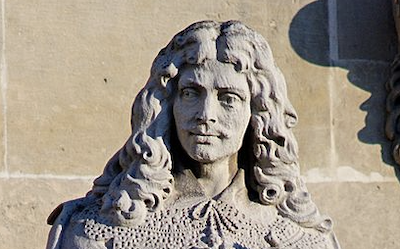 “Is Not a Face Quite Different from a Mask?”: Molière at 400