I HAVE BEEN READING and admiring the poems and prose of Jill Bialosky for over 30 years, and I have come to know well many of what Emily Dickinson might call her “Flood subject[s]”: grief, motherhood, a sister’s suicide, family and generational identity and inheritances, the rhythms of weather and of what Theodore Roethke called “Great Nature” (which “has another thing to do / To you and me”), and the salvific nature of poetry itself. In poems whose forthright linguistic clarity only increases the emotional complexity of their content, Bialosky often floats a suburban, oneiric surrealism over a nuanced attention to the keen littoral edges of experience, where meaning reverberates.

Not that Asylum, Bialosky’s most recent collection, just out from Knopf, pretends to offer up any one “meaning” with regard to her prismatic panoply of obsessions. This is a project of questing rather than a project of answers. The word “because” appears in poem after poem, not to offer a pat explanation (“this happened because that happened”), but rather to enact a seeking-out and parsing of causes for phenomena both personal and historic, quotidian or fraught with enormity: What forces would conspire to make a person not want to live, for example? How to balance fear with risk? How to survive the death of a child? What is the significance of pollen, trees, monarch butterflies? Can there be justice or redemption in the wake of unfathomable cruelty and violence? As the book’s subtitle (“A personal, historical, natural inquiry in 103 lyric sections”) indicates, this book-length poem is an “inquiry” created out of lyric parts. The effect is an articulation of a mind in the act of attempting to understand, and some of the sections are themselves made up of just one profound question: “Once we name it, does it cease to matter?” (“LX.”) or “What if it is those who survive who never rest?” (“LXII.”).

Asylum’s form — a hybrid, nonlinear series of numbered, untitled lyric poems and fragments — gives Bialosky’s lyric instincts a more epic platform, allowing her to play daringly and inquisitively with time and place — poems about the Jewish Holocaust, for example, abut with meditations on current uses of social media, particularly revelatory yoga poses, personal childhood memories, closely noted details of the flora and fauna of an imperiled planet, and many allusions and homages paid to the insights of other poets (Celan, Plath, Akhmatova, Blake, to name a few), allowing these realms of attention and experience to exchange their secrets in provocative ways. As Bialosky explores various paradoxical notions of “asylum” (safety/sanctuary, on the one hand, but also caging/imprisonment on the other), these poems take up issues of freedom, inequity, history, and isolation that could not be timelier in a moment of racial roil, immigration detention, and a pandemic quarantine. By turns symphonic, operatic, Dantean, intimate, timeless, and mythic, this quietly ambitious project is very much a book for the autumn of 2020.

According to the Merriam-Webster online dictionary, autopoiesis (from Greek αὐτo- [auto-], meaning “self,” and ποίησις [poiesis], meaning “creation, production”) is “the property of a living system (such as a bacterial cell or a multicellular organism) that allows it to maintain and renew itself by regulating its composition and conserving its boundaries.” Francisco J. Varela, in Self-Organizing Systems: An Interdisciplinary Approach (1981), writes that “the notion of autopoiesis is at the core of a shift in perspective about biological phenomena: it expresses that the mechanisms of self-production are the key to understand both the diversity and the uniqueness of the living.”

When I thought to use the word autopoiesis to describe, in part, the way Asylum works, I had in mind a parallel to “autofiction,” and in many ways Bialosky’s book reads like auto-poetry, combining hybrid elements of verse, memoir, history, culture, and science. It maps onto the biological definition above a mode of self-“creation” and presentation that is regenerative and multilayered precisely because of how, in her long poem of parts, Bialosky “regulat[es] its composition and conserve[s] its boundaries.” One thing that makes this possible are the various ways Bialosky interprets “asylum” — exploring cells and “sanctuaries” as various as the chassis of a car, an attic apartment where one poet studies and another is kept in exile, an oven “in which another poet // rested her head,” a mother’s demented mind, a thicket of trees, the raft of a yoga mat, a poem itself.

In which women
are taken from the streets,
refugees sought,
in which children are forced in pens
like pigs & separated from their parents,
in which mothers & fathers grieved
& some went mad from desperation —
one we read took his life — asylum
in which the mind seeks
to keep itself from torture,
asylum where we quarantined
to save humanity,
asylum of thought
& afterthought, asylum
where birds mate & nourish,
asylum in which to seek sanctuary,
rest, asylum we aspire to when we devote
ourselves to a practice, asylum of quiet,
of solitude, of mourning, asylum of love
& gratitude, of words born from chaos
assembled & printed on a page
made from the matter
of a tree, asylum
in which the last generation
of the monarch (or monarchy) lays its eggs
before dying, asylum of —

As Bialosky catalogs in “C.” the various ways in which we use and apprehend the notion of “asylum” — as detention, quarantine, sanctuary — we come to see that, for better or worse, the poem itself (asylum “of words born from chaos / assembled & printed on a page / made from the matter / of a tree”) is also such a place, embodying the paradox of art: an entity inviolable in its “so long as men can breathe and eyes can see” kind of way, but also vulnerable to misreading, misunderstanding, and to the risks involved in exposing and confronting our most egregious human experiences — violence, depression, holocaust, racism, suicide. The brink and cliff-drop to which the last line and its dash brings the reader allows birth (the butterfly egg) and “dying” to float over one another, stereoscopically, powerfully. The silence that ends the poem forces us to see that Bialosky believes that the endgame for the extinction and saving of civilization and the planet (“the monarch (or monarchy)”) are inextricably linked.

As we follow our Virgilian narrator through the ambages of the past, present, and future, and not in that order, conditions of hell, purgatory, and paradise illuminate one another at every turn. The allusion to Eric Garner held down by a knee (“I can’t breathe, I can’t breathe,” in “XLIX.,” which now will also summon to mind George Floyd) contrasts with the fluidity of breath in “LXXVII.,” a poem about the Virabhadrasana pose in yoga: “Our teacher says that we are spiritual warriors battling with self-ignorance, the source of all suffering. Put yourself at a distance from the insidious, from the toxic. Observe, be aware of your nature, she says. Breathe.”

In all of the poems, language, and in particular the salvific power of poetry, is interrogated, implicitly and sometimes overtly, as in “XX.”:

If someone was kind enough to take us driving out to the long roads
that veered away from cornfields to the farms, pig roasts & parties

that lasted until dawn, where on occasion we found ourselves
in bed with someone we hardly knew & woke laughing to escape

the shame & thrill of it, then for that time there was a brief sojourn
from the asylum in which the poem was held prisoner, asylum for which

Again and again, we see asylums within asylums. In “XL.,” for instance, the narrator questions why she needed to rent a small studio in order to have “a room / of my own to write.” In that space, “dirty & dark with grey painted floors / & a shared bathroom in the hallway,” a space the speaker and her young family could not afford, “no words came.” At the poem’s close, the speaker asks,

I don’t know why I needed to rent a studio
in which to encourage words that fought
against my desire to claim them.

Can poetry save one’s life, as Bialosky asks in her memoir, Poetry Will Save Your Life. “What had I done wrong?” the narrator asks in “CII.,” referring to the sister’s suicide. “Why couldn’t I save her?” Yet in another poem (“XCIX.”), Bialosky empathetically offers the sister’s answer, “The miracle is all the days I stayed alive.”

A. R. Ammons is famous for saying, “touch the universe anywhere, you touch it / everywhere,” and Bialosky’s Asylum is an embodiment of this belief. The various meanings of asylum that move through the book refuse to cancel each other out. Where one poem might touch an existential terror, another offers compassionate refuge. As we see from the poems quoted above, this happens not only across poems but also within single poems. Asylum’s searching cosmos suggests that living with these paradoxes about safety and danger and continuing to believe — in love, in language, in nature — is the only way to be fully human — feeling, accountable, caring, brave.

Lisa Russ Spaar is a contemporary American poet, professor, and essayist. She is currently a professor of English and Creative Writing at the University of Virginia and the director of the Area Program in Poetry Writing. 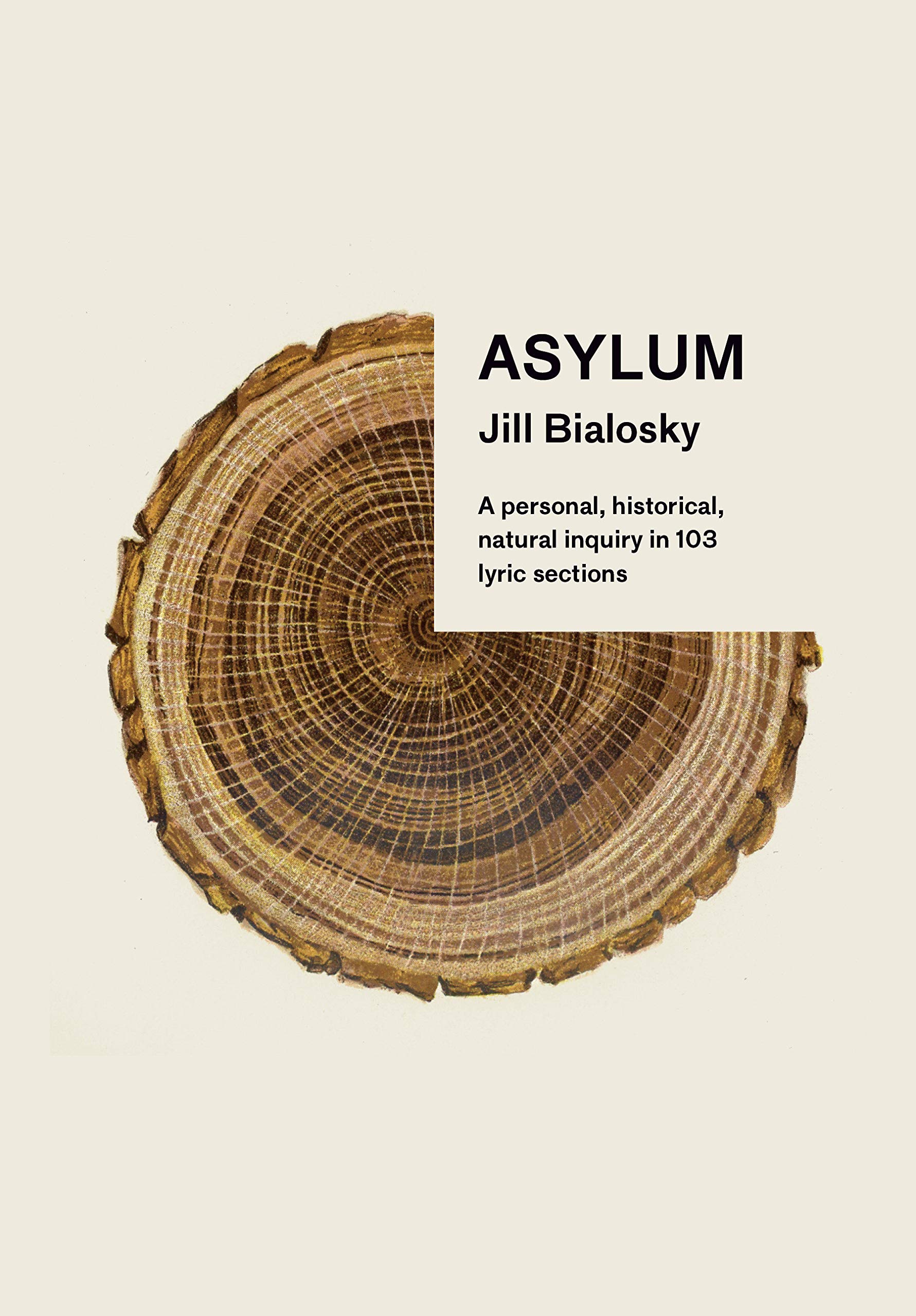