GROWING UP, MY SISTER and I spent Tuesday nights at an art studio across town. The air conditioner sputtered, and we learned how to draw a wine bottle, flowers, our hands. Was it my mother’s idea, or had we wanted to go? She can’t remember, and neither can we. Soon my sister lost interest, preferring to volunteer at a veterinary clinic, but I stayed with it, graduating to pen and ink, watercolor, and then oil paint. Hard as I tried, however, what I did on the page never seemed to match up to the things I saw at night, when I’d stare at my curtains, and see, in the darkened folds, the outline of a face or a bird or a ship. I still remember that ache, the mounting feeling that tomorrow would be the day I’d put pen to paper and recreate those lines and curves, and the dread that again I wouldn’t.

Decades later, while living in Beirut next to the mess in Syria, instead of writing very well about any of it (which still seems impossible) I was reading two books by the Croatian novelist and essayist Josip Novakovich. In dozens of stories written over a decorated and peripatetic 30 years, Novakovich has often argued that we do not have the skill to make the things on earth as beautiful as our dreams, that the world is hopelessly and permanently flawed. In his first collection, Apricots From Chernobyl, Novakovich’s thoughts and hopes turned to the highest, most complicated ideal: God, the ultimate dream, and the writer’s ultimate disappointment. In this first book, largely a product of Novakovich’s youth, he is first and foremost a son of a religious man, one who went to America and attended divinity school. Having fled his native Yugoslavia, Novakovich had to cope from a distance with his country breaking apart, to learn over a scratchy phone line that his sister was nearly blown up by a rocket, that many of his friends were either murdered or murderers, that nothing would ever be the same. After a while he gave up on God, or at least the idea that God could ever exist in this world, outside of ourselves; God and beauty, the stories suggest, exist only in our heads.

One morning in Beirut, I was tired, having woken up early to get my kid ready for school. It was sometimes hard to be excited about waking up. I sat in my child’s bedroom, the sun barely up, the birds squawking, a tiny voice demanding milk, thinking about how hard it was to write. It felt like I’d have to wait another day or a week or a month or an eternity to inch any closer to the light.

Half hungover from two glasses of wine, I dropped my daughter off at school and (instead of writing) sat on the couch reading more of this man who had given up on religion, who seemed to be disappointed in everything, including himself.

And yet the work was so damn good! His writing made me feel outside of myself. It created in my head — perhaps for just a moment, but a genuine moment — a world as vivid and real as anything I’d ever imagined. I held the book, envious, finding I could not stop. If someone had written this, maybe there was hope. There was the story of being mugged in Brooklyn. The pain of crossing borders — a stress I shared too — and an epic portrayal of cats. I took the book to bed, reading for another 45 minutes.

I finished it, only to begin reading Novakovich’s latest, Shopping for a Better Country. Yugoslavia still haunts the writer, but in this collection, there’s more grappling with an older man’s problems — death and dying, sleep apnea, a son’s intransigence, the mellowing appetites of an exile in mid-career.

In “Ruth’s Death,” Novakovich’s mother is dying, and he is back in his home village to present his bright son, a gifted cellist. The son is a certified prodigy, destined for Julliard. But Ruth — who made clogs by hand to keep the children fed — is unimpressed, or at least seems to be. For her own son, with all his books and prizes, an encouraging word isn’t forthcoming.

“It looked like he would become a reasonable and productive person,” Ruth says of Novakovich. “And then he dropped out and went into this fantasy world, which does nobody any good. Nobody reads anymore and nobody needs to, so why are you writing?”

The writing answers for itself, with remarkable stories of undeniable joy and strange optimism. In one story, “The Art of Coughing,” there is a snowstorm so vast no cars can drive. Novakovich encounters an old villager hitching up his mules. “With his white beard and red face he looked like a gaunt Santa out of employment; Santa who had never tasted salmon.” In “A Christmas in Algiers,” Novakovich can’t sleep, so he walks. It was a “peculiar” Christmas, he writes: “Policemen in boots were kicking a sleeping man in the streets. He woke up and screamed and they kept kicking him. A couple of blocks away, another couple of policemen were clubbing a man.” In “My Hungary,” Novakovich sees a palace in Budapest, then a castle and the cathedral of St. Stephen, but the skyline is broken by a Hilton Hotel, “the Pax Americana of hoteliering, with air conditioning and ample showerheads that would chlorinate you.” These moments are funny and bizarre, but never scolding — a keenly observed world of strangeness, melancholy, and cruelty.

In several of the essays, Novakovich considers the evolving problem of being a father. Whether it is his father giving him a strenuous beating just before he dies of a heart attack, or Novakovich himself battling Russian customs officers to save his son’s cello, the fathers in the stories struggle and fail. Yet the children seem to do just fine.

“You probably have many nightmares every night,” a doctor tells Novakovich.

“Doesn’t everybody?” he responds.

“No,” the doctor says. Novakovich is perplexed.

“How could you live without nightmares? What kind of life is that?”

One afternoon while reading the book I began to drift off. I was no longer a boy but a man, a father, no longer studying the folds of childhood curtains. I was seeing not images but words, and in my half-sleep I was shaping birds and faces. I was smiling as if I could almost reach out and touch them. I felt them in my hands, poignant turns of phrase! Elegant moves, dips, a long slalom of expression.

Then an alarm was trilling, telling me it was time to pick up my daughter from school. I rolled over in the sun-warmed bed, thinking no one was home, my thoughts instead drifting back to the art classes, to my sister, who’d never agonized. She worked as an animal doctor, running her own clinic. She’d recently delivered six puppies by C-section. Meanwhile, I had written a few paragraphs. Thinking of my sister, it seemed there was an alternative to all my aching about beauty; I could do something real, like deliver puppies. I began to feel sorry for myself. Then I heard a noise from the kitchen.

“Where’s the lid to the damn pot?” my wife said.

I slipped into the kitchen.

I helped her find the lid and offered to make coffee, and then walked out to pick up our daughter from school.

As I walked down the hill, I thought this: Novakovich, one of the most forceful and original essayists in the English language, was a native of Yugoslavia and then a Croat and later an American. In the last few years he’s made Canada his new home, and I’ve heard he has plans to start teaching in the Middle East. You do not need to travel the world as widely as Novakovich to understand it. It occurred to me that no matter where you are, you can see something, late at night perhaps, and the next morning struggle to explain it. This instinct to share is one of the ways we remind each other we are alive, and that we wish to remain so. Tomorrow I would not deliver puppies. I would write more paragraphs. I would finally get it right — perhaps then, or maybe the next day.

Shopping for a Better Country 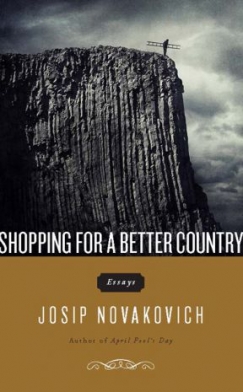