TOWARD THE END of the 20th century, the conventional wisdom around mental illness changed, with biomedical explanations blotting out Freud’s psychoanalytic theories about its root causes. In her new book Strangers to Ourselves: Unsettled Minds and the Stories That Make Us, Rachel Aviv, a journalist and staff writer at The New Yorker, steps outside of these rigid explanations to paint more complex portraits of interiority. Aviv’s book asks: What do our feelings and experiences mean before we name them? And who are we before we embrace these organizing paradigms? Is there power to be found in the incoherence of the self?

Through a handful of case studies, Aviv illustrates the ways our diagnostic and treatment frameworks for mental illness, which many in and outside of medicine have come to accept as monolithic truths, necessarily cut us off from our irresolvable humanity. Every attempt at resolution comes with its own pitfalls, which Aviv considers with empathy and analytic perspicacity. The book, as she describes it, is about people whose experiences with mental illness fall outside any “closed and complete system of truth.”

Aviv does not attempt to replace imperfect wisdom with her own. She is a dogged epistemological lawyer for opposing sides of every argument. One of the chapters that is most complex in this regard traces the life of Ray Osheroff, a successful kidney specialist who owned several dialysis centers in the mid-1970s. After a divorce, when his wife takes their sons to live in Europe and his business falters, he begins experiencing obsessive thoughts and depression. He checks into a psychiatric hospital called Chestnut Lodge, which champions therapy and psychoanalytic insight as the best way to treat mental illness of any kind.

The faculty is adamantly anti-medication. In a book Aviv cites called The Mental Hospital, Alfred Stanton and Morris Schwartz write that from its founding, the Lodge wanted to create a space that was ideologically against “a society which feared and defended against the ‘really vitally human.’” Osheroff and his therapists at the Lodge do not seem to make much headway. He can’t pull himself out of the cyclical thoughts about his supposed failures; he ruminates on the past and the external forces he believes knocked him from the apex of his life. When the Lodge’s treatment fails to cure him, he moves to a hospital called Silver Hill where the doctors prescribe him the antidepressant Elavil, plus Thorazine for agitation and sleeplessness. He regains his “power to experience” — a phrase coined by Swiss psychiatrist Roland Kuhn, cited by Aviv — and is finally able to grieve the separation from his sons for the first time.

In 1980, the medical director of the American Psychiatric Association proclaimed that the publication of the DSM-III constituted a victory of “science over ideology.” Two years later, Osheroff sued the Lodge for malpractice, citing what he called their “therapy only” approach; the lawsuit came to be seen as a watershed moment in the ideological schism between psychoanalysis and neurobiology. The preference for insight-based talk-therapy treatment that had been dominant for decades was now on the decline.

Forty years later, tension surrounding the use of medication for depression is still very much alive, but reconfigured for a new era. A CDC survey found that from 2015 to 2018, 13.2 percent of Americans were taking antidepressants, and worldwide, the number of people taking antidepressants has only increased through the pandemic years. Some journalists have suggested that more than 37 million Americans are taking SSRIs.

Despite this widespread acceptance, a few dissenting perspectives have recently punctured its authority. In April of this year, P. E. Moskowitz published an article in The Nation questioning the orthodoxy of rhetoric surrounding SSRI use to treat anxiety and depression. Moskowitz discussed how, despite the popular understanding that going off SSRIs causes no withdrawal symptoms, studies have demonstrated that over half of people who stop taking SSRIs report withdrawal symptoms, and within the studies that tested for severity, half of those people reported their withdrawal symptoms as severe. Thousands of people have gathered on sites like Surviving Antidepressants to share information on how to combat these symptoms. Moskowitz used the site to learn how to combat their own withdrawal effects after cessation of SSRIs, one of them being an adrenaline-fueled doom that persisted for months, leading them to contemplate suicide.

Like Moskowitz, Aviv notes the debunking of the commonly held belief that SSRI use is necessitated by “chemical imbalances” in the brain — that one’s anxiety or depression is merely due to an inborn or developed lack of serotonin or dopamine. A review published this year in the journal Molecular Psychiatry showed that when looking at serotonin levels in the blood and brain fluids of tens of thousands of people, there was no difference between the depressed and the nondepressed. Even when serotonin levels were artificially lowered, it did not cause depression in the nondepressed volunteers. Aviv argues that the chemical imbalance theory “has survived for so long perhaps because the reality — that mental illness is caused by an interplay between biological, genetic, psychological, and environmental factors — is more difficult to conceptualize, so nothing has taken its place.” The theory feels so clean and intuitive — absence of happiness chemicals makes you sad — that it is almost heartbreaking to discard the perfectly carved sense of it. But Aviv demonstrates why it’s worth it to surrender false reductive theories for a more complex understanding of mental illness.

Outside of studies, surveys, and statistics, Aviv wrestles with her own use of SSRIs, which she originally took for social anxiety, reporting alarming and unworkable withdrawal symptoms after trying to taper off multiple times. “[F]or the first time in my life, I experienced depression the way that it has been described in textbooks,” she writes, “as an inability to move or act. Whatever illusion sustains the belief that one’s work has meaning and relevance dissolved.” After going cold turkey on her medications to accommodate a planned pregnancy, she experienced depression and meaninglessness so intense that she considered getting an abortion. Then she went back on her medication: “Within three weeks, I felt connected again to my reasons for having a baby.” While she doesn’t “feel comfortable with the idea that a biochemical model explained why [she] felt lonely or not,” she ultimately decides to keep using the medication, saying it makes her a better family member.

The book also profiles Bapu, a woman who finds solace from her sexist environment by immersing herself in Hindu spirituality; Naomi Gaines, a mother seeking answers in a racist society after a devastating experience of psychosis; Laura Delano, a woman disavowing medication and analysis after a lifetime of diagnostic dead ends; and Hava, an anorexic woman who struggles to shake the affliction, whom Aviv met during her own hospitalization, at age six, for anorexia. Aviv sifts through each of these women’s lives and personal documents with care to chronicle their experiences with medical institutions. Anorexic, schizophrenic, psychotic — Aviv doesn’t necessarily disavow these labels, even if her subjects might. But in an effort to understand these women’s experiences, she details the intricate interplay between these women’s environments and their inner worlds.

Aviv is especially sharp in the granular — by focusing on the unique composition of each of these individuals’ perceptions, she can show how they change shape as soon as they come into contact with perceptions crafted in the forge of social history. Is Bapu consumed by religious devotion? Or is she schizophrenic, as she was diagnosed by Western medicine? Through the interaction of these two perspectives Aviv teases out a third one, one that privileges uncertainty and exploration, comparing the tethers of understanding but ultimately leaving them to form their own incomplete picture.

Years after his malpractice lawsuit, Osheroff wrote — then rewrote, and rewrote again — a memoir. He had started therapy again and viewed his depression differently. “This is not an illness,” he wrote in at least one version of his manuscript, “it is not a sickness — it is a state of disconnection.” Aviv writes,

Two different stories about his illness, the psychoanalytic and the neurobiological, had failed him. Now he was hopeful that he would be saved by a new story, the memoir he was writing. If he just framed the story right or found the right words, he felt he could “finally reach the shore of the land of healing.”

In the end, Osheroff “sensed that any story that resolved his problems too completely was untrue, and evasion of the unknown.”

Mental health narrative frameworks can liberate, and they can bind. We need them, but we have to find a way not to be trapped by them either. Aviv’s writing locates its strength not in abjuring mental health concepts or strategies wholesale, but instead showing that every framework is part of its own zeitgeist. This doesn’t make them wrong or even ineffective necessarily, but it’s important to understand in what ways they are part of a web of ideologies that shift and change over time. We should still take our solutions where we can find them, of course, as long as we don’t become too attached to an idea of their everlasting categorical truth.

Callie Hitchcock is a writer and graduate of the NYU journalism master’s degree for Cultural Reporting and Criticism. She has published writing in The Believer, The New Republic, Los Angeles Review of Books, Real Life magazine, and elsewhere.

Strangers to Ourselves: Unsettled Minds and the Stories That Make Us 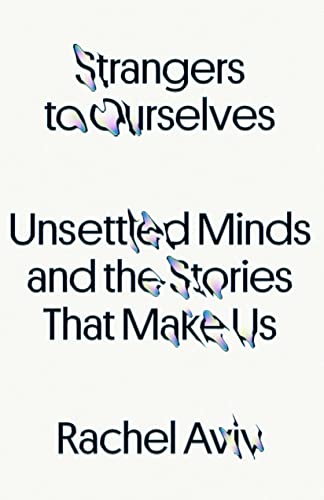