HELENE COOPER’S Madame President is a guide to getting a female head of state — though it wasn’t intended to be.

The best-selling author of The House at Sugar Beach and The New York Times’s Pentagon correspondent admits being teased by her co-workers about the title of her book before it even hit the shelves: “You’re trying to trick people into thinking it’s about Hillary Clinton.”

“I thought this was gonna be a book about the U.S. doing what the Liberian women did ten years ago and this was how they did it, but … gosh,” Cooper says, packing the retro euphemism with unspeakable dissatisfaction. A seasoned reporter and a realist, a child of a nation she describes as having a “sick sense of humor,” and a woman who knows how to use adult invectives (she’s a sports fan and spends her days around ranking military jocks), Cooper summed it all up with “gosh” when we spoke in January, the same day her paper, the Old Gray Lady herself, printed the word “lie” in a headline about a sitting president for the first time in its history.

Far less of a realist than Cooper, my heart sank when reading the sincere and optimistic note her publisher sent along with the review copy of Madame President: “In a time brimming with possibility and triumph for female leaders around the world…” Despite wanting to curl up in a ball through many of the book’s harrowing chapters, I found that I was ultimately inspired and encouraged by the strength of the book’s heroes, who fought ceaselessly for a better life in their troubled country.

Madame President is a love letter to the market women of Liberia — those ladies of endless endurance who are the very life force of their country’s economy. It’s also a celebration of their candidate, Ellen Johnson Sirleaf, the first democratically elected female leader in the history of the African continent.

One of the great lessons of Madame President is that an enormous step backward sometimes motivates nations, and women, to press forward. “Little girls do not come out of the womb vowing to become activists for female power,” Cooper writes in the book. “They don’t spend their childhood thinking about how they will repair the indignities, large and small, that bleed women daily. It’s a series of things that multiply and turn ordinary women into movements of female determination.”

“There are more and more women politicians across the continent,” said Cooper. “To understand how big a deal [that is] you have to understand how patriarchal the continent is. But at the same time, it’s always been the market women — the women with the buckets of oranges on their heads — who have run the economy throughout all these wars, throughout all of this. And now they’re realizing that they can translate some of that energy into politics, and that’s happening all across the place.”

Cooper’s voice is perfectly calibrated for this story, balancing cultural analysis, humor, beautiful turns of phrase, and a reporter’s objective detachment. This blend makes the toughest narratives in the book bearable and brings readers directly into the life of the girl who would be president.

(Of course, there are plenty of heart-crushing slogans from the opposition, too.)

This is not an alien tale about a far-flung, incomprehensible third-world nation, even though, as Cooper admits, quoting from an irreverent travel guide,

[I]n 2003, Liberia was dubbed one of the world’s worst places, among a small handful of countries that combined ‘warfare, banditry, disease, land mines and violence in a terminal adventure ride.’ […] a chaotic backwater where an escaped prisoner trained by Qaddafi plunders to the sound of American gangster rap.

As this passage suggests, it’s a kind of microcosm of the United States today; there is plenty to learn from the comparison.

When asked whom she imagined reading her book, Cooper sighed, “I don’t know.” But she does: “I want women everywhere to read it,” she continued, “anyone who’s interested in history, and that includes men, because it’s inherently interesting. I did think I was mostly writing it for a female audience. Also, though, I wish people knew more about Liberia.”

Her wish list is on target, as the book will appeal to lovers of biography, adventure, language, and pop culture. And for those interested in feminism and not familiar with the history of Liberia, Madame President is a revelation. This is indeed a heroine’s journey — a fascinating, brave, and complex narrative filled with beautiful scenes like this turning point in the woman’s movement:

For days on end, the women occupied the large expanse of the no-man’s-land in front of James Spriggs Payne Airport. Bernice Freeman, whose pregnant cousin Famatta had been murdered by Doe’s forces thirteen years before, joined the women at “Airfield,” the name Liberians gave the expanse. Wearing a white T-shirt over her loose skirt, Bernice knelt down in the sandy dirt and joined the other women to pray for peace. The women wore no adornments to beautify themselves — just the white T-shirts and the loose clothes. They sang, they fasted, and they prayed. The Holy Ghost women moved in and out of the group, leading prayers and chants and songs. The days turned into weeks, and the women still came, every day, to Airfield.

Africa’s first female head of state guided her country after a brutal civil war and managed the Ebola crisis, but her greatest achievement may have been giving other African women hope:

The ascendance of Madame to power in Liberia, and the immediate bump in the country’s fortunes that came with her inauguration, gave the air of possibility to the political aspirations of women across Africa. In the ultimate irony, Liberia, long viewed as one of the most godforsaken countries on a godforsaken continent, was now an example of democratic empowerment. If Liberian women could do it, then what of the women of Senegal and Nigeria and Ghana?

Some will accuse Madame President of letting President Sirleaf off the hook for a less-than-perfect two terms in office, but Cooper doesn’t shy away from complexity:

In African politics — like politics in the Americas, Europe, and everywhere else, there are always two worlds. One is the aspirant world, where leaders talk about good governance and anticorruption and spout platitudes about the importance of staying clean and walking the high road. In some places, maybe Sweden, some even manage to do so. And then there is the real world, where aspirant leaders — even one who cut her teeth at the World Bank and the United Nations — offer cash under the table to a warlord for his vote. Ellen played in both worlds.

There’s definitely an analogy to Hillary Clinton here. I asked Cooper about it, and she agreed: “They can be very similar. They’re both highly educated, overqualified, astute, political creatures who are also technocrats in some ways. There’s a lot there. Ellen has a lot of issues, but she’s very real and knows what you have to do to get things done. And the market women were very much like that. They were going to do whatever they could to get their candidates elected. I hope that I’m as honest about all the things that are wrong with Liberia as I can be, but I also think there’s some cool stuff — and I’d like for all of that to come through.”

Asking Cooper how she imagined Leymah Gbowee, an activist who shared the 2011 Nobel Peace Prize with Sirleaf, might react to the book, she replied: “I don’t think she’s going to like it. She fell out with Ellen. When they both won the Nobel, it was a ‘my sister, my daughter’ sort of thing.” The falling out may have been rooted in competition, but Gbowee’s criticism wasn’t baseless. “She accused Sirleaf of not doing enough to combat corruption in Liberia,” Cooper continues, “which is certainly true. She started criticizing Sirleaf a lot more on the international stage and a lot of the criticism is justified. Corruption in Liberia is still so endemic, but given all the other issues in the country I’d probably cut her more slack than Leymah would.”

To underscore why we might also cut Sirleaf slack, Cooper offers this example: “Unlike most Liberian presidents, she is leaving. She is not installing herself in power. This will be the first time in Liberian history we’ll have a post-president. There’s no tradition of that. They get hauled out to international war crimes tribunals, assassinated, or whatever.” Cooper still finds this hard to believe: “The last few months, I kept asking her, ‘You’re not going to extend your term, right?’ and she’s like, ‘Absolutely not.’”

Chris Fink is the creator of StudyLaB. He runs the educational graphics firm, Protagraphics, and is a raving ecofeminist. 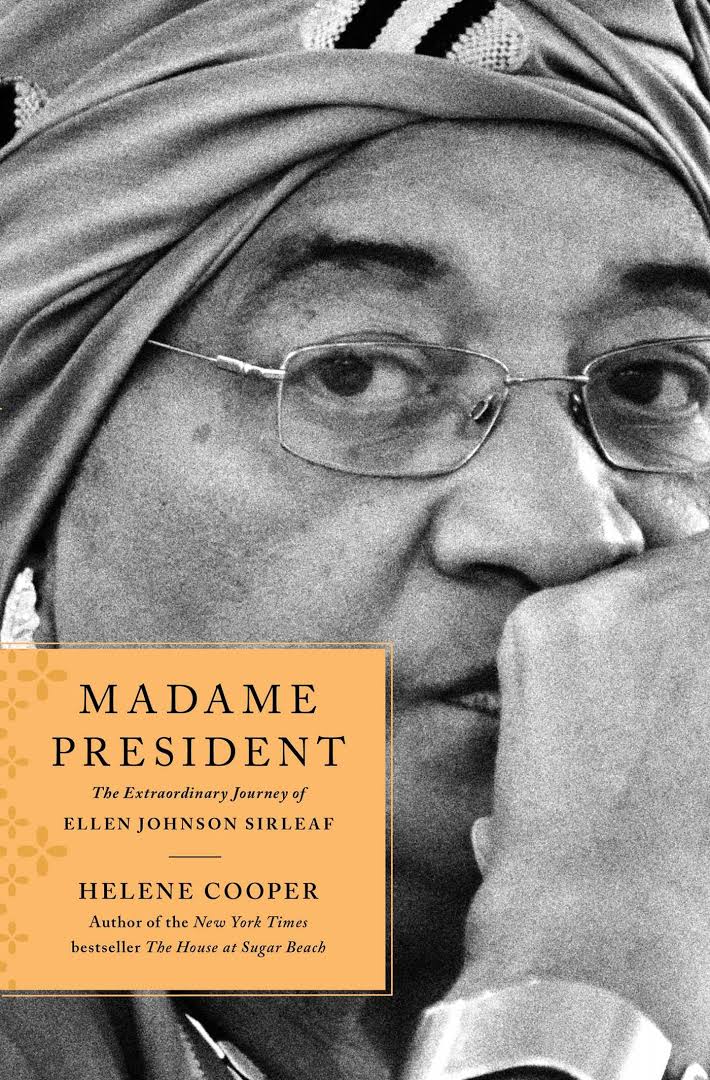 How to “Madame President”