“I AM SICK of the Jews!” the 42-year-old Patricia Highsmith exclaimed at a dinner party (the hostess was Jewish). At another party, Highsmith inscribed a number on her forearm, mocking concentration camp survivors. The Holocaust, according to her, should have been renamed the “Semicaust” for its regrettable failure to accomplish full extermination. For about 40 years, she kept sending pseudonymous letters to newspapers calling for the abolition of Israel. Jews (as well as Blacks, and Catholics) were at fault for all society’s ills. To make matters worse, a conspiracy of “Yids” made ham sandwiches disappear from transatlantic flights. “If the Jews are God’s chosen people — that is all one needs to know about God,” Highsmith proclaimed.

The thriller writer “shifted between a personality that was seemingly charming and another presence that was utterly ghastly,” writes Richard Bradford in his biography, Devils, Lusts and Strange Desires. “Highsmith knew that those closest to her were appalled by her views and her expressions of them, which is why she continued to do so.”

Patrica Highmsith was a troll, reveling in her ability to create conflict, embarrass others, and provoke anger. If verbal histrionics didn’t accomplish it, then a bunch of snails in her purse would provide the shock factor. Or swinging her cat in a bag — only in order to share the joy of drunken dizziness with the pet, as she told her horrified guests.

She was also constantly changing partners, each short-lived relationship ending in a hell of her own making: Rosalind, Ginnie, Kathryn, Allela, Ann, Jean, Ellen, Lynn, Doris, Marijane, Daisy, Marion, Tabea, Monique — the list could go on, and occasionally included male lovers, too. She liked men better than women, but not in bed. “It is obvious that my falling in love is not love,” she judged, “but a necessity of attaching myself to someone.” She spent the latter part of her life alone, and died alone, a bottle of gin her only steady companion. Drunk from daybreak until nightfall for most of her adult life, she managed to produce masterpieces — Strangers on a Train (1950), The Talented Mr. Ripley (1955), This Sweet Sickness (1960) — yet many of her later novels descend into preposterous incoherence. The seed of the first Ripley novel was planted when Highsmith saw, from her balcony in Positano, a young man walking on the beach with “an air of pensiveness about him, maybe unease.” She’d never let go of that briefly glimpsed figure and would go on to write four more novels featuring the same murderous conman: Ripley Under Ground (1970), Ripley’s Game (1974), The Boy Who Followed Ripley (1980), and Ripley Under Water (1991). Another one, Ripley’s Luck, remained unfinished at the time of her death. An attachment — to a figure of her own imagining — metastasizing in the absence of human connections, like a hoarder’s trove.

Highsmith in Europe resembled, her friends say, an exile rather than an expat — an exile from the United States, from the human community, and even from time itself. Born in 1921, she lived in the eternal ’50s, with that “hard, baffled look on her face” brought about by alcoholism and the irrevocable personality changes it must have caused. Yet when we watch Patricia Highsmith being interviewed on television, we cannot help but notice the vulnerability in her face, the gentle, sad voice, the feeling of brokenness. Elsewhere, talking about a friend who was looking for a sense of purpose, Highsmith quipped: “She cannot realize that life is about nothing.”

The same sense of despair permeates Highsmith’s journals, or cahiers: “I learned to live with a grievous and murderous hatred very early on”; “Perhaps it’s because I don’t like anyone”; “Today I have the alarming feeling that fantasy alone keeps me going.” She often fantasizes about murder: “Murder is a kind of making love, a kind of possessing”; in a dream, “I had two identities: the victim and the murderer.” According to Bradford, these murderous impulses and feelings of guilt and self-loathing nourished Highsmith’s fiction, the drama in her personal life serving as a catalyst for the plots of her novels.

The chill of her books is the opposite of the comfort of murder mysteries. As Auden wrote in “The Guilty Vicarage,” “the magical satisfaction the latter provide (which makes them escape literature not works of art) is the illusion of being dissociated from the murderer.” Highsmith’s novels, on the contrary, force us to identify with a murderous psychopath, and the apprehension we feel concerns ourselves. What if we are not who we think we are? What if, in our heart of hearts, we are, indeed, someone else? What if that other personality would only need a “slight defection” in order to shift to murder? I am someone else, almost every one of Highsmith’s protagonists thinks. I am a stranger to myself.

That fear of being someone else and that longing to be someone else are perfect companions in a soul that’s not at peace with itself. What is the writer’s vocation if not a constant exercise in inhabiting others’ minds? Ripley wants to be Dickie Greenleaf (and almost becomes him). David, in This Sweet Sickness, creates a whole other imaginary life, where he is William Neumeister, happily married to Annabelle. By the end of the book, having committed, with dream-like ease, two accidental murders, David feels that he has become Neumeister and hallucinates Annabelle’s presence. In Strangers on a Train, Charles Bruno wants to kill for Guy, yet he wants Guy to kill for him as well, their lives intertwined, their crimes exchanged — for “anywhere in the American continent was torture so long as Guy was there, too, and would not see him.” Guy fears being Bruno, yet knows that he is him, that Bruno is a shadow part of him, as underscored by the Plato book he leaves on the train. Love is divine madness, says Plato. But for Highsmith it is murderous madness. Nothing divine about it. The only positive novel about love she produced was The Price of Salt (1952, later rereleased as Carol), published under a pseudonym when she was 31 and featuring perhaps the first happy ending ever in a lesbian love story.

The other Highsmith novel where the main character was female happened to be the relatively late Edith’s Diary, published in 1977. (The centrality of male protagonists wasn’t incidental for a writer who thought she was, in fact, a man who loved women.) There were no attempts at changing identities in this sad, rather than suspenseful, book. All that the middle-aged Edith can do is rewrite her miserable life, making a success story of it in her diary. On the written page, Edith’s marriage hasn’t dissolved and her son is a brilliant scientist instead of a useless wanker whose masturbating into a sock and lovemaking with an inflatable doll are described in all their humiliating crassness. Such a rewrite of one’s life is a common trick on social media nowadays, yet Edith performs it in the privacy of her notebook, fantasizing strictly for herself, and then dying, senselessly, of a head wound when she tries to prevent others from seeing the text. A far cry from Guy and Bruno’s murderous bond, from the charming psychopathy of Tom Ripley, or even from David Kelsey’s obsessive inventions, the story reads like a process of giving up, like a dulling of the senses. One is who one is, and life is what it is: a drag.

Devils, Lusts and Strange Desires is the third biography of Patricia Highsmith, after Andrew Wilson’s Beautiful Shadow (2003) and Joan Schenkar’s The Talented Miss Highsmith (2009). The earlier books were more empathetic with their subject than the present one. Wilson, for instance, keenly observes the striking destruction of Patricia Highsmith’s initially beautiful face: a walking, talking, gin-guzzling picture of Dorian Gray. There was also a novel, Jill Dawson’s The Crime Writer (2016) — a thrilling imaginary recreation of the writer’s brief stay in Suffolk. What is the use of yet another life of Highsmith? With little sympathy for his subject, Richard Bradford sees the origin of Highsmith’s plots in her destructive relationships with women of higher social standing. It’s possible, but who could ever solve the mystery of creation? It may be relationship drama, or a childhood trauma, or a dream, or a fleeting impression: a face glimpsed in a crowd, a moth circling a light bulb. What makes the present biography poignant, is that there’s no redemption for a life of restlessness, despair, and torturous, doomed affairs. All the pain that drove Highsmith into that no-woman’s-land of loathing and loneliness might have indeed inspired her books. Regardless, here is a life — and, finally, an art — consumed by alcohol and isolation, a reminder that things don’t necessarily work out in the end, even for the most talented among us.

Maria Rybakova is a Russian writer currently based in Kazakhstan. Her novella collection Quaternity will be available from Ibidem Press later this year.

Devils, Lusts and Strange Desires: The Life of Patricia Highsmith 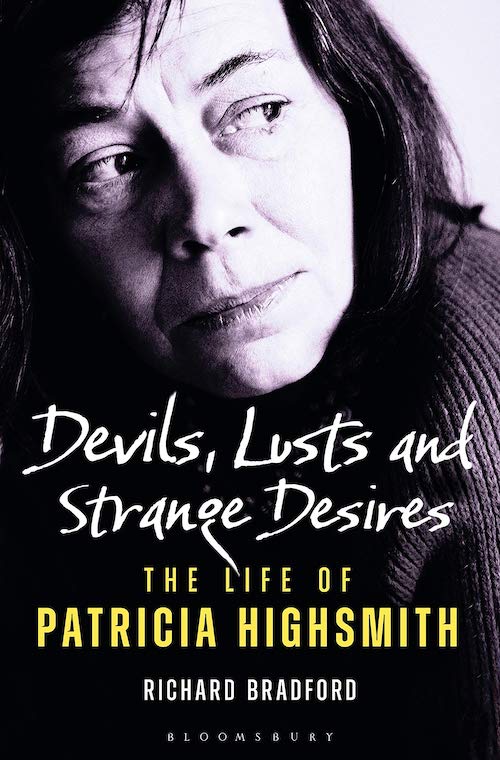