“YOU WOULD NOT SEEK me if you had not found me” — a line from Blaise Pascal’s Pensées that the novelist William Giraldi recently shared with me during an interview. It comes from a section titled “The Mystery of Jesus.” Giraldi notes that “Christ is already in him, which is how Pascal knows in the first place to seek him, to find the source or the name for the force that already pumps and hums in him.” I agree with Giraldi that it is a “lovely formulation,” which has recently led me to meander through the Pensées, well beyond that single meditation. The fragments were an attempt toward an Apology for Christianity, which Pascal never finished, leaving them both bare and broken — the sincere, imperfect notes of a seeker.

Furnace of this World, the new book by Ed Simon, arrives in a similar spirit. The author of America and Other Fictions: On Radical Faith and Post-Religion, and a contributor to The New York Times and The Atlantic, Simon has written a whole book that retains the sound and sense of Pascal’s epigrammatic notations. Simon begins by stating that he holds “no truck with systems,” which he classifies as “always inventions; ingenious and often beautiful constructions of metaphors which endlessly defer, and that only sometimes correspond to reality.” Whether we speak of “religion, metaphysics, theology,” it is important to remember that these systems are “shifting, ever mercurial, and often relative in their definitions.” Often ardent believers and ardent skeptics, of course, prefer generalizations; Simon argues for a more malleable, paradoxical view.

Such a complexity begins with structure. Pascal’s fragmentary Pensées might have been threaded into a more fluid narrative if he had lived to finish the work, but happenstance (and posthumous editorial discretion) leaves them as short, inviting observations of belief and wonder. Simon’s 36 observations, which he describes as “philosophical musings,” hold a sincere goal: he thinks the “digressive, fragmented, incomplete nature” of the book “embodies what I hope is the humble, incomplete, uncertain approach to something as grand as ‘goodness.’” He suggests — or perhaps cautions — that we read any axioms within the book as “flexible, contingent, hypothetical conjectures.”

For those reasons, it is best to read Furnace of this World as a work in the lineage of Pensées, or perhaps even the Apophthegmata Patrum — the pithy, encompassing sayings of the Desert Fathers. Simon’s framing is essential: he describes the collected observations as “proudly inexact, paradoxical, perhaps confused and confusing set of observations, ones where I very dearly hold to the necessity of goodness without being able to simply define what it is.” He is being a little clever here; Simon defines goodness not through prescription, but through process.

The definition begins with the choice of his title. “Furnace of this world” is a phrase from the poem “A Brief for the Defense” by Jack Gilbert, which begins with a pair of declarations: “Sorrow everywhere. Slaughter everywhere.” Gilbert writes of endless and universal suffering, pain in every region of the world. And yet: “The poor women / at the fountain are laughing together between / the suffering they have known and the awfulness / in their future, smiling and laughing while somebody / in their village is very sick.”

If to live is temporary, and to suffer is inevitable, then, the narrator offers, “[w]e must risk delight. We can do without pleasure, / but not delight. Not enjoyment. We must have / the stubbornness to accept our gladness in the ruthless / furnace of this world.” Simon knows it is easy, or perhaps only comforting, to rely on cynicism within that furnace. None of us wants to be burned. In response, he articulates a process of goodness that arises from a religious vision but is not dogmatic.

In an early observation, Simon wonders why we are ethically compelled to feed the hungry. Is it because we are theologically implored to do so? Because less hunger means more order in the world? The reason is plainer, more human: “[Y]ou feed the hungry because you have a stomach — and that’s where morality has to begin, not in our heads, or even our hearts, but our bowls and bowels.” It’s a sentiment that reminds me a line from Andre Dubus, drawn to the sensory in the sacramental: “I need God manifested as Christ, who ate and drank and shat and suffered, and laughed.”

For both Simon and Dubus, Christ offers a sensory genesis: a story that feels right and true, true enough to build a structure of goodness. Simon finds comfort in the fact that “[t]heology might be clear, but scripture never is.” This allows him to engage in midrash, considering the “many Judases” that haunt “our culture,” as well as the scriptural origins. “There is a gap between Judas and Jesus; their lips have either just touched, or are about too,” he writes. “And in that distance between the two there is the infinite enormity which constitutes the definition of humanity, for we all live in that space.”

It is a real space, but it is also a space for revision, and for play, and for the exact type of philosophical musings he creates in this book. Simon references the 19th-century New England preacher Hosea Ballou, who also pondered that space between Jesus and Judas. Ballou imagined “one grand moment whereby the Lord would embrace that great Adversary, and the task of creation would be complete, all redeemed in a shining flash of goodness.” Simon has his doubts for a literal apocatastasis, but thinks it is still possible

to have the deep intuitive knowledge that every moment of grace is still a reflection of that perfect, imaginary, illusory view of a world to come. Each experience of goodness, of grace, is a sacrament, prefiguring that ineffable potential of future completeness. Now, please consider: what if Judas did not kiss Christ to condemn Him, but rather that in that moment of grace Christ kissed Judas so as to bless him?

Simon has good reasons to return to Judas here — and they arise, again, from his title for the book. He notes how the Talmud — both Tractate Sanhedrin 97b and Tractate Sukha 45b — reference “a class of human being known as the Tzadkhim Nistarim,” 36 “hidden, purely righteous men and women” whose existence is essential to the world’s salvation. This idea, Simon posits, reminds us that goodness is often unseen, and that even “the smallest of victories for goodness is a complete triumph when it is viewed through the totalizing hungry eyes of absolute Evil.”

Furnace of this World, then, is a gentle argument for seeking goodness that already exists, however hidden. Maybe there won’t be an apocatastasis, “no universal reconciliation,” but Simon’s finely structured book offers that “all acts of kindness are but a kernel of resistance against the fallen world, that all are examples of that which can be better than what we so often are.” Simon is correct that there “is something radical in kindness, in tenderness, in vulnerability, in souls laid bare before each other.” His conclusion recalls another Jack Gilbert poem, “Painting on Plato’s Wall,” which contains prescient lines: “The shadows behind people walking / in the bright piazza are not merely / gaps in the sunlight. Just as goodness / is not the absence of badness. / Goodness is a triumph.”

Nick Ripatrazone is the culture editor of Image Journal, and the author of Longing for an Absent God: Faith and Doubt in Great American Literature (Fortress Press).

Furnace of this World; Or, 36 Observations about Goodness 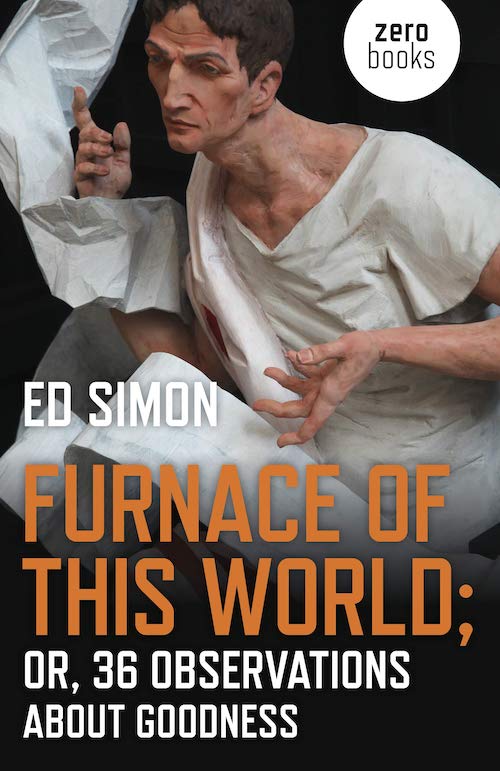