THOSE IN POWER would have us draw dividing lines between races. But the meaningful distinction between immigrants may be that between foreigners of “storied pomp” and the “tired, poor, and wretched.” That is the distinction drawn in Emma Lazarus’s “The New Colossus,” the sonnet inscribed on the Statue of Liberty, which welcomes refugees to the shores of the United States. The poem is of immense meaning in our society at this moment. Immigrant City, the latest collection of short stories by the Canadian author David Bezmozgis, should be as well. Yet the book will appear only in ebook format in the United States.

In the title story, also the first in the collection, a Soviet-Latvian-Jewish immigrant rides a trolley into an immigrant ghetto of Toronto to acquire a new door for his car. The seller is a Somali immigrant. The protagonist’s companion is his youngest daughter, who asks, “Papa, are you crying?” when they exit from the trolley. The first-person narrator, a writer and immigrant like Bezmozgis himself, has returned to a familiar place: “On either side of the street rose apartment buildings, thrumming with life and larceny. There it was, my immigrant childhood.” Suddenly, he feels the need for his non-immigrant daughter to understand the condition he once inhabited. Instead of defining himself as a white man in North America, he finds similarities with people who come from a much different part of the world than the one from which the narrator emigrated. The chain of associations is clear and poignant: seeing his child in these cramped suroundings, the narrator is brought back to his own childhood, and finds himself in solidarity with Somali immigrants.

As the story goes on, all of the petty prejudices he has acquired in his adult years also come to the surface. But he resists them and finds a connection with Mohamed, the immigrant who sells him the door and tries to recruit him to write the biography of another immigrant, who was a high-ranking official in Somalia. Such a biography would describe the life of somebody who went from “storied pomp” to “poor” and “tired,” somebody with the kind of immigration story not often told by politicians. The story ends with the narrator’s daughter saying that she wants, paradoxically, to “[g]o home and keep going,” a sentiment often felt by immigrants.

In “How It Used to Be,” which is also narrated by an immigrant writer, this sentiment is applied to a romantic relationship. The title is a phrase commonly heard in immigrant communities, but in this case it refers to the beginning of what has become a marriage with children. The story begins with a litany of complaints by the narrator aimed at his partner, the “you” to whom the story is addressed. As the story continues, a virtual reality invention allows the narrator to see his actual past — in effect, to revisit the country from which his relationship departed. The final image is of a bird saved by the partner. At her urging, the narrator wraps the bird in her sweatshirt. She then drives to find a vet, “unwilling to let it die.” What’s important in a romantic partnership, as in immigration, is not necessarily sustained happiness — it’s simply sustaining the life made together.

At the end of “Little Rooster,” a girl’s scream that turns into laughter makes for another haunting close. The narrator, an immigrant married to someone who is presumably a native-born Canadian, is very lightly entertaining the idea of adultery with another immigrant. This recapitulates the story of his deceased grandfather, whose letters, translated from Yiddish, which the narrator doesn’t know, suggest that his grandfather had an affair with another immigrant to Canada. Documents and recordings show a man whom the narrator never knew, whom he “underestimated and,” what’s most important, “under-imagined.” The story’s layered narrative, in which the mystery is revealed through embedded text our narrator only gradually comes to understand — since he doesn’t speak Yiddish or Latvian, for one thing — adds suspense and reflects the challenges of piecing together an immigrant family’s experience. The generational gap opens another double-edged connection: the grandson’s difficulty with Yiddish and Latvian probably resembles the grandfather’s with English. In the end, the girl’s scream — a fearful sound — turning into innocuous laughter can resemble the pathos of an immigrant’s linguistic misapprehension turning into bathos when apprehension comes, the drama and tension lost in mistranslation and released like “an arrow that landed between us, narrowly missing its mark.”

The relationships between generations of immigrants, specifically sons and fathers, are the concerns of the next two stories, both of which center on the Bermans, who are presumably the same family from Bezmozgis’s debut collection, Natasha and Other Stories. In “Childhood,” another immigrant, now a father, reflects on his childhood while accompanying his son on a visit to a therapist. In “Roman’s Song,” a man named Roman, who immigrated as a young adult, must resist gangsters wishing to turn his massage business, barely staying afloat, into a brothel. Both fathers’ emotions pivot on their relationship with each of their sons. However, the style of “Roman’s Song” marks a departure. The sentences are shorter. At the same time, more immigrant characters who now find themselves on unsustainable paths begin to appear. These include the aforementioned Russian-speaking gangsters and a sex worker who rebuffs Roman’s suggestion that she improve her condition with a “Fuck you.” No matter the path taken in immigration, all the immigrants trace their story back to the event of immigration. This rupture is impossible to seal, neither by familial love — such as Roman’s unrequited devotion to his son — nor by carnal passion.

The rupture is impossible to seal because it is the only portal to the life left behind, to the Old World. In “A New Gravestone for an Old Grave,” Victor Shulman returns to his native country at his father’s behest in order to arrange for the erection of the titular marker. It’s clear from the beginning that Victor feels little connection to his homeland and has burned all his bridges. He is from Los Angeles, not Canada, and this plays an important role in setting up the conflict he encounters in the country his family left when he was a child. As an American rather than a Canadian, he better plays the part of the hegemon, the undeserving, wealthy fool, who is more or less indebted to Ilya, a character who has stayed behind and has been looking after Victor’s grandfather’s grave. The feeling of indebtedness lends the story a rising sense of tension, which culminates with the transaction, a reckoning that brings out both Victor’s and Ilya’s true colors. The attitude of Ilya and other characters who have remained in Latvia suggests that the rupture of immigration can also be a rapture for those who remain. Ilya views Victor not as a Latvian but as an American, and he resents the opportunities the immigrant has been given.

Many immigrants often find themselves in just such a limbo, struggling to survive in the New World while feeling painfully cast out from the Old. In “The Russian Riviera,” Kostya, a once promising young boxer who found his way to Canada by declaring himself a refugee, is stuck in his new life as a thug bouncer at a club for Soviet immigrants. With his backstory, Bezmozgis paints a sensitive and austere picture of the kind of situation that leads many Russians to leave. Kostya’s coach, who explained to him how he could attain refugee status, later ends up returning to Russia, where he believes things will be different after the Soviet era has ended. Kostya remains in limbo, not having succeeded in either the Old World or the New.

At the end of the story, a Russian gangster who had threatened Kostya earlier asks him, “How did I get here?” and “How do I get out of here?” Kostya answers, “I don’t know that either,” and the blank space on the page beneath the exchange lets it echo in the reader’s mind. That reader need not be an immigrant to feel the existential dread. We all wish to “go home and keep going.”

Ian Ross Singleton is a writer, translator, and professor of Writing at Baruch College. 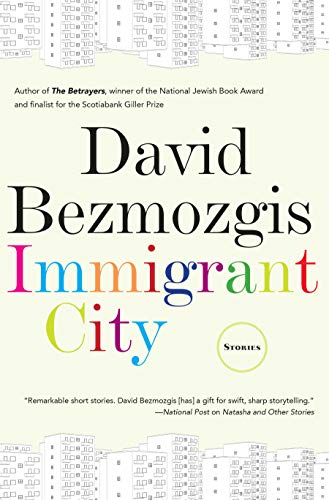