BEFORE IAN FLEMING gave us Bond, espionage writers mostly wrote about ordinary people, everyday folk who somehow slipped into the spy business. Their heroes/antiheroes invariably found themselves in the right, or rather the wrong, place at the right, or the wrong, time. From the start, spy fiction often relied on happenstance as a route into the trade. Somerset Maugham’s eponymous Ashenden was a rather accidental spy in Great War Switzerland, as was John Buchan’s Richard Hannay in The Thirty-Nine Steps. In the 1930s, Eric Ambler caught the mood of the times, the sense that anyone could unwittingly be caught up in Europe’s descent into madness, with characters such as Josef Vadassy, who, developing some innocent snaps in Epitaph for a Spy (1938), finds himself suspected of being a Gestapo agent. The Cold War heightened this sense that you could accidentally find yourself mixed up in espionage shenanigans beyond your control: for instance, Graham Greene’s hapless vacuum cleaner salesman, James Wormold, gets caught up in spying capers in Our Man in Havana (1958). Jonathan Coe’s likable, but equally rather gullible, Thomas Foley, the lead character and narrator of Coe’s new novel Expo 58, stands firmly in the tradition of Messrs. Vadassy and Wormold.

Coe is probably best known for his closely observed satirical portraits of modern British life such as What a Carve Up!, The Rotters’ Club, and The Terrible Privacy of Maxwell Sim. Expo 58 continues Coe’s investigation of the idiosyncrasies of Britishness but this time with the Brits abroad. The novel follows Thomas Foley, copywriter at the Central Office of Information, who daily produces missives from the British government to its people regarding the need not to drink and drive or brochures aimed at clueless foreigners explaining why they should really start to appreciate the joys of British cuisine — it is, of course, a series of thankless tasks. Foley reminds us of one of Orwell’s characters, say George Bowling in Coming Up for Air or Gordon Comstock in Keep the Aspidistra Flying. Trapped in lower-middle-class suburban drudgery, head just above water financially, little to look forward to but another day toiling at a boring job with only a Sunday roast on the weekend and a few dreams of greater things. And just like Orwell’s George Bowling, Thomas Foley finds his wife’s fidelity and dedication to their children boring. He suspects her of adultery, but only as a way really of justifying his own wandering eye and taste for a little sexual adventure overseas. A spot of exotic travel and a bit of derring-do espionage would do them all good, though sadly they’re all completely unaware of the global torments swirling around them — eternally patsies, dupes, and mugs.

Foley gets posted to rather staid Brussels and the World’s Fair (Expo) of 1958. These days the Belgian capital may not be on everyone’s list of the top most exotic or adventurous places. But in 1958, freed from soggy diapers and other chores of a turgidly average marriage in a drab, outer London edge town, Foley sees myriad opportunities for perhaps romance, continental cool, and a little waft of cosmopolitan Flemish air. The 1958 Expo is also a time for Britain, with its depleted place in the international pecking order, squeezed between the global giants of America and the Soviet Union, to try and assert itself. In 1959 the novelist C. P. Snow declared the British “natural Luddites,” igniting a debate that was to run through the late 1950s and 1960s. The literary critic F. R. Leavis dismissed Snow as being nothing more than a “public relations man” for science, belittling the arts, before Prime Minister Harold Wilson urged a “new Britain” forged in the “white heat” of this “scientific revolution.” In Brussels in 1958 Britain tried to marry both sides of its postwar, end-of-empire, self-image. Foley heads across the Channel to oversee the British Pavilion, largely centered around a replica piece of machinery that somehow advances nuclear science and, of course, a replica pub — The Britannia. His job is to attempt, as British delegations to Expos still do every few years, to somehow tie together a sort of ancient merry olde England image of tankards of warm beer, hearty pies, and salt & vinegar crisps with the “white heat” of technology.

Expos are a strange thing, shrunken, enclosed versions of the globe. But they can be a great setting for a novel. Nobody is quite sure why they still happen (and weren’t much wiser back in 1958). Participant countries claim to be fostering international fraternity and globalism but spend the whole time promoting their own earthly patch of land as better than anywhere else. But they are also sexual melting pots on a par with Olympic Villages. I was a regular visitor to the Shanghai Expo in 2010 while living in that city, and Britain brought in a top architect to design a highly original pavilion (dubbed, perhaps inevitably by Fleet Street, the “Hairy Arse”) showing off the latest in plant genetics and some pictures of the Tower of London. As is usual at an Expo — even ones, like Shanghai, that claim to be “green” — the whole thing cost UK taxpayers a cool £25 million, stood for six months, and was then demolished! The only people who had any fun were those flown out there and paid a salary who spent their time drinking the beers of many nations and flirting with foreigners of the opposite sex.

Espionage and Expos are two of the most absurd practices in the world. In both people pretend to be one thing — allies or globalists — and then turn out to be something else entirely — enemies (or at best frenemies) and jingoistic patriots. Foley steps into this world and he is immediately embroiled in plots both of the romantic and the spying kind. Coe pulls off the trick of making a slightly clueless ingenue appealing. Foley recognizes the folly of the Expo, sipping his beer in the British pub transplanted to Brussels — “the Britannia was a fake: it was a fake pub, projecting a fake vision of England, transported into a fake setting where every other country was projecting fake visions of their national identity.” Foley embraces the fact that fakes are being celebrated and thinks perhaps he can reinvent himself. He ties himself up in emotional knots trying to decide whether to hop into bed with a lovely Belgian Expo guide while pondering a tryst with an American woman who may or may not be more than she seems. Lured into the ongoing espionage activity at the Expo, Foley strikes up a not entirely politic friendship with a Soviet journalist who has an unhealthy interest in Britain’s nuclear capabilities.

Coe’s Expo 58 is a world of fakery and illusion — the nuclear machine is not a real nuclear machine, the pub’s not a real pub, most people working at the Expo are undercover in one sense or another. Foley lets it all wash over him, willingly stepping out of his everyday, workaday life, and decides, in such an unreal environment, that he might as well try on a few alter egos of his own. He dons various masks to see if any of them feel more comfortable than the real Thomas Foley. It’s nice to be someone else for a bit, step out of your old skin for a while. But sometimes it’s hard, or made hard, to change back again once you’ve started a transformation … and therein lies the rub of Expo 58 and becoming a spy, wittingly or unwittingly.

This is Thomas Foley’s predicament too. Foley is forced to ask, both of his surroundings, the people he meets, and himself, “Which is the truth and which the lie?” In the end he can be any of the alter egos he tries on, or he can return to being Thomas Foley — husband, father, suburbanite, nine-to-five government copywriter. In Brussels, cycling in the shadows of the Atomium, the massive glinting symbol of the future that dominates the Brussels skyline, he literally and metaphorically comes to a fork in the road.

Paul French has written a number of books, including Midnight in Peking, winner of the 2013 Edgar Award in the Best Fact Crime category. 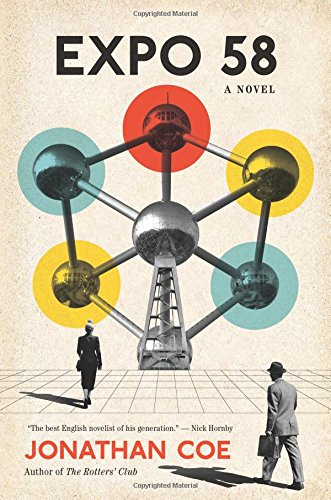