I MET ELMORE LEONARD, who died on August 20 at age 87, only a couple of times, interviewing him on his book tours, but he was a memorable guy, totally unpretentious about his massive accomplishments: 45 novels, including many best-sellers, almost a dozen made into movies and TV shows, and a reputation among the literati as one of the great writers of dialogue in our time. He wanted his books to be fun, and he succeeded. He also had fun talking about his characters, particularly the wild ones, and he was always happy to explain his famous “rules for writing,” especially “Try to leave out the part that readers tend to skip.” When I spoke with him in 2000, he had just published Pagan Babies, a comic novel on the unlikely subject of genocide in Rwanda.

JON WIENER: The story of Rwanda is a horrible one, but it’s not very well known. How did you get interested in it?

ELMORE LEONARD: Originally I was going to tell a story about a missionary Catholic priest in Africa who decides after 25 years that he should get out. Then I read Philip Gourvich’s book We Wish to Inform You that Tomorrow We Will Be Killed with Our Families. That hooked me. I wondered if I could drop my characters into the midst of this genocide, where 800,000 people were killed by their neighbors.

JW: This is a gutsy move on your part. Your readers enjoy your settings of Florida and Detroit and aren’t used to genocide as a theme of yours.

EL: Really when I write a book I’m the only one I have to please. That’s the beauty of writing a book instead of a screenplay.

JW: Your portrayal of a priest in Rwanda seemed like a step into Graham Greene country.

EL: Yes it did. I love Graham Greene: the idea of characters who are Catholic and whose religion meant something to them, as part of the plot.

JW: Pagan Babies features Father Terry Dunn, an unorthodox priest who hears confessions but for some reason doesn’t celebrate mass. There’s also Debbie Dewey, an ex-con whose goal in life is to be a stand-up comic, and there’s an unlikely assassin named Mutt. Where do you get these people?

EL: They present themselves. I didn’t think of Mutt until I got to that part of the book where a character needs a bodyguard. He could be anything; let’s see what’s fun. I never see my bad guys as simply bad. They want pretty much the same thing that you and I want: they want to be happy. I know it sounds funny. They get up in the morning, and they wonder what to wear when they are going to do a job – like anyone else.

JW: What does the title Pagan Babies mean?

EL: It’s a reference to the way money used to be raised, when I was a kid in Catholic schools, for foreign missions. “Help Save the Pagan Babies.”

JW: All of your books feature guys who are talkers.

EL: My characters have to talk, or they’re out. They audition in early scenes. If they can’t talk, they’re given less to do, or thrown out.

JW: Do you do research on your dialogue?

EL: I don’t go out and sit and listen. I’ve been involved with all sorts of people. I was an enlisted man in the navy for two and a half years. I’ve done construction work. Maybe I

I listen more than the average person.

JW: You never describe how your characters sound – there are no adverbs, just the dialogue itself.

EL: If I have described the character successfully, the adverbs are unnecessary. The only verb I used in describing dialogue is “said.” I never use an adverb to modify “said.” Another rule: I believe you should never use a semicolon in dialogue.

JW: Where did you get this rule?

EL: I made it up. The semi-colon may be grammatically correct but it doesn’t look right. Another rule: never begin a book with the weather.

JW: You started your career writing westerns. Why was that?

EL: I chose the genre because there were 25 magazines you could aim at selling to. I thought this was the place you could learn to write. So I did some research on Arizona in the 1880s, and started selling right away.

JW: What topics did you research?

EL: No. I subscribed in Arizona Highways magazine. It was all there.

JW: Three terrific movies have been made based on your work: Get Shorty in 1995, which I read made 200 million dollars; Jackie Brown in 1996 and Out of Sight with George Clooney in 1998. What was your role — did you write the screenplays?

EL: No. They would ask me what actors I saw in the roles. I would tell them, and they’d say “Oh that’s interesting.” And that would be the end of it. Writing screenplays is not my business. I’ve written half a dozen, and maybe half of those were made. But it was never a satisfying experience. It was just work. You’re an employee. You would be told what to do. Studio execs would cross out my dialogue and put in their dialogue.

JW: And you didn’t like this? They were just trying to help.

EL: Those movies were terrible. They put in the obvious things you had thrown out right away when you were writing.

EL: That’s the one that’s closest to my work, because the first half is all development of the characters. The action of the plot gets going only at that point. Robert Forster worked. I loved Pam Greer. And Samuel L. Jackson was perfect for that part.

JW: You are 75 years old. You are working at peak form. What’s your secret?

EL: Lefty Gomez said his secret was “Clean living, and a fast outfield.” Mine is something like that.

Jon Wiener is a frequent contributor to LARB [more]. 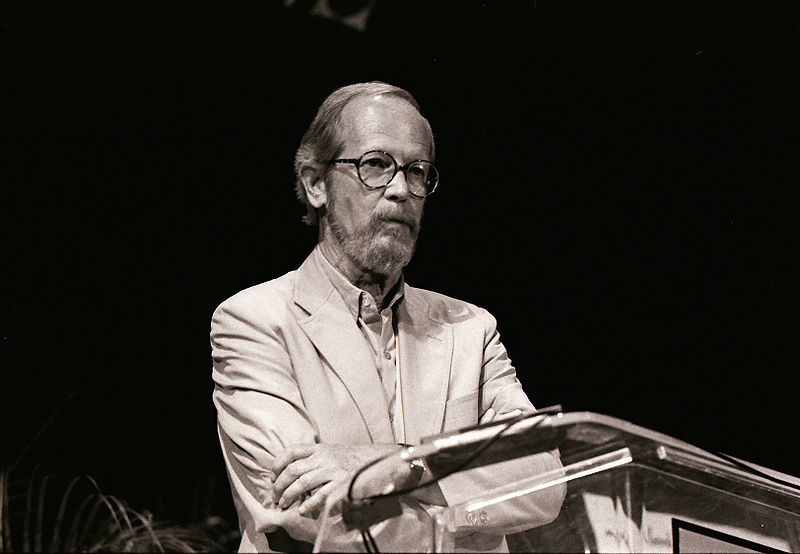