MYANMAR SEEMED HEADED for a happy ending in November 2015, when the National League for Democracy (NLD), the party of Nobel Peace Prize laureate Aung San Suu Kyi, swept the country’s landmark election, ending a period of repressive military rule. This outcome was nothing short of a dramatic screenplay: Suu Kyi, for years a political prisoner, eventually became state counsellor, Myanmar’s highest civilian role, in a triumph reminiscent of Nelson Mandela.

But from the start, it was clear that the new leadership’s task of governance would be daunting because of the fierce violence between majority Buddhists and Rohingya Muslims in western Myanmar’s Rakhine State, where conflict and refugee camps have defined the landscape.

Yet as Francis Wade contends in his book, Myanmar’s Enemy Within: Buddhist Violence and the Making of a Muslim ‘Other’, the roots of ethnic and religious conflict in Myanmar, especially in relation to anti-Muslim hatred, stretch back further than is often acknowledged. By training his analysis on relatable perspective via rich reporting, the author seeks to trace the lineage of violence, for which some of Myanmar’s present-day leading lights and even venerated monks are culpable, in an investigation that’s at once illuminating and sobering.

One of the most devastating episodes of violence erupted in June 2012, a year after Myanmar had begun its transition to a so-called quasi-civilian government, when a series of deadly riots broke out in Rakhine State. The trigger seemed to be the rape and murder of Thida Htwe, a 26-year-old Buddhist woman, by several men state media identified as “Bengali Muslim” and “Islam followers.” In days, the riots claimed over 100 lives. Some 140,000 more, mainly Rohingya Muslims, were displaced to squalid camps.

Wade’s excavation of conflict in Myanmar begins “more than a millennium before the camps sprang up along the Rakhine State coastline,” when beaches offered “a landing point for some of the first Muslims to arrive in the territory known today as Myanmar.” While the country’s old rulers carried out raids on Muslim villages for the purposes of territorial conquest and rounding up slaves, there was, noticeably, a lack of the faith-based explosions of violence seen today.

Wade uses words such as “fluid” and “porous” to describe how certain features of some of Myanmar’s early groups — for instance, the Mon and majority Bamar ethnic groups — “could be swapped back and forth at will: Ponytails would be adjusted, dress would be changed, and a Mon could become a Bamar if it meant that the marauding armies of one kingdom would spare them.”

In a more fundamental sense, then, trouble began to arise toward the end of the 19th century, when once-negotiable identities started to ossify. Britain had completely swallowed up Myanmar into its empire by 1885. It established soon thereafter a steady flow of people, from Bengal and elsewhere, as an immigrant workforce, one that, in time, became well represented within Myanmar society — and that, by the 1920s and ’30s, would begin to stoke anxieties that these new communities were “stooges of the British” that would eventually corrode Myanmar’s long-held Buddhist values.

But there was something else to this hardening of identities that was more insidious. “Britain imported its obsession with racial classification, one that had been used to such deleterious effect in its colonies elsewhere in the world. Boundaries were drawn between peoples where they hadn’t previously existed,” as Wade puts it. While Myanmar gained independence in 1948, the emphasis on ethnicity would prove to be ripe for manipulation throughout the 20th century.

Since the introduction of Myanmar’s 1982 Citizenship Law, which bestows varying degrees of citizenship, successive governments have classified the Rohingya as illegal immigrants, effectively rendering them stateless. Still today, the population isn’t among the 135 distinct ethnic groups the government recognizes; as a result, most of the 1.1 million Rohingya are without even basic rights. Though it may not be totally clear why anti-Muslim discrimination runs so deep in Myanmar, as Wade points out, it likely speaks to a vision of nationhood to which supposed interlopers, including the Rohingya, are to have no claim.

Myanmar’s Enemy Within doesn’t lean on a structure that merely unspools dry facts to make the bigger point. The book rests on a foundation of narrative, foregrounding people who can bring their own lived experiences to the history.

One story that struck me was that of Hla Hla. Hailing from Mon State, Hla Hla recounts moving, in 1988, with her family to Yangon, Myanmar’s old capital. She remembers going, when she was 10 years old, to the local immigration office to apply for a National Registration Card, which, among other things, designates to which ethnic group the cardholder belongs. Hla Hla recalls: “Although we are Mon, when we moved to Yangon, my mother said, ‘No, we must be Bamar Buddhist because this is the highest identity we can get.’” By shining a light on how Hla Hla felt compelled to “become” Bamar, Wade shows how Myanmar’s ethnic caste system politicizes the very existence of not only Rohingya, but also, truly, any group on the country’s fringes. Over and again, he deftly steps out of the way and allows these first-person stories to tell themselves.

This razor-sharp attention to narrative, both large and small, takes on particular poignancy when it focuses on the most recent developments in Myanmar’s history. Especially in the international press, there’s a tendency to sketch people in Myanmar as if they’re figures in a morality play, capable of possessing either virtue or villainy, but only rarely some hybrid of the two. This is doubly true when it comes to popular figures such as Suu Kyi. Wade doesn’t pull any punches in his rendering of the democracy icon. While the author acknowledges the incredible degree to which Myanmar’s fundamentally undemocratic system impedes the ruling party — the military-drafted 2008 Constitution, for one, enshrines the outsized power of the army — he’s forceful in his condemnation of Suu Kyi’s handling of Myanmar’s precarious ethnic situation.

Consider the rise, over the last few years, of Ma Ba Tha, a group led by ultranationalist monks. The group wields an untoward amount of influence over Myanmar’s top brass, and until recently NLD leaders had been reluctant to call out Ma Ba Tha’s exploitation of ethno-religious divides, seen in how, in 2015, the group galvanized support for Race and Religion Protection Laws that largely target Muslims. Given competing pressures, “Suu Kyi and the NLD’s decision to refrain from criticizing the monks and from calling for greater protections for Muslims may have been a politically astute calculation in the sense that it might shield her government from further attacks,” Wade writes, but this posturing was “sorely lacking from a moral perspective.”

At times, Wade’s zigzagging between personal narratives and historical meanderings feels somewhat unwieldy, which can stunt the book’s momentum. However, in portraying Myanmar’s citizenry as neither pure angels nor devils, he succeeds, with remarkable nuance and precision, at bringing the country’s intricate history into the present. Moreover, his timing couldn’t be more urgent. In August, just hours after a government-appointed commission, led by former UN Secretary-General Kofi Annan, delivered its recommendations to Suu Kyi’s government on how it might promote peace, a string of attacks on security forces by reported Rohingya Muslim insurgents in Rakhine State killed over 100 people, and it’s since spurred over 500,000 Rohingya to flee the violence by pouring into nearby Bangladesh.

Myanmar’s Enemy Within doesn’t intend to be an antidote. It does, however, explain the complex forces at work, and how mass violence, even in the country’s alleged era of democracy, hasn’t disappeared — it’s merely been displaced. (And this is to say nothing of the ongoing ceasefire efforts involving ethnic armed groups and the Myanmar army.)

“Democracy,” Wade writes, “is in the eye of the beholder. Between the act of freely casting a ballot and the fuller manifestation of equal rights to all, there is a long process of negotiation and compromise that so often becomes the site of battles over what version of the democratic ideal should take hold.” It’s in there, in hashing out who’s in and who’s out, where Myanmar’s future lies.

Brandon Tensley is the assistant editor at New America and a contributing writer for Pacific Standard magazine. He previously edited and wrote for The Irrawaddy, a once-exiled dissident media outlet focusing on Myanmar.

Buddhist Violence and the Making of a Muslim ‘Other’ 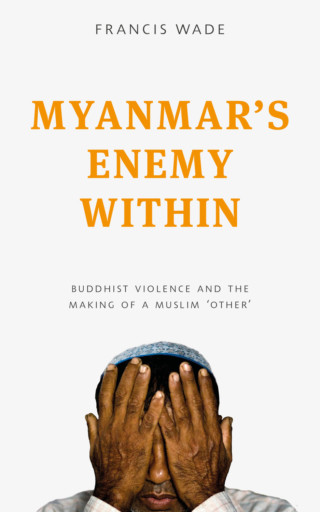